The National Investigation Agency on Tuesday took over the charge of investigation into the recent drone attack on the Indian Force station located at the Jammu airport, an official said. 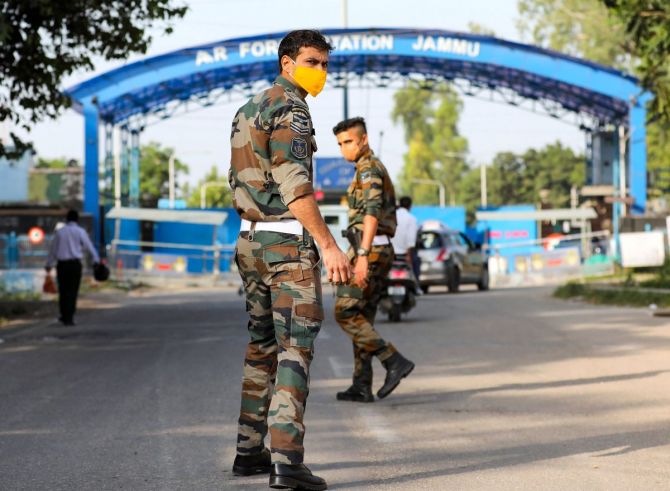 The decision to hand over the probe into the first-of-its-kind terror attack at the Indian Air Force station in the early hours of Sunday was taken by the ministry of home affairs.

In pursuance of the home ministry order, the NIA said it has re-registered the case of Police Station Satwari dated June 27.

The case was registered at the NIA Jammu under various sections of the Explosive Substances Act, the Unlawful Activities (Prevention) Act, and sections 307 (attempt to murder), 120B (criminal conspiracy) of the Indian Penal Code, an agency spokesperson said.

The spokesperson said the case relates to an explosion that occurred inside the premises of the Air Force Station, Satwari campus, Jammu and a subsequent blast, after about six minutes, carried out by drones in a well-planned conspiracy that led to the injury to two Air Force personnel and damaged the office buildings.

“While the NIA has been working with other agencies since immediately after the incident, pursuant to the re-registration of the case, requisite actions as per law, for expeditious investigation of case have been initiated,” the spokesperson said.

Earlier in the day, a home ministry spokesperson said in Delhi the investigation into the attack has been handed over to the NIA.

In what was the first instance of Pakistan-based terrorists deploying drones to strike vital installations, two bombs were dropped at the IAF station in Jammu in the early hours of Sunday.

The explosions took place around 1.40 am within six minutes of each other. The first blast ripped off the roof of a single-storey building at the technical area of the airport manned by the IAF in Satwari area on the outskirts of the city. The second one was on the ground.

Officials have also said the explosive material dropped by the drones might have been manufactured using a cocktail consisting of RDX, but a final confirmation was still awaited.

Investigators were yet to determine the flight path of the drones that dropped the bombs as they scanned the CCTV footage, including from cameras installed on the boundary walls of the airport. However, all the CCTV cameras focused on the roadside, the officials said.

The drones that dropped the explosives were either flown back across the border or to some other destination during the night, they suspect.