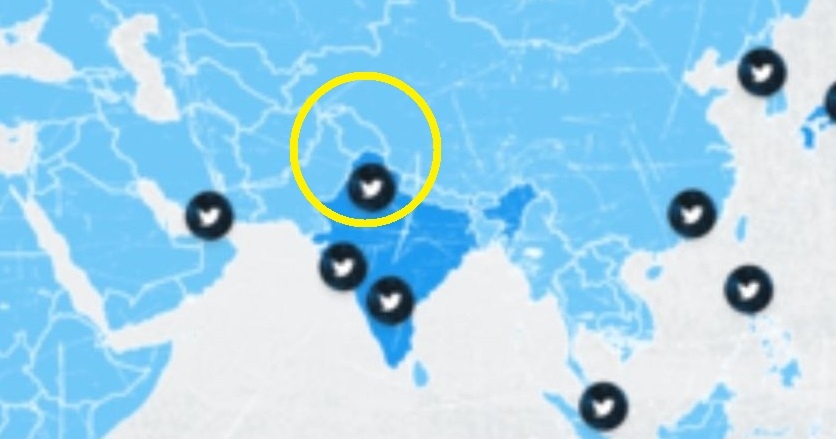 New Delhi: Amid a stand-off with the Indian government over compliance with new IT rules, Twitter committed yet another blunder Monday. The Twitter website was found displaying a wrong map of India. In the map, Jammu and Kashmir and Ladakh are shown as separate countries.

The glaring distortion appears on the career section of Twitter website under the header ‘Tweep Life’. It has triggered a heavy backlash from netizens who are demanding strict action against the microblogging platform.

This is not the first time that Twitter has misrepresented India’s map. Earlier, it had shown Leh as part of China.

A mail sent to Twitter on the issue did not elicit a response.

Notably, the microblogging platform has lost its legal shield as an intermediary in India. It has now become liable for users posting any unlawful content.

Social media users Monday slammed Twitter’s gross misrepresentation of India’s map. The global map, showing Jammu and Kashmir, and Ladakh outside India, triggered angry responses from netizens. In the past also Twitter has flouted rules on many occasions.

In October last year, Twitter came under heavy criticism and faced backlash after its geotagging feature displayed ‘Jammu & Kashmir, People’s Republic of China’ in a live broadcast from Leh’s Hall of Fame, a war memorial for fallen soldiers in the Union Territory of Ladakh.

India has issued a stern warning to Twitter that time. The government made it clear that any disrespect of the country’s sovereignty and integrity is totally unacceptable.

Sources however, said that the government is getting ready to act this time around. The government may take tough action as it does not take the distortion of the India’s map lightly and considers it a serious offence. Twitter could face financial penalties, seven years in jail for its officials and could even be blocked under Section 69A of IT rules.