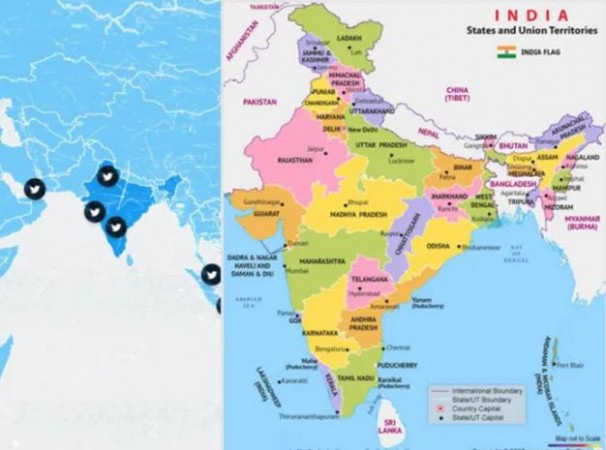 Twitter’s mistake was first caught by Twitter user @thvaranam this time. Social media users have reacted strongly against the Twitter. People have tagged several leaders including the Union Law Minister and demanded strict action. It may be mentioned that this is not the first time that Twitter is misrepresenting part of India on the map. Earlier, Twitter had shown leh’s ‘geo location’ in Jammu and Kashmir, People’s Republic of China. In this regard, on October 18, 2020, defence expert Nitin Gokhale showed through a live broadcast how Twitter was showing Jammu and Kashmir as part of China in its ‘location’.

Gokhale was live from Leh’s famous war memorial ‘Hall of Fame’ during which he explained the arbitrariness of the Twitter. He asked the Twitter why he was showing Part of China by not describing Jammu and Kashmir as part of India. The Central government had also issued a warning to the Twitter after the matter came to light. Information Broadcasting Ministry Secretary Ajay Savane wrote a letter to Twitter CEO Jack Dorsi on the issue and strongly objected to Jammu and Kashmir being a part of China through a letter.

50,000 additional soldiers and fighter jets deployed on LAC to give befitting reply to China

Urdu school vaccination camp, Don’t get vaccinated: Announced by the nearby mosque 3 times