In a fresh controversy, social media users discovered that Twitter has been using a distorted map of India on its career section which does not feature either Jammu & Kashmir or Ladakh. While Ladakh has been shown as a part of China, J&K is depicted as an independent country. This comes even as the Ministry of Electronics and Information Technology had previously written to Twitter CEO Jack Dorsey reminding him that both Ladakh and J&K are ‘integral and inalienable parts of India, governed by the Constitution of India’. Moreover, it had stressed any attempt by Twitter to disrespect the sovereignty and integrity of India, which is also reflected by the maps, is totally unacceptable. 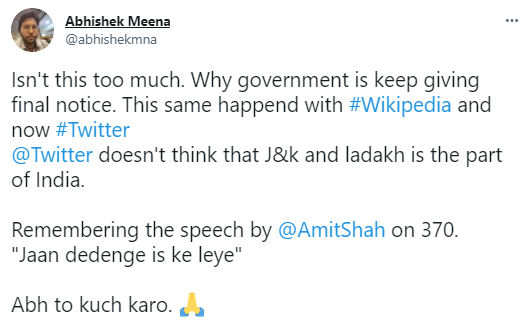 Incidentally, this is not the first time when the Indian map has been distorted. More than 6 months ago, BBC World Service stirred controversy when a graphic on its broadcast ‘US Election 2020: What do countries around the world want from Joe Biden’ depicted India without Jammu and Kashmir. This elicited a strong response from Labour Party MP Virendra Sharma who termed the action as “deeply insulting” in a letter addressed to BBC Director-General Tim Davie. Asserting that J&K is an integral part of India, he called upon the BBC to not only withdraw the graphic but also demanded action to ensure that this doesn’t repeat again.

Subsequently, the BBC apologised and updated the map of India reflecting the boundaries of J&K. Similarly, Twitter had to apologise for showing a part of J&K as Chinese territory. This controversy came to the fore on October 18, 2020, when national security analyst Nitin Gokhale noticed that his location (near Leh airport) was displaying ‘Jammu and Kashmir, the People’s Republic of China’ on Twitter.

Moreover, the Parliamentary Joint Committee on the Personal Data Protection Bill, 2019 expressed strong displeasure over the geotagging issue and asked Twitter to submit a written apology and an affidavit. The latest flashpoint comes even as Twitter has been sued in the Delhi High Court over purported non-compliance with the Centre’s new IT rules. Recently, the microblogging platform lost its “safe harbour” immunity in India for its failure to comply with the same.

This means that the platform’s top executives may face criminal liability under the Indian Penal Code for “unlawful” and “inflammatory” content posted by any user. In another development,  Dharmendra Chatur who was appointed as the interim Resident Grievance Officer has put in his papers. Twitter Global Legal Policy Director Jeremy Kessel’s name appears in that space which is against the rules as this post is reserved for residents of India.