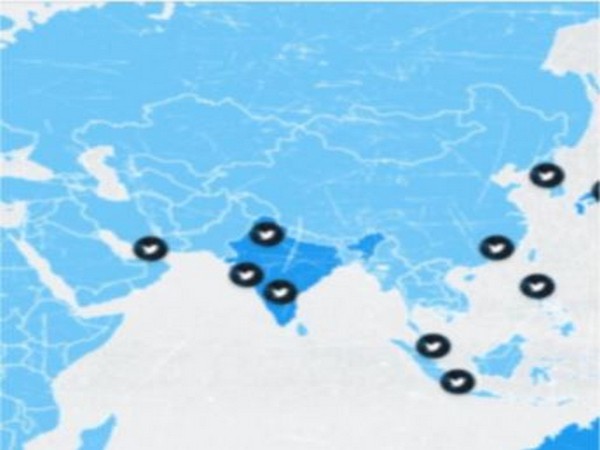 New Delhi [India], June 28 (ANI): Microblogging site Twitter has once again displayed on its website a distorted map of India, this time showing Jammu and Kashmir and Ladakh as not part of the country.

The map appears under the Twitter website’s Career section under the heading ‘Tweep Life’ section.
The distorted map has attracted criticism from several netizens.
User Levina said, “Chidiya ke parr katt do! Bahut furr-furr kar rahi hai,” roughly translating to clip the wings of Twitter as it is flying too high.
Another user deepakdkokha said, “@rsprasad is @Twitter new @PMOIndia Y such hesitancy in banning @Twitter what is the undertable dealing that @Twitter is becoming bold, anarchist day by day, humiliating citizen of Hindustan & also altering demographic map.”
Another user, Vivekmane343, said, “Twitter again showing their left face showing the wrong map of India you are still waiting for an official apology from Twitter? Show them their place this time.”
This is not the first time that the social media platform has shown the wrong map of India. In October 2020, Twitter had labelled the Indian territory of Leh in Ladakh as part of the People’s Republic of China (PRC).
The government of India had then issued a warning to CEO Jack Dorsey over the misrepresentation of the Indian map. Giving notice to Twitter, Secretary IT had said that such attempts not only bring disrepute to Twitter but also raise questions about its neutrality and fairness as an intermediary.
Now for the past several months, Twitter has been involved in a stand-off with the Indian government over the new amendments in the country’s new Information Technology laws with the microblogging platform losing its intermediary status and becoming liable for user generated content.
Among other conditions mandated by the government in the new rules for social media websites include appointment of an interim grievance officer for India and other regulations. Yesterday, Twitter’s interim resident grievance officer for India, Dharmendra Chatur stepped down days after he was appointed as per the new IT guidelines. Meanwhile, US-based Jeremy Kessel is shows as the new Grievance Officer for India on the platform. (ANI)