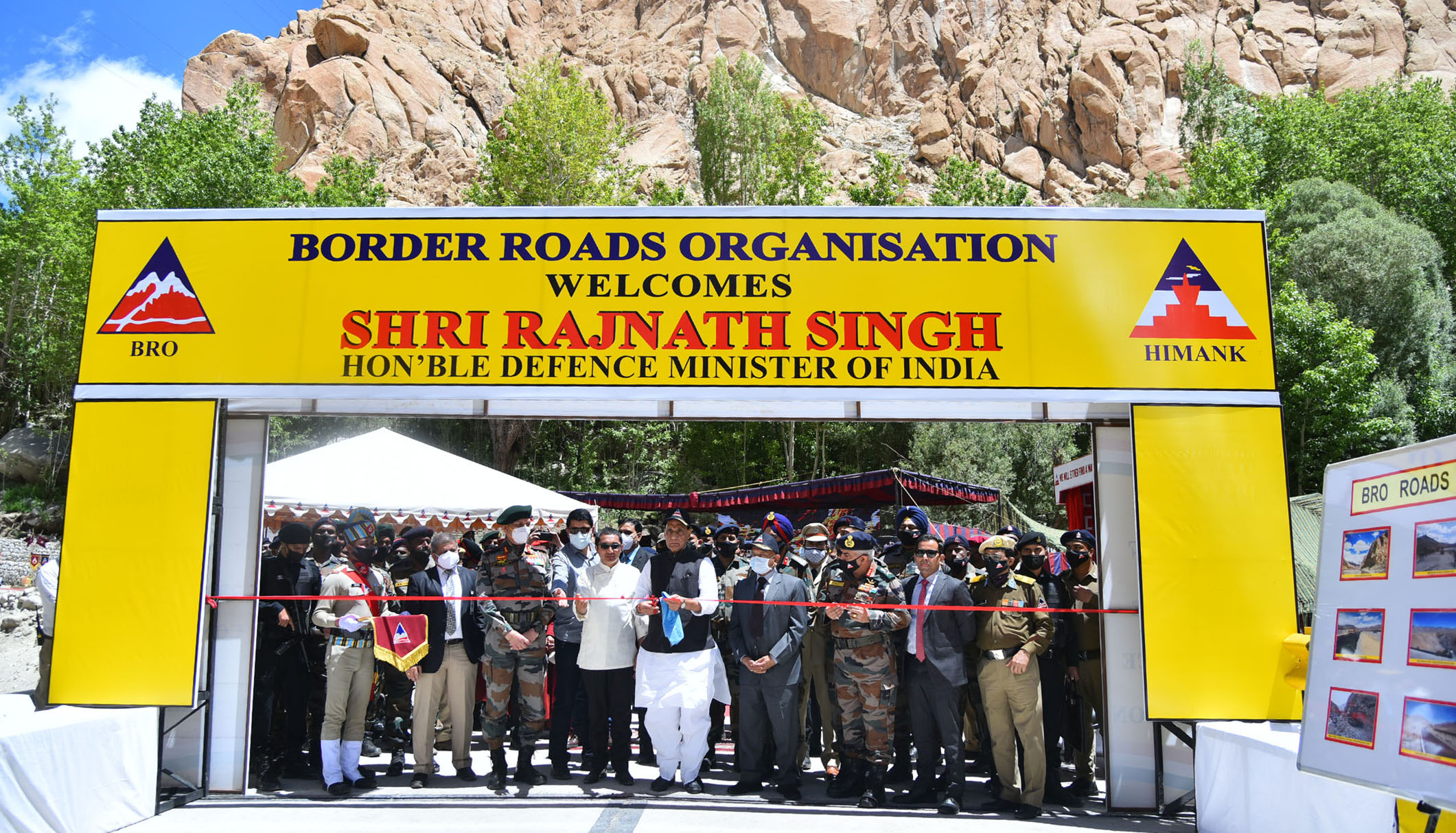 The Union Minister for Defence Rajnath Singh inaugurating a 50-metre-long bridge constructed by Border Roads Organisation (BRO) on the Leh-Loma Road, in Ladakh on June 28, 2021.

On June 25, 2021, China operationalized a bullet train running on an electric line from Lhasa to Nyingchi; 17 km from the border with Arunachal Pradesh. Headquarters of two PLA Mountain Brigades (52 and 53) are based at Nyingchi which has a population of 1,95,109. Lhasa to Nyingchi is connected by an expressway which is approximately a five hour journey. With this electric bullet train this journey can now be negotiated in three hours. There is also the Nyingchi Mainling Airport (at an elevation of 2049m surrounded by mountains over 4000m) was opened at Nyingchi in March 2017 to support both commercial aircraft and of the PLA. It has a concrete runway of length 3000m. However, due to prevailing weather constraints it is operational for only 100 days in a year. The other four airports in Tibet are Gonggar Airport (elevation 3600m) at Lhasa, Chamdo Bangda Airport (elevation 4334m), Shigatse Peach Airport (elevation 3782m) and Ngari Gunsa Airport (elevation 4274m).

China began construction of the 435.5-km long Lhasa-Nyingchi section of the Sichuan-Tibet Railway in March 2014. Starting from Chengdu (capital of Sichuan Province), the Sichuan-Tibet Railway traverses through Ya’an and enters Tibet via Qamdo. Ya’an-Nyaigchi segment is not ready. When finally completed, the rail-line will have 47 tunnels and 121 bridges. The 48 hour journey from Chengdu to Lhasa will be reduced to 13 hours. China has aimed to achieve this feat ahead of the centenary celebrations of China’s Communist Party (CCP) commencing July 1, by employing some 20,000 engineers and labourers working day and night; which unlike India is also the norm in Japan for activities like repair-construction of roads, bridges, tunnels and flyovers.

In November 2020, Chinese President Xi Jinping gave directions to expedite construction of the railway   connecting Nyingchi. Qian Feng, director of the research department at the National Strategy Institute at Tsinghua University told media, “If a scenario of a crisis happens at the China-India border, the railway will provide a great convenience for China’s delivery of strategic materials.” The Sichuan-Tibet Railway is the second railway into Tibet after the Qinghai-Tibet Railway going through the southeast of the Qinghai-Tibet Plateau. Concurrently in November 2020, China announced plans to begin construction of the Ya’an-Nyingchi section of the Sichuan-Tibet Railway spanning 1,011 km which is planned to be completed by 2030. As per Chinese media, the total cost of the Sichuan-Tibet Railway project is around Yuan 319.8 billion (US$ 47.8 billion).

In May 2021, Chinese media reported completion of a highway through the Grand Canyon of Yarlung Zangbu River (Brahmaputra), which is a second significant passageway to Medog County bordering Arunachal Pradesh. It took seven years to complete and required an investment of over Yuan 2 billion (around US$310 million).  This highway directly connects the Pad Township in Nyingchi to Baibung in Medog County, reducing the distance between Nyingchi and Medog from 346 km to 180 km cutting the travel time from eight hour to five hours. The speed with which China is developing its border infrastructure including the highway and bullet train connectivity to areas like Nyingchi for quick mobilization must be seen in backdrop of China’s 2020 aggression in Ladakh and claims to Arunachal Pradesh under the pseudonym of ‘South Tibet.

In our case, Defence Minister Rajnath Singh dedicated 12 strategic roads in Arunachal Pradesh to the nation on June 18, 2021; 10 in Arunachal Pradesh and one each in Ladakh and J&K.  73 strategically important roads totaling 4,643 km length were approved along the border with China in 1999. Of the 61 roads assigned to the BRO, 45 have been completed though connectivity has been achieved in 59 roads under BRO while seven last nine roads will be completed by March 22 and the other two by March 2023.

However, maintenance of border roads especially when handed over to the state governments needs focus. When the Bogibeel Beidge over Brahmputra River was inaugurated by Prime Minister Narendra Modi on December 25, 2018, road north of it through Assam (constructed by BRO and handed over to the State Government about two years ago) was in terrible state. Initial few km through paddy fields without revetments on both sides had caused the road to cave in every 50 metres.

The Comptroller and Auditor General (CAG) report in  2017 had adverse observations on border roads like; defective construction due unsuitable design/ specifications, steep gradient, defective alignment, turning problems for vehicles, improper contract management, poor riding conditions, inadequate drainage, delays, additional expenditure due to corrective action, plus non-completion and faulty specifications of works having serious bearing on operational capability of the Armed Forces. Also, surfacing of new roads gets skewed with just one winter and in many forward areas the inadequate width forces one way convoy system.

On June 24, 2021, Union Minister for Road Transport and Highways Nitin Gadkari while visiting Atal Tunnel said that of the 19 tunnels to be constructed in Himachal work on eight tunnels is in progress and work for balance 11 would be awarded soon. He said the BRO would also construct tunnels at Shinku La, Baralacha La, Tanglang La and Lachung La for better connectivity to border areas.This is good news. Shinku La tunnel at altitude over 9,800 feet will connect Himachal Pradesh with J&K, making the 475-km Manali-Keylong-Leh highway all weather. Tunnels at Baralacha La, Lachung La and Tanglang La will make the Manali-Leh direct route all weather beyond Atal Tunnel. But this is no easy task: Baralacha La (16,040 feet) requires a 13.2-km tunnel; Lachung La (16,800 ft) requires a 14.78 km tunnel, and; Tanglang La (17,480 feet) requires a 7.32 km long tunnel.If the Atal tunnel from the time of feasibility studies took 21 years for completion these additional four tunnels will not be available in a hurry.

Another news report of June 26, 2021 states that the Zoji La Tunnel project in J&K re-awarded for the third time is facing another hurdle. The project at Zoji La (11,580 feet) involves a 14.15-km tunnel and approach road 18.65-km, totaling the project length of 32.78-km. 14.15-km long bi-directional tunnel without egress/escape passage between Baltal and Minamarg. According to media, the National Highways and Infrastructure Development Corporation Limited (NHDCLY), subsidiary of the Ministry of Road Transport & Highways (MoRTH), tasked to execute the project has written to MoRTH to take the project back as it is finding it difficult to handle the challenging project citing the death of an executive director. NHIDCL has also imposed a penalty of Rs 10 crores on the company constructing the tunnel ‘Hyderabad-based Megha Engineering and Infrastructure Ltd (MEIL)’ and has placed it in the ‘negative list’ for inefficiency and non-compliance of contractual provisions of the project. The Zoji La Tunnel Project is required to be completed by September 2026.

The MoRTH no doubt would be taking corrective action for the Zoji La Tunnel project but for tunnels like at Baralacha La, Lachung La and Tanglang La it may be prudent to look at foreign‘Strategic Partnership’like in defence sector; not as original equipment manufacturer (OEM) but for tunnel expertise. We do not have the luxury of time given China’s attitude. MoRTH can even examine adding a strategic partner to speed up the Zoji La Tunnel project. Same goes for the 14 strategic rail lines to be constructed to serve deployments on borders with China and Pakistan – for which we need to match the construction speed of China. These have yet to take off beyond survey.