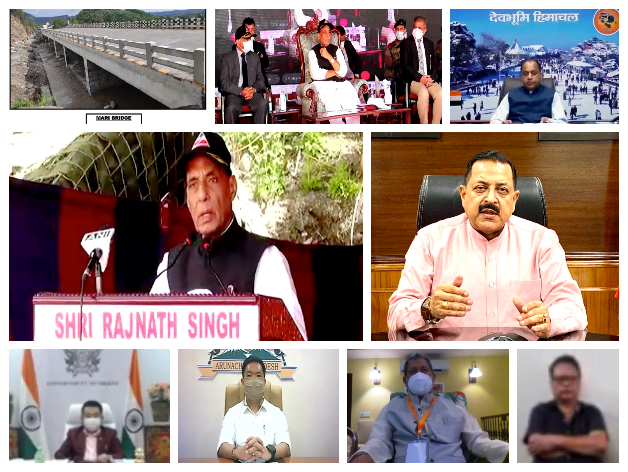 NEW DELHI: Defence Minister Rajnath Singh today inaugurated 63 road and bridge projects constructed by the Border Roads Organisation (BRO) in different regions, mostly in Northeast, Jammu & Kashmir and Ladakh.
Union Minister Dr Jitendra Singh, who also attended the ceremony, described these newly constructed bridges and roads as being of critical importance and said that all these projects inaugurated today addressed vital strategic and security concerns of the nation..
Chief Minister of Arunachal Pradesh Pema Khandu, Chief Minister of Sikkim Prem Singh Tamang, Chief Minister Uttarakhand Tirath Singh Rawat, Chief Minister of Himachal Pradesh Jai Ram Thakur, Lieutenant Governor Ladakh R K Mathur and Chief of Defence Staff (CDS) Bipin Rawat also attended the ceremony.
In his address, Rajnath Singh paid rich tributes to the brave jawans who laid down their lives in the service of the nation during the Galwan Valley incident in 2020, saying that the country will never forget their supreme sacrifice. He lauded the exemplary courage displayed by the Indian Army during the incident and stated that the nation is proud of its Armed Forces.
Rajnath Singh stated that India is a peace-loving nation that never resorts to any kind of aggression, but at the same time, it is always prepared to give a befitting reply if provoked. He reiterated the Government’s stand of resolving disputes through dialogue with neighbouring countries, but assured the nation that safety and security of the nation will not be compromised at any cost. He assured all possible support to the Armed Forces, reaffirming the vision of the Government, under the leadership of Prime Minister Shri Narendra Modi, of a strong military that is capable of dealing with every eventuality.
Dr Jitendra Singh later told the media that 63 roads and bridges inaugurated in the border States of Arunachal Pradesh, Sikkim, Nagaland, Uttarakhand, Himachal Pradesh and UTs of Jammu and Kashmir and Ladakh is not only strategically important, but it will go a long way in strengthening border infrastructure in remote and inhospitable areas.
Dr Jitendra Singh said that connectivity plays an important role in any country’s progress and development as it not only boosts trade and tourism, but also creates new employment opportunities through overall socio-economic development. Referring to Reasi-Arnas-Mahore (RAM) road, initially built as a Cl-V road in the year 1965 is upgraded by BRO to provide all weather connectivity on the road. He said, the Mari Nallah generates huge catchment area during monsoon and becomes an obstacle during peak monsoon season and lauded the BRO for completing Mari bridge work before onset of monsoons in one-year duration only, despite constraints of COVID pandemic.
Dr Jitendra Singh said, the construction of road Reasi-Arnas-Mahore will provide the much needed all weather connectivity to the Armed forces and will enhance their operational preparedness. He said, the numerous villages within the surroundings will be socially and economically connected to the main towns, leading to positive changes in social fabric of the area as a whole.
Dwelling on the strategic importance of the Reasi-Arnas-Mahore (RAM) road, Dr Jitendra Singh said, the link provides a major axis for Northern Command for switching over of its forces and the road is also the life line for the counter insurgent forces deployed South west of Pir Panjal Ranges.