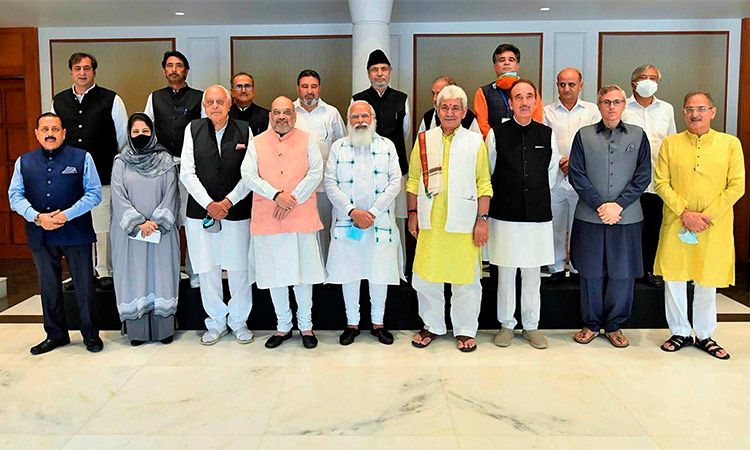 Members of various political parties from Jammu and Kashmir are photographed with Narendra Modi in New Delhi. Reuters

In a rare display of a conciliatory mood, Prime Minister Narendra Modi conferred last week with political leaders of Jammu and Kashmir.

Two years ago, in a precipitate action, taken without prior consultations with stakeholders, his government had stripped J and K of the special status it had under Article 370 of India’s Constitution, bifurcated it and reduced both the units to the level  of Centrally administered territories.

The Centre said at that time that statehood would be restored to J and K later and Assembly elections held, but did not say when.

Modi and his Bharatiya Janata Party assumed they had the mandate to make the changes as abrogation of Article 370 was mentioned in the party’s manifesto and it had won the election.

The people of Buddhist-majority Ladakh were presumably pleased with the region’s newly granted status of Union Territory. They had been demanding it for decades. Muslim-majority Kashmir resented the changes, which they considered spiteful.

Article370 which granted the state special status was the result of an agreement between the first Prime Minister, Jawaharlal Nehru, and Sheikh Mohammed Abdullah, who had led the movement against Maharaja’s rule in J and K.

Jammu’s Hindu majority probably reconciled themselves to the changes, which abridged rights and privileges they had enjoyed, believing it was a price they had to pay in the national interest.

The Abdullahs and Mehbooba Mufti were under detention and the state was under a lockdown and communication blackout while Parliament altered the state’s status.

Ms Mufti was the head of the state’s last elected government. The BJP was a junior partner of that government. Azad has been out of favour with the Nehru-Gandhi family since he joined a score of other party leaders in demanding an elected Congress President.

Last December, the Modi regime held elections to set up District Development Boards in J and K. It appeared to be an attempt to test the waters before scheduling the promised Assembly elections.

If parties which have influence in the Kashmir valley and were smarting under the high-handed measures of 2019, had boycotted the polls in protest, the BJP could possibly have gained control of most of the DDBs, if not all. But they decided to contest the elections.

Sinking their differences, they came together under the banner of People’s Alliance for Gupkar Declaration. The PAGD parties, who fought on the issue of restoration of Article 370, got control of all DDBs in Kashmir and some in Jammu too.

It was against this background that Modi decided on consultations with J and K leaders on the next steps. He may have also taken into account the strong criticism of the J and K changes by sections abroad.

President Donald Trump had posed no problems but some Congressional leaders were highly critical and some of them are influential in the new administration. On assumption of office, President Joe Biden signalled continuity of the Indo-US strategic partnership. But the bonhomie at the summit is missing.

By all accounts, the first face-to-face meeting between Modi and the J and K leaders after the state’s downgrading was quite cordial. Modi listened patiently as NC and PDP leaders demanded restoration of status quo ante.

Not surprisingly, no agreed conclusions emerged from the consultations. Also, there has been no word from the Prime Minister or his office so far on what the government plans to do next.

Howsoever conciliatory the Prime Minister may appear to be, his brand of politics rules out a total reversal of the 2019 charges, which is what NC and PDP want. But the government can go ahead with restoration of statehood and Assembly elections, steps to which it stands committed.

However, there is a problem there too. The government wants delimitation, election and statehood in that order.  Kashmir’s parties and people want restoration of statehood to be the first step. This is a legitimate demand. Refusal to concede it is sure to create doubts in Kashmiri minds about the government’s intentions.

Fresh delimitation of constituencies did not take place in J and K along with the rest of the country. This needs to be done before elections are held.

Jammu and Kashmir still has trying times ahead. Sunday’s drone attack on Jammu airport is a pointer in this direction.

The Centre must realise that peace and stability in the region can be best ensured by restoring a credible democratic process at the earliest.