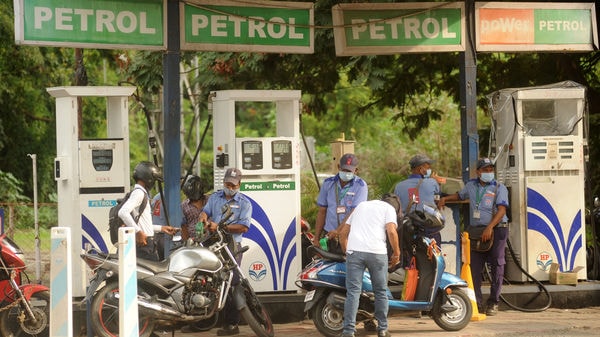 Petrol and diesel prices on June 28 was left unchanged by the oil marketing companies after two days of consecutive hikes. The fuel rate in Mumbai continues to be the highest among the metro cities.

(Also Read: Fuel price can be slashed by ₹4.50 a litre, claims a study)

In Mumbai, the fuel rates are ₹104.56 and ₹96.42 for a litre of petrol and diesel respectively. Petrol price in Delhi currently stands at ₹98.46 per litre while Diesel in the national capital is retailing at ₹88.90 per litre.

Rates of motor fuels have been increased 31 times so far since May 4. Petrol and diesel rates have surged ₹7.77 and ₹8.48 per litre since the prices started increasing.

Due to the incessant price hikes for both petrol and diesel in recent times, petrol price has crossed ₹100 mark in many places such as Rajasthan, Madhya Pradesh, Maharashtra, Andhra Pradesh, Telangana, Karnataka, Jammu and Kashmir, Odisha, Tamil Nadu, Ladakh, and some cities of Bihar and Punjab.

The high prices for petrol and diesel are attributed to the high rate of tax by the central and state governments. Besides that other components like freight charges, international crude oil price, dealer commission too impact the retail pricing.

There have been demands for tax reduction but the central government has denied any such possibility. The high rate of motor fuels is not only impacting the motorists but non-motorists as well. With the transportation costs increased, the rate of inflation is growing across India.