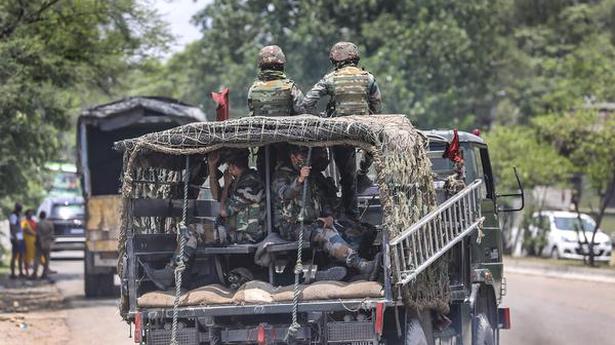 With no wreckage of any unmanned vehicle found at the technical airport of the Indian Air Force (IAF), Jammu Airforce Station, a National Security Guard (NSG) team joined the National Investigation Agency (NIA) on Monday to investigate even the possibility of the use of a long-distance launching pad to drive in drones with payloads of explosives.

Amid the development, the Army said two drones were spotted and fired upon at a military installation in Jammu on the midnight of June 27-28.

Official sources said the teams of the NSG and the NIA failed to find any debris of drones from the two blast spots at the IAF base. They were working on both the angles, the use of a local launch pad and a long-distance one to drive in drones. So far, no possible spot had been identified as a launch pad near the base, which is just 16 km away from the International Border.

It seems the drones may have managed to drop the payload and escape from the spot. Drones, which require an open field or a building top for achieving a flight, are frequency controlled and easily escape the traditional radar systems. They could cover up to 30-40 km of distance.

Police sources said a few persons working at the base were questioned but let off later.

So far, India has not blamed any country for the attack, which has left two IAF personnel injured.

Meanwhile, the Army has sighted and opened fire at two drones near a military installation in Jammu’s Kaluchak.

The movement of drones triggered a high alert.

The Army said, “Quick Reaction Teams engaged them with firing. Both the drones flew away. A major threat was averted by the alertness and proactive approach of the troops. The security forces are on high alert and a search operation is on.”

The security cover at the Srinagar and the Awantipora airports, which had witnessed militant attacks, were reviewed and recalibrated in the wake of the Sunday Jammu incident.

The growing suspicion of the use of drones in the attack have the security agencies on the tenterhooks in Kashmir, where ‘Fidyaeen’ (suicide) attacks are common. Drones are likely to pose a new challenge to the security forces manning hundreds of installations in the Valley.