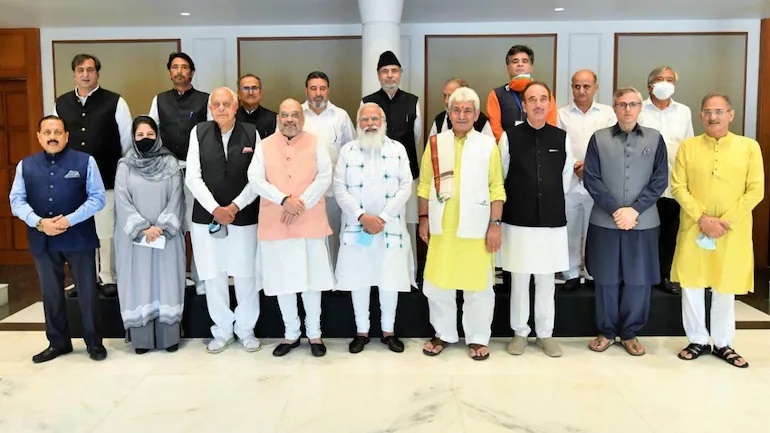 BY now, it seems that the stirrings of a political process in Jammu and Kashmir may have less to do with the latest version of the great game that is drawing to a chaotic climax in the region, or with the Biden administration’s gentle reminders about the need to restore normalcy in the truncated and downgraded state, and more to do with the BJP’s push to further its ideological and electoral projects in Kashmir and elsewhere in the country.

The June 24 meeting, by all accounts, was about getting the regional parties of J&K to endorse and participate in the delimitation exercise. The task of redrawing electoral boundaries is a fraught exercise anywhere in the democratic world. In J&K, it carries the additional burden of a communal divide between the two regions and a powerful national party that belongs to an ideological stream that wants to see a “Hindu” chief minister in the Muslim-majority former state.

The Jammu and Kashmir Reorganisation Act, 2019 provides for an increase in the number of assembly seats in the Union territory from 107 to 114. Jammu, which counted for 37 seats before the 2019 changes — 46 were in Kashmir, four in Ladakh, plus 20 symbolically reserved for PoK — may gain more constituencies through delimitation. There has been no delimitation in J&K since 1995. In the intervening years, as election after election has shown, including the District Development Council election in 2020, Jammu and Kashmir have become increasingly polarised into religiously identified regions.

When the Prime Minister invited the mainstream regional parties for talks, what stood out was the walk-back from his earlier stand that the parties were irrelevant to the “Naya Kashmir” that had been inaugurated in August 2019. It was an out-of-character move. Most observers of the Modi-Shah BJP agree that the party does not do U-turns. These tend to be perceived by both supporters and detractors as admissions of failure. From demonetisation in 2016 to the farm laws that triggered the still-ongoing farmers’ agitation, there have been no U-turns by this government.

That is why BJP camp followers, who had bought into the vitriolic rhetoric against the “Gupkar Gang”, are aghast that the party is doing business with the same politicians they thought had been cast into the dustbin of history. Those outside this circle of believers believe the walk-back signals the BJP’s Kashmir policy has hit a wall, and the government is looking for a way out against the larger backdrop of the turmoil in Afghanistan and a hostile neighbourhood.

But there had to be a compelling reason for the government to have made this U-turn. On the face of it, the external environment — in which Pakistan might be in the driving seat in Kabul through the proxy of the Taliban before the end of this year, the situation on the Line of Actual Control where the Chinese have adamantly stayed put, the spectre of a two-front war, therefore the need to strengthen the ceasefire on the Line of Control and begin a dialogue with Pakistan, as well as remove Kashmir from the agenda of US congressional hearings — does present a compelling package of national security reasons for the sudden decision to engage these political parties after two years of saying they don’t matter.

In the 1990s, the Narasimha Rao government withstood much stronger international pressures on Kashmir than the gentle rap on the knuckles that the US delivers now and then to the Modi government. Can Modi be seen to be doing deals with the Taliban or even Pakistan that would dilute the Sangh Parivar’s Mission Kashmir, that too months ahead of an important round of assembly elections?

However, this government has hardly tailored its ideological projects to the demands of diplomacy or global geopolitics. After all, it is the same government that walked out of the Regional Comprehensive Economic Partnership (RCEP), and was ready to throw away a carefully built relationship with Bangladesh for the communally polarising Citizenship Amendment Act (2019). Plus, it seems to carry the burden of demonstrating that it can take on international pressure better than its predecessors. In the 1990s, the Narasimha Rao government withstood much stronger international pressures on Kashmir than the gentle rap on the knuckles that the US delivers now and then to the Modi government. Can Modi be seen to be doing deals with the Taliban or even Pakistan that would dilute the Sangh Parivar’s Mission Kashmir, that too months ahead of an important round of assembly elections?

In any case, this government’s first-ever all-party meeting lacked both the substance and optics that would bring the reassurance of a “return to normalcy” that both Kashmiris and international interlocutors are looking for.

In any case, this government’s first-ever all-party meeting lacked both the substance and optics that would bring the reassurance of a “return to normalcy” that both Kashmiris and international interlocutors are looking for. Home Minister Amit Shah’s tweet, after the meeting, about strengthening the “democratic process” might have carried more conviction had it not been under his watch that the world’s biggest democracy imposed the longest internet ban on a section of its citizens, preventing both access to and dissemination of information, jailed thousands of Kashmiri politicians, and pre-empted all protest via blanket restrictions.

Rather, it was the emphasis on delimitation in J&K by the Prime Minister and Home Minister at the meeting with J&K political leaders that certainly suggested a focus narrower than the shifting sands of regional geopolitics, which demand grand gestures of reconciliation, people-friendly confidence-building measures, and big promises. There were none of those in the meeting, and there is no indication that such gestures are in the pipeline. There was no timeline to the assurance on the restoration of statehood, a reiteration of a commitment made by the Home Minister in Parliament.

What the government made clear was the chronology. Elections and statehood may follow delimitation. The J&K leaders, who wanted statehood restored first, did not agree with this sequencing, but Prime Minister Modi tweeted that “delimitation has to happen at a quick pace so that polls can happen and J&K gets an elected government that gives strength to J&K’s development trajectory”. Shah tweeted that “the delimitation exercise and peaceful elections are important milestones in restoring statehood as promised in Parliament”.

The renewed attention to J&K, and the emphasis on a process that is likely to create more bad blood, more polarisation along Hindu-Muslim lines, more suspicion in the Valley, could carry a wider resonance in the run-up to a string of assembly elections. Indeed, the compelling reason for a big move by the government could be a result of its single-minded focus at this point — how to ensure a BJP victory in the upcoming elections in crucial states, vital to its prospects for a third term in 2024.

If at all there is a message for Pakistan or the international community in this new phase of engagement with J&K’s political leadership, it is the limits of what can be reversed to the pre-August 5, 2019 position. This is the government’s roadmap towards “normalisation”. It is for the hybrid military-civilian regime now to decide how to re-engage with India within this framework.