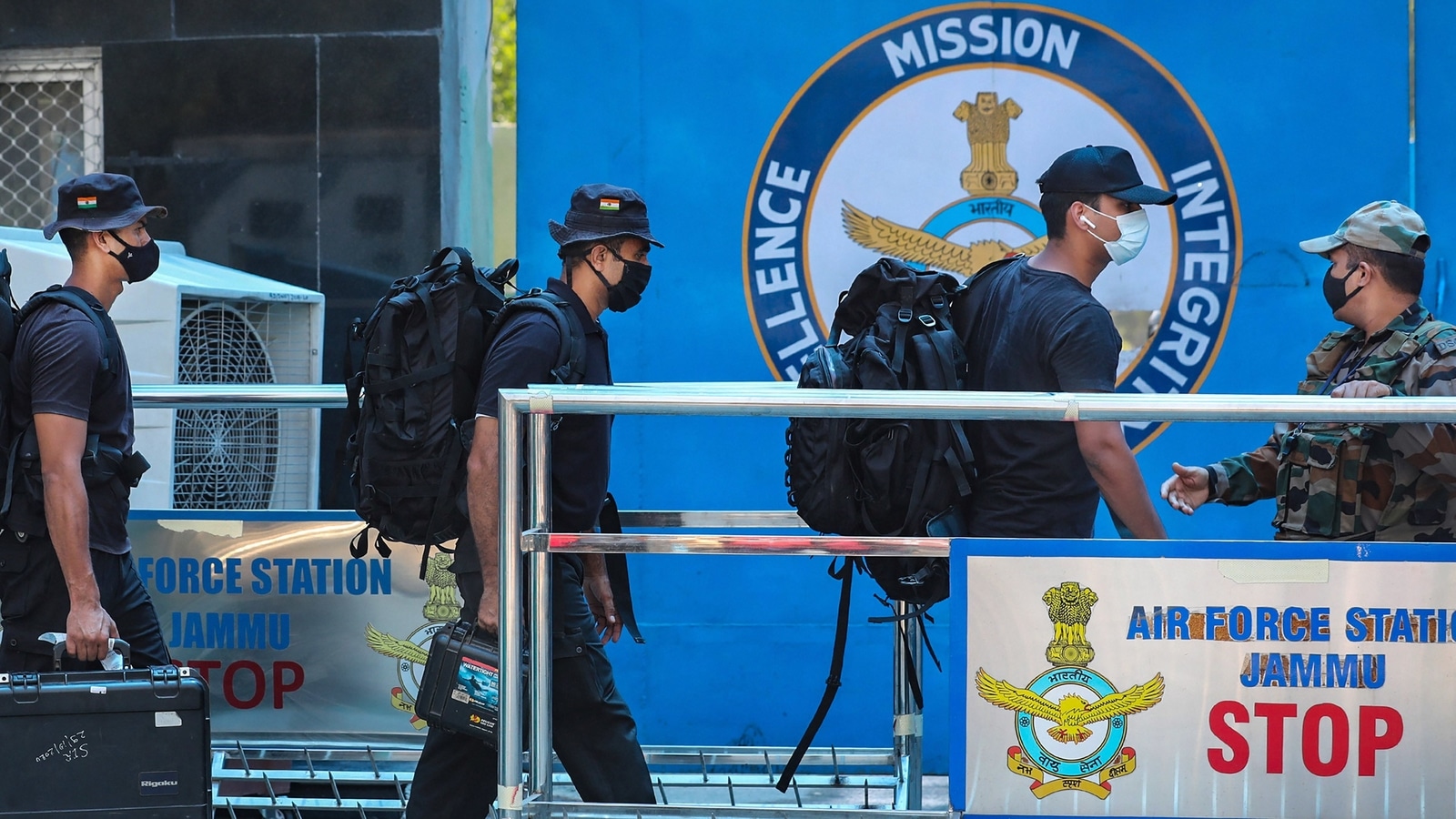 Initial investigations conducted by security agencies and the Jammu & Kashmir Police have revealed the role of Pakistan-based Lashkar-e-Taiba (LeT) in the drone strike at a Jammu air force station early on Sunday.

The drone attack is linked with the recovery of a 6kg improvised explosive device (IED) by the Jammu police from an operative of LeT, leading to the detention of at least three terror suspects by the J&K Police, people aware of the matter said.

While the security agencies and J&K Police are tight-lipped about the drone attack, the people quoted above indicated the Pakistan-based terror group planned to target the air traffic control (ATC) tower at the facility with one drone and the other was aiming at either a parked Indian Air Force (IAF) helicopter or the radar.

“The two IEDs weighing around 5-6kg with RDX as the main explosive charge were dropped at a distance of 50 yards from each other. One charge was some 40 yards from the ATC, while the other was around the same distance from the parked helicopter. The drop was made through a latitude-longitude device and that they missed the targets could be due to faulty execution or high wind factor,” a senior security official said on condition of anonymity.

According to security agencies and the police, the drones flew from across the border, 14.5km away from the Jammu airport, and returned after the hit. They were suspected to have been flying at a height of 1.2km and would have been powered by long-range batteries.

There has been a rise in drone activity in the region, with security experts saying that Pakistan-based terrorists were using the devices to drop arms, ammunition, drugs and money in Jammu & Kashmir to fuel terrorism. Forensic analysis of a drone shot down by the army in the Hiranagar sector last year showed that it was a locally assembled hexacopter. The components used were readily available in hobby shops, the analysis, carried out by the Delhi-based Drone Federation of India (DFI), said.

The flight controller of the 24kg drone was CubeBlack, manufactured in Hong Kong. It also said that no planned mission was set in the drone and it was manually controlled using a ground control system. The analysis showed that the drone operator disabled all modes of data extraction. DFI indicated that the estimated radius for take-off was 10km, beyond visual line of sight.

It was estimated to have been in the air for 35 minutes, said DFI, adding that the maximum possible range was 30km.

The latest drone strike has raised a red flag in the Jammu sector for 14 drone sorties have been made by Pakistani terror groups, a majority of them by LeT and two by Jaish-e-Mohammed. “Our estimate is that six sorties with weapon payloads were made in Samba sector, three to four in Hiranagar sector, two in Nowshera-Rajouri sector, and another two in Arnia sector. We have found that the drones are assembled with different Chinese parts used of different makes for deniability. The dropped weapons were meant for Lashkar and Jaish operatives in the Valley with the specific design to disturb peace in Kashmir,” said a top security official.

While the Indian security forces have been testing an anti-drone jammer technology at the border with Pakistan, the communications between Indian agencies getting jammed in the process has proven to be a collateral damage, the official said. However, in the era of swarm drones, the Indian security forces are alive to the new threat posed by Pakistani terror groups and are expected to take counter-measures, he added.