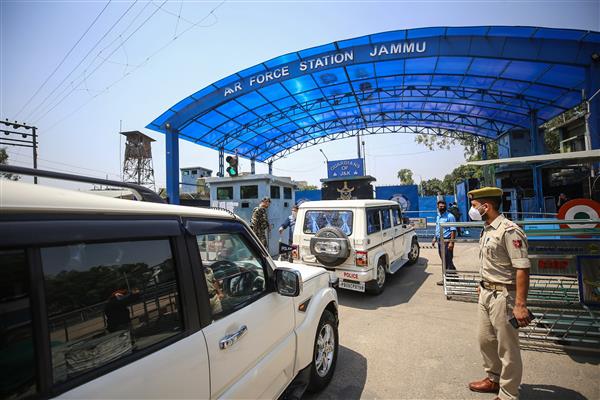 Intelligence and investigative agencies on Monday said that the preliminary findings in the investigation into the drone attack at the Indian Air Force (IAF) station in Jammu on Sunday indicated the role of the Lashkar-e-Toiba (LeT) terror group and use of highly sophisticated explosive RDX, which also points at likely involvement of Pakistan’s state actor in the blast.

New face of terror: Drone attack on Air Force base in Jammu; 2 injured

Sources in the agencies said, the two bombs weighing a little over 2 kg each, were dropped from a height of around 100-150 meters and were activated by ‘impact charge’. The attack appeared to be closely linked with the recovery of a 6 kilogram IED by the Jammu Police from an LeT operative leading to detention of at least three terror suspects, they added.

The sources said the agencies are also not ruling out the possibility of the drones having originated from Indian side of the border, but they claimed that these might have been activated by terrorists infiltrated from Pakistan with the requisite training.

Meanwhile, officials in the security agencies said, over 300 drones and unidentified flying objects have been sighted along the country’s western frontiers with Pakistan, particularly in Punjab and Jammu sectors. They said personnel posted in forward areas are grappling to find a suitable technology to check these lethal sky-floating objects.

The officials said the security agencies have also been testing some indigenously-built counter-drone technologies in the rough jungle terrains, desert and marshes along the borders with Pakistan, but till date a very little success has been achieved.

Thus, the officials said, in the present situation the lead agencies — Border Security Force (BSF) and frontier units of states’ police — have adopted a standard operating procedure (SOP) of “sight and blight” in case a drone or a remotely operated aerial vehicle is spotted.

Data prepared and shared by the security agencies with the government said over 300 “definite sightings” were made by the BSF and other police units after August 5, 2019, when Jammu and Kashmir’s special status under Article 370 was withdrawn and it was reorganised into the two Union Territories (UTs) of Jammu-Kashmir and Ladakh.