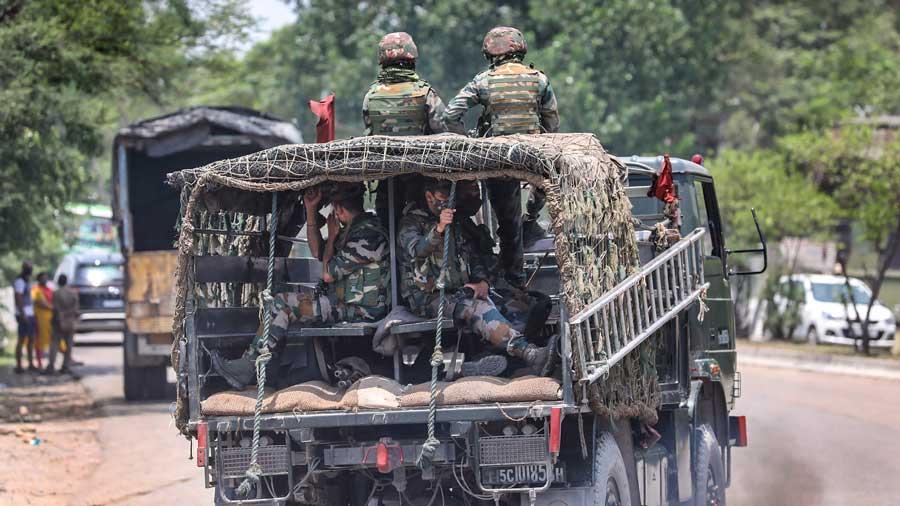 A fresh attempt to target a military installation here with drones was foiled by alert soldiers even as a preliminary probe into the attack by two unmanned aerial vehicles on the nearby IAF station by terrorists hours earlier on Sunday indicated the possible use of a cocktail of chemicals including RDX in the first of its kind incident in the country.

Investigators were yet to determine the flight path of the drones that dropped two bombs at the Indian Air Force(IAF) station in the early hours of Sunday, causing minor injuries to two IAF personnel, sources said on Monday, as they scanned the CCTV footage, including from cameras installed on the boundary walls of the airport. However, all the CCTV cameras focused on the roadside, the sources added.

Officials said the drones that dropped the explosive material at the technical area of Jammu airport in the outskirts of the city were either flown back across the border or to some other destination during the night. The aerial distance from the Jammu airport to the international border is 14 km.

The IAF attack is the first instance of suspected Pakistan-based terrorists deploying drones to strike at the country’s vital installations.

Punjab Director General of Police Dinkar Gupta also held a meeting with senior officials of Border Security Force (BSF) and the state police to chalk out a strategy to deal with the national security challenges posed by drones.

According to central security agencies, over 300 drones and unidentified flying objects have been sighted along the sensitive border with Pakistan post the August 5, 2019 abrogation of Article 370 that granted special status to Jammu and Kashmir, even as they grappled to find a suitable technology to check these lethal sky-floaters.

Army sentries at the Ratnuchak-Kaluchak military station in Jammu fired at the two drones that later disappeared, an incident that came hours after the nearby IAF station witnessed the first terror attack using quadcopters.

The first drone was spotted at around 11.45 pm on Sunday followed by another at 2.40 am the next day over the military station, which was targeted by terrorists in 2002 in which 31 people were killed including 10 children.

Officials said on Monday that alert Army troops fired nearly two dozen rounds in a bid to bring down the drones hovering over the Brigade headquarters of the military station.

“Both the drones flew away. A major threat was thwarted by the alertness and proactive approach of troops,” he said, adding the security forces are on high alert and the search operation is in progress.

The officials said the whole area outside the military station was cordoned off immediately and a massive search operation was going on when last reports were received.

Nothing objectionable has been found on the ground so far, the officials said.

The military station at Kaluchak has been on high alert ever since the 2002 terror attack. Military personnel, family members of Army men and civilians were among the 31 killed in the deadly attack. Forty-eight people were also injured.

A day afer the attack, the IAF station continued to remain out of bounds for all but the probe teams including one from the National Investigation Agency(NIA), which picked up every bit of evidence available on the ground.

Officials said the explosive material dropped by the drones might have been manufactured using a cocktail of chemicals including RDX but a final confirmation was still awaited.

They said an NSG post-blast analysis team has been sent to the IAF station to examine the material. This team will share its findings with the Jammu and Kashmir police and the NIA after completing the task.

The explosions took place around 1.40 am on Sunday within six minutes of each other. The first blast ripped off the roof of a single-storey building at the technical area of the airport manned by the IAF in Satwari area on the outskirts of the city. The second one was on the ground.

The investigations are going on but the teams are still clueless about the path taken by the drones before dropping the bombs, sources said.

Various probe agencies and senior officers of the army, police and other security agencies visited the IAF station for the second day on Monday, while the Army’s Quick Reaction Teams were seen patrolling the areas outside the base at regular intervals.

J&K Director General of Police Dilbag Singh has termed the incident a “terror act” and said the police and other agencies were working with the IAF officials to unravel the plan behind the attack.

Vehicular movement recorded around the site of the attack at the time when the drones dropped the explosive material was also being scrutinised minutely, officials said.

The Jammu and Kashmir Police has registered an FIR under the Unlawful Activities (Prevention) Act, officials said, indicating that the case is likely to be taken over by the NIA.

A Border Security Force(BSF) official said Indian habitations and important bases all along the Pakistan border are the most vulnerable when it comes to attacks by a single or a swarm of drones.

This is because, the official said, infiltration has become very tough due to the effective domination by security forces in anticipation of the terrorist designs post August, 2019, regular unearthing and plugging of the under-ground tunnels and a ceasefire recently agreed upon by the two neighbouring countries.

In October 2019, the Union Civil Aviation ministry had issued a policy document primarily to deal with possible security challenges from rogue drones to key installations like nuclear power plants and military bases.

Titled ‘National Counter Rogue Drones Guidelines’, the document said it was a matter of concern that small drones were proliferating at a rate that has alarmed battlefield commanders and planners alike.

“The utilisation of armed drones by extremist groups to carry out reconnaissance and targeting strategic Israeli installations during Israel-Lebanon war is an example of escalation of terrorist and insurgent drone capabilities,” according to the document.