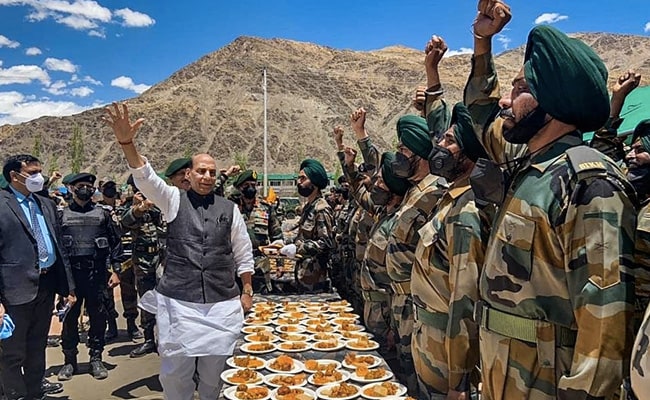 Asserting that the Indian army has the capability to give a befitting reply to every challenge, Defence Minister Rajnath Singh on Monday said efforts should be made to find solution to issues through dialogue with neighbouring countries.

He further said, “Will not tolerate if someone dare to threaten us” as he carried out a comprehensive review of India’s military preparedness in eastern Ladakh.

While interacting with the soldiers in Ladakh, Mr Singh said that the Indian army has the capability to give a befitting reply to every challenge.

Suggesting that the resolution of disputes can be found through dialogue, Mr Singh also said, “Efforts should be made to find a solution through dialogue with the neighbouring countries. The intention should be clear. We neither want to challenge anyone, nor will tolerate anybody’s wrong-doings. But when needed, our army has the capability to give a befitting reply to every challenge.”

The defence minister on Monday asked why India and its neighbours cannot resolve the disputes permanently through talks with a clear intention. Mr Singh, who is currently in Leh as part of a three-day visit to Ladakh, said this while inaugurating 63 infra projects constructed by Border Roads Organisation (BRO).

“We were neighbours, we are neighbours and will remain neighbours. Can’t we find a permanent solution on the disputes by talks? Only thing is that there should be a clear intention,” said Mr Singh.

He also said that India is a believer of “Vasudev Kutumbakam” (which means the ‘world is one family’) and if the country picks up the weapon, it is for the world and never has the intention to encroach anyone’s land.

While remembering the soldiers who died during the Galwan clash with China, the defence minister reiterated that the country will never forget the sacrifice of the “Galwan bravehearts”.

“I salute the memories of all those soldiers who sacrificed their lives for the country in “Galwan Valley” in June 2020. I also want to say that this country will never forget the sacrifice,” he said.

While addressing the troops at Karu Military station, Mr Singh further said, “I am told that the third division of the 14th Corps was established in 1962 during the India-China war. Within a few years of its establishment, you played a decisive role in the India-Pakistani War of 1965. Your heroic stories raised the heads of countrymen in Kargil war too.”

Emphasising that the third division of the 14th Corps is also known as Trishul division, as, “Today you are protecting the northern borders of the country by being fierce like Lord Shankar’s trident and I am sure that you are capable of facing any situation arising on the border,” he added.

Mr Singh highlighted that India is represented as the advocate of world peace and if forced, it will also pick weapons to establish peace.

“Till date, India has neither attacked any country, nor have we captured an inch of land of any country,” he added.

India and China have been engaged in a military standoff at multiple friction points in eastern Ladakh since early May last year. However, the two sides completed withdrawal of troops and weapons from the north and south banks of Pangong lake in February following a series of military and diplomatic talks.