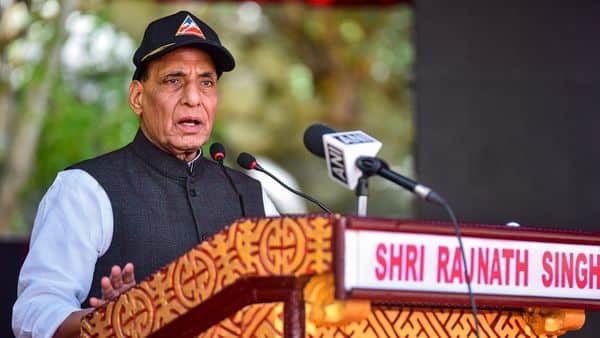 Defence Minister Rajnath Singh on Monday said India is a peace-loving nation that never resorts to any kind of aggression but is always prepared to give a befitting reply if provoked or threatened, in what is seen as a message to northern neighbour China.

Addressing soldiers on the second day of his visit to Ladakh, the minister said India wants to resolve disputes with the neighbouring countries through dialogue but added that country’ security would not be compromised.

The twin comments come against the backdrop of tensions between India and China that have been on a high since May last year when India detected Chinese troops inside its territory in eastern Ladakh. The strained ties were tested further when a clash between Indian and Chinese troops in Galwan area of eastern Ladakh resulted in the deaths of 20 Indian and an unknown number of Chinese soldiers last June. It was the first deadly clash between the two sides in more than four decades. Talks at the military and diplomatic levels since then have resulted in disengagement at one of many friction points in eastern Ladakh but tensions continue to simmer in the other areas given that large numbers of troops of both countries are standing eye ball to eye ball.

In his remarks, Singh also paid tributes to the 20 Indian soldiers killed in the Galwan.

The defence minister said disputes can be resolved through dialogue if there is a clear intent for it.

“We have always worked for world peace. We never attack anyone. Our objective has never been to achieve victory against anyone. India has neither attacked any country nor occupied an inch. Our intention is very clear,” he said.

Singh said India never resorted to any kind of aggression, but it was always prepared to give a befitting reply if provoked.

Earlier in the day, the minister dedicated to the nation 63 bridges built by Border Roads Organisation (BRO).

On Sunday, Singh reviewed India’s military preparedness in the region. Indian Army chief Manoj Mukund Naravane and other military commanders gave Singh a briefing on the prevailing situation as well as India’s combat readiness in the region at the Leh-based headquarters of the 14 Corps, officials said.

According to military officials, each side currently has around 50,000 to 60,000 troops along the Line of Actual Control.