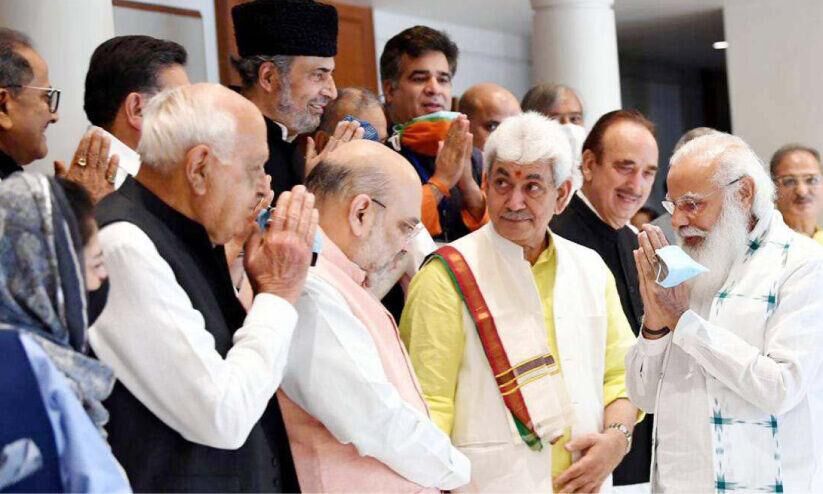 The Prime Minister said delimitation has to happen at a quick pace so that polls can happen and J&K gets an elected government that gives strength to J&K’s development trajectory.

The common refrain in Kashmir about the “surprise meeting” was that this was done purely under international pressure on the Modi government and changing geopolitics.

In the meeting, Kashmir leaders came up with various suggestions. Former chief minister Omar Abdullah said that Congress leader Gulam Nabi Azad, who spoke in the end, like others, sought statehood first elections later. Omar said that even the Prime Minister said bureaucratic government is not good and makes mistakes. NC also sought reversal of decisions including that of turning J&K into union territory, and described delimitation as a suspect exercise.

Muzaffar Baig of Peoples Conference said he asked for article 371 with 35A provision in it till article 370 is decided by the court. Mehbooba Mufti said she said revocation of 370 was morally, legally and constitutionally wrong, and insists on talking to Pakistan, asked for release of detainees, and said she will fight for restoration of article 370.

For the Centre, it is evident that Article 370 is a passé.

Jammu and Kashmir is heading towards a new normal. Restoring statehood to Jammu and Kashmir is a promise made on the floor of the Parliament. But no time-frame has been given. It can be today, tomorrow, or not in near future. National Conference, People’s Conference, and other parties have challenged the Centre’s decision to scrap Article 370 in the Supreme Court. The matter is sub judice.

Power is a gluing factor that binds people and parties. After losing power, PDP disintegrated like a pack of cards. Every big leader, who was swearing by PDP ideology and late Mufti Mohammad Sayeed’s vision, jumped ship for greener pastures. People’s Conference led by Sajad Lone, which was all bluster when it joined PAGD, parted ways soon after District Development Council polls.

Soon after Article 370 was revoked on August 5, 2019, two MPs – Justice (retd) Hasnain Masoodi and Mohammad Akbar Lone – refused to resign from parliament. It was felt that since their leaders Farooq Abdullah and his son Omar Abdullah are in jail and they could not take this decision. Soon after Farooq was released, the first thing he did was to rush to New Delhi to attend the parliament.

PDP is beset with internal problems. Mehbooba’s close aide Waheed Para is in jail. Her maternal uncle Sartaj Madni signed a bond to earn freedom. Her brother Mufti Tasaduq who was parachuted on Kashmir and made tourism minister has vanished into thin air after PDP lost power. She is almost left alone. She does not want to risk the party anymore.

The other three political parties in the People’s Alliance for Gupkar Declaration (PAGD) do not have a postal address. So why risk the future?

Delimitation is a priority for the Centre, not the statehood. Why should the Centre give away hard-earned success? Under the Reorganization Act, 2019, the Union Territory of J&K will have an Assembly while Ladakh will not. Under the Act, the number of seats in the J&K Assembly would be increased from 107 to 114 after delimitation.