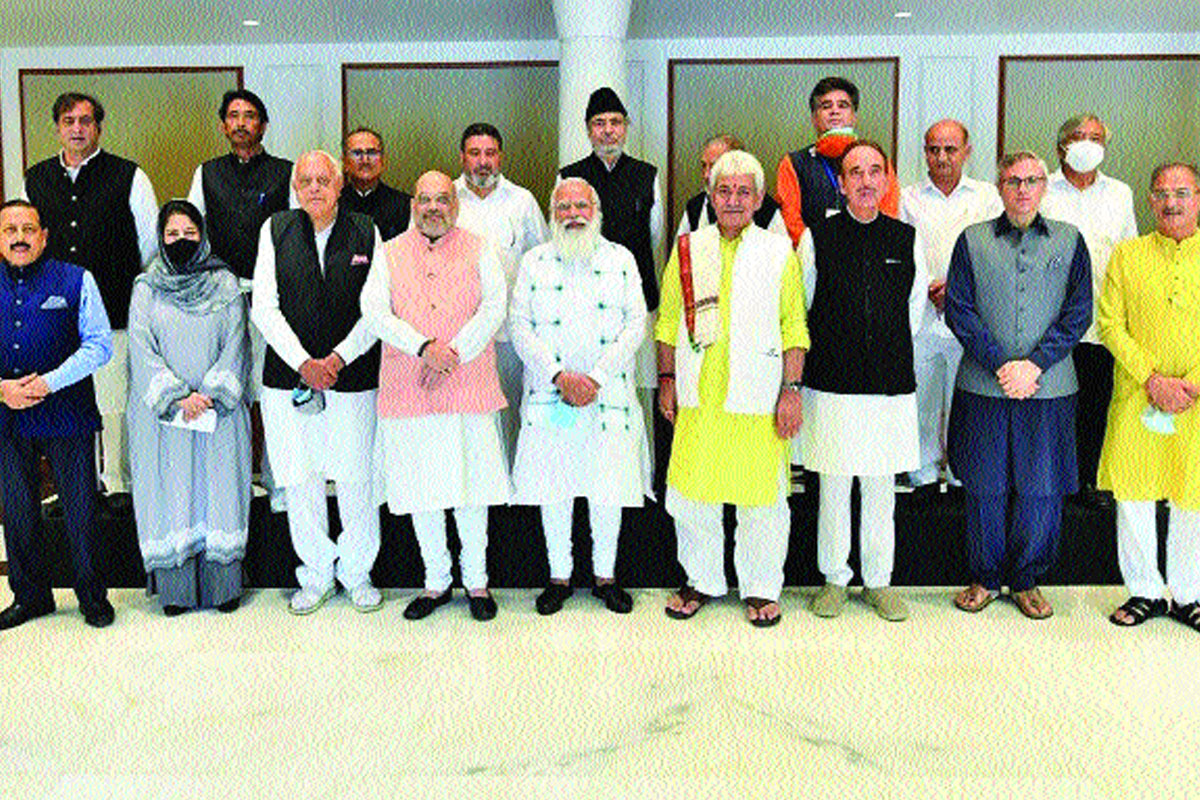 Last week, Prime Minister Narendra Modi met a group of politicians from Jammu and Kashmir seeking to break what he termed, ‘dil se doori, dilli se doori.’ The group included former chief ministers, deputy chief ministers and representatives of major political parties. There was free and frank discussion on multiple issues concerning the erstwhile state during the three-and-a-half hour meeting. It was Mr. Modi’s first interaction with political leaders of J & K after abrogation of Article 370. A number of delegates shared their concerns with the PM.

Major takeaways from the meeting included speedy culmination of the delimitation exercise followed by elections, though no time limit was set. The PM tweeted, “Our priority is to strengthen grassroots democracy in J&K. Delimitation has to happen at a quick pace so that polls can happen, and J&K gets an elected government that gives strength to J&K’s development trajectory.” The participants were briefed on various projects undertaken in the region and the prevailing security environment. The message given to political entities was that restoration of democracy is a priority, but for that to happen delimitation is a must. Objections to delimitation must end.

As per Ghulam Nabi Azad, the participants placed five demands before the PM, including grant of statehood, conducting assembly elections to restore democracy, rehabilitation of Kashmiri Pandits, release of all political detainees and on domicile rules. Mehbooba Mufti’s suggestion for dialogue with Pakistan was turned down. Restoration of Article 370 was largely not discussed.

This conference conveyed multiple intents of the government. Firstly, restoration of democratic processes is a priority. The delimitation exercise, which many Kashmiri politicians felt was unnecessary, is a pre-requisite and unless all participate in the process, there would be no forward movement. This is Delhi’s redline and all parties must adhere to it. Hence, conducting elections is dependent on cooperation by with the delimitation commission.

Secondly, it proved that Pakistan’s political leadership continues to spread lies and half-truths, based on poor intelligence inputs. SM Qureshi, Pakistan’s foreign minister, had written a letter to the UN Secretary General a fortnight ago, claiming India was likely to push additional divisions in the valley, as also push demographic changes. This was based on media reports of central police forces returning after having conducted poll duties. The meeting conveyed the reverse and reinforced the immaturity of Qureshi, who hastily sent an official communique, based on half-baked intelligence inputs.

Responding to the conference in Delhi, Qureshi stated in a press interaction, “Yesterday’s meeting achieved nothing. In my view it was a drama that can at the best be called as a public relations exercise that yielded nothing.” He termed the attendees as pro-India political leaders. When these political leaders, particularly Farooq Abdullah and Mehbooba Mufti raise dialogue with Pakistan, they are praised as being forward looking, now since they were silent on Article 370, they were termed pro-India. Mehbooba was the only politician to demand talks with Pakistan, which was shot down.

What further upset Pakistan was that there were no protests or calls within the valley demanding restoration of Article 370.

The third message was that there would be no roll back of Article 370. Neither did participant insist on it, nor was it discussed; however, the position of the government was clearly spelt out. The logic for ignoring it was that it remains sub-judice. Omar Abdullah stated, “It will be foolish to expect article 370 will be back – there has been no indication it will be restored by the current government.” Grant of statehood would be considered after successful conduct of assembly elections, the onus of which lies on political parties.

Accepting finality on Article 370 by valley politicians further hurt Pakistan’s ego. Their political leadership had been harping on its restoration as a pre-requisite for commencement of dialogue. The Indian foreign office never commented on these statements, casually mentioning that it was India’s internal matter. The current ceasefire is the result of talks between the Indian government and the Pakistani army and has held for over 100 days.

The home minister’s comment that statehood would be considered post elections backed General Bajwa’s demands on Pakistan’s pre-conditions for talks. General Bajwa had stated to a group of select journalists that restoration of statehood and no demographic change are essential for furtherance of talks, while adding that Article 370 is valueless. The tussle within Pakistan, on what should be insisted upon, Article 370 or restoration of statehood, will continue. This is for Pakistan to resolve, while India will watch from the side lines.

Finally, the meeting sent an important message that the Hurriyat, which Pakistan had funded over the years, is now a spent force. The Hurriyat, based on money power flowing through the hawala route, had taken control over levels of violence in the valley, while its members simultaneously built their private financial empires and settled their children away from trouble spots. They held successive governments to ransom and displayed a larger-than-life image, claiming themselves as representatives of the people.

The current government broke this myth, reinitiated pending cases against its leader and effectively shut down its base. Currently, the Hurriyat is incapable of playing any disruptive role in valley politics. They neither demanded to attend, nor was their attendance sought by other attendees, indicating that no political party trusted the Hurriyat. Its irrelevance is a boon for the region.

The government gained confidence after successfully conducting DDC elections and witnessing declining terrorism in the valley. The ceasefire with Pakistan reduced infiltration, resulting in relative peace. The intention of security forces has shifted to preventing youth from joining terrorist ranks and surrendering, rather than eliminating them in encounters. Tourism has returned to the valley. Kashmir is witnessing calm, and this hurts those who strived on violence and turmoil, including Pakistan. The Valley’s political parties have been given a choice, adhere to the government’s roadmap and redlines, or Central rule would continue.

The writer is a retired Major-General of the Indian Army.