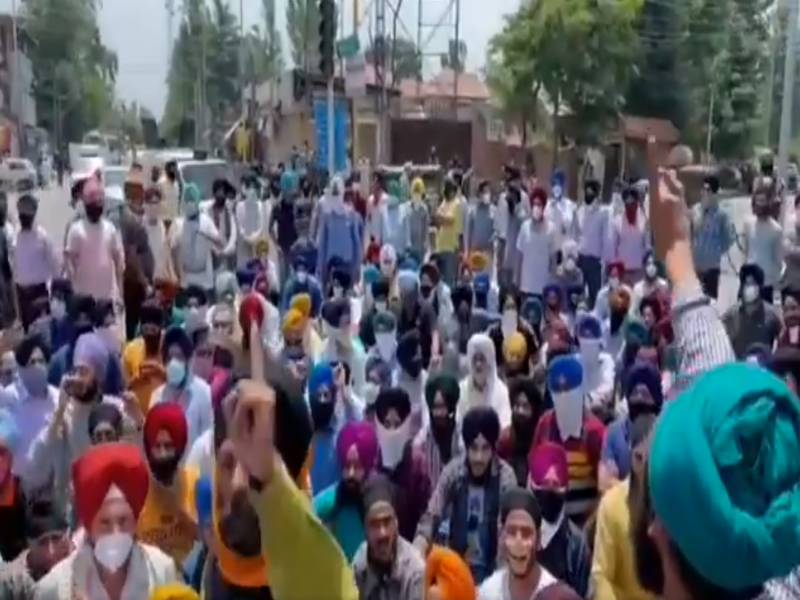 Srinagar/IBNS: The alleged abduction and forced conversion of two Sikh girls in Jammu and Kashmir, followed by their marriage to the men of another community, has triggered a massive uproar, with Sikh groups staging protests in the Union Territory and the national capital Delhi.

Shiromani Akali Dal (SAD) leader Manjinder Singh Sirsa made the allegations of the alleged ‘abduction and forcible conversion’  on Sunday and led a protest by the Sikh community, demanding safe return of the girls and an anti-conversion law in the UnionTerritory, in line with those in Uttar Pradesh and Madhya Pradesh.

“Two Sikh girls kidnapped at gunpoint and forcibly converted and wedded to elderly men of a different religion. Appeal to Centre to take action,” ANI quoted SAD leader Sirsa as saying in Srinagar on Sunday.

He led a protest against the alleged forced conversion & wedding of Sikh girls in Kashmir. pic.twitter.com/vm5Z0hw330

“Thanking LG, Jammu Kashmir Manoj Sinha Ji for immediately issuing directions with respect to the issue of forced Nikah of Sikh daughters in Srinagar. He has assured us that the Sikh girl who was forcibly converted would be returned back to her family. He addressed our concerns related to the safety of Sikh girls in the valley and this harmful trend of religious conversion,” Sirsa was quoted as saying after the meeting.

“We also expressed the demand of having an anti-conversion law which would mandate parents’ permission. We also handed him the letter of Giani Harpreet Singh Ji, Jathedar, Sri Akal Takht Sahib,” Sirsa added.

On Monday, Home Minister Amit Shah assured the safe return of the abducted Sikh girls in Jammu and Kashmir to their families, following the appeals of the Sikh groups.

“Home Minister Amit Shah as a assured us about the safety of minority Sikh girls in the valley and that the girls would be soon returned to their families. He has given time to meet Jammu and Kashmir Sikh delegation soon to discuss the minority’s concerns,” Sirsa told a press conference,  quoted as saying by news agency ANI.

“Home Minister Amit Shah told us that he has been in touch with the Jammu and Kashmir Governor since yesterday and monitoring the entire situation. He has assured us that stringent action will be taken. Nobody will be spared. Our Sikh delegation will meet him in Delhi,” he added.

•@AmitShah Ji has assured us about the safety of minority Sikh girls in the valley & that the girls would be soon returned to their families. He has given time to meet Jammu& Kashmir Sikh delegation soon to discuss the ground issues and address the minority’s concerns@ANI https://t.co/zlf9pwVoSK pic.twitter.com/GqSFUDYqBA