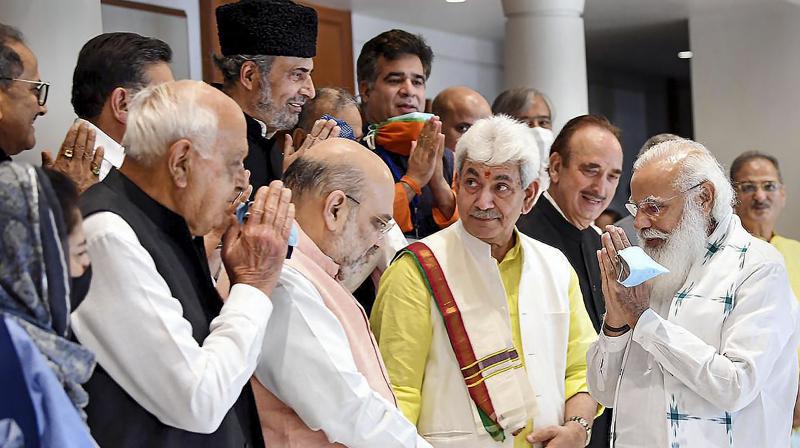 Our democracy’s biggest strength, Prime Minister Narendra Modi tweeted hours after his meeting with 14 senior political leaders from Jammu and Kashmir on Thursday, “is the ability to sit across a table and exchange views”. Regrettably, that thought had not occurred to the leadership of the BJP when they chose to boycott the three all-party roundtables on Kashmir that Prime Minister Manmohan Singh had convened during 2006-07. The need to sit across a table and exchange views had also not been felt when the Union government took momentous decisions with respect to Kashmir in August 2019.

Far too much pain has been inflicted on the Kashmiri people over these past two years before the dawning of this new wisdom that both “Dilli ki doori” and “Dil ki doori” have to be bridged. While a total of 14 leaders attended Mr Modi’s meeting last week, close to 30 had attended Dr Singh’s roundtables. The 2006-07 process reached out to a wider cross-section of Kashmiri public opinion than last week’s meeting which was dominated by what Prime Minister Modi and Union home minister Amit Shah have pejoratively dubbed the “Gupkar gang”. The Abdullah and Mufti families and the likes of Ghulam Nabi Azad have been discredited by decades of misgovernance. It remains to be seen if the new process restores public faith in the electoral process given that it is being initiated with their imprimatur.

In his opening remarks at the 2006 meeting Dr Singh had called the roundtable “a dialogue of equals” that would achieve historical importance provided “we are able to unleash a process by which we can arrive at a workable blueprint that can help create a new chapter in Kashmir’s history. Not by compromising on one’s ideals, but in a spirit of mutual tolerance, understanding and accommodation”. That sentiment did not come through clearly in Mr Modi’s recent initiative.

An important difference between the 2006-07 meetings and last week’s is that Article 370 of the Constitution, granting a special status to the erstwhile state of J&K, stands repealed and J&K reduced to the status of a Union territory, minus Ladakh.

The repeal of Article 370 was in accordance with the BJP’s long-standing electoral commitment and has since become a non-issue. While many non-BJP parties did not support that decision in August 2019, most have reconciled to the change.

The question of J&K’s statehood remains on the table and none less than the Union home minister, Amit Shah, gave an assurance to Parliament that statehood would be restored at some point. A new round of elections to local bodies and a UT government will not, however, address the real challenge facing New Delhi in J&K. Neither the repeal of Article 370 nor the question of statehood are really at the centre of what may be called the Kashmir conundrum. The core issue remains the status of Kashmir and the equation with Pakistan.

Even if Kashmir is denied its own flag and nomenclature for the head of the government, some elements of its special status will have to be preserved. In theory this is not a problem since there are other border states with special status.

Continental nations with far-flung regions have to extend some form of special status to border areas in the interests of national unity and integrity. India is still a 70-year-old republic and extending benefits to certain regions to facilitate their fuller integration is not a big price to pay.

The question remains if New Delhi is any closer to a resolution of the Kashmir conundrum as a result of all the steps taken by the Modi-Shah team or whether the delimitation exercise and election process that is to follow will continue to feed dissension in the Kashmir Valley. Over the past three decades state Assembly elections and delimitation exercises have been held several times and their validity internationally endorsed.

This new round of delimitation must inspire the confidence of all if the elections following it have to acquire legitimacy. Even after all that the Kashmir problem would not have been resolved if all stakeholders are not party to the final solution.

Dr Manmohan Singh and Gen. Pervez Musharraf worked towards a final solution that the BJP has repeatedly rejected. Yet, given its U-turn on so many issues, it remains to be seen if on this issue too the BJP will take a different view in future if the current process does not yield results. Dr Manmohan Singh summed up his approach pithily when he said that “borders can’t be changed but can be made irrelevant”; if there was trust between India and Pakistan and the assurance of peace and security.

Dr Singh and Gen. Musharraf came to an understanding on resolving the

Kashmir issue but the matter was never clinched. Early resumption of cross-LoC trade and traffic can help in building confidence.

How things evolve will also depend on the response of regional and global actors. Many analysts have suggested that last week’s meeting was part of an elaborate exercise orchestrated by the United States to facilitate its peaceful retreat from Afghanistan. It may be recalled that in his first term in office President Barack Obama had named Richard Holbrooke as the US special envoy for Afghanistan and Kashmir, linking the American exit from the former to a resolution of the latter. The Manmohan Singh government flatly refused to allow Mr Holbrooke to land in New Delhi till President Obama delinked the two.

President Joe Biden, who comes from the same stable, has been cleverer.

Without making any explicit link between the two he is seen as having pushed India and Pakistan into addressing both issues together. This would explain much toing and froing by the external affairs minister and the national security adviser to countries that are obviously involved in facilitating the transition in Afghanistan.

That the United States, China, Russia and Pakistan would have an interest in stabilising Kashmir as part of the transition in Afghanistan is entirely understandable. But the question that still remains is if half-hearted and self-serving initiatives pursued through some discredited leaders will be welcomed in the Valley. The challenge of winning the hearts and minds of the Kashmiri people and finding a final solution acceptable to all concerned remains.