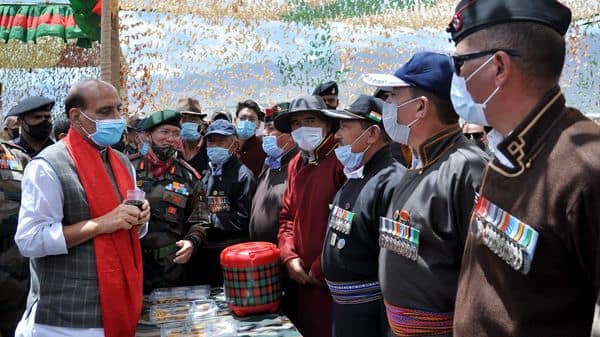 NEW DELHI : Defence minister Rajnath Singh on Sunday lauded the dedication of Indian soldiers and veterans towards the country as an “exemplary example”, soon after arriving in Ladakh on a three-day visit aimed at taking stock of India’s military preparedness against the backdrop of tensions with China.

It is Singh’s first visit to Ladakh after the Indian and Chinese militaries pulled back troops, tanks, infantry and other equipment from the Pangong Tso lake earlier this year.

In Leh, Singh interacted with senior elected representatives of Kargil, Leh and Ladakh Autonomous Hill Development Council which aims at the overall development of the regions, a government statement said.

According to the government statement, Singh’s visiting the region to “inaugurate infrastructure projects constructed by Border Roads Organisation (BRO) and interact with troops deployed in the region.”

There was no confirmation, however, about a visit by him to the Line of Actual Control-– that separates India and China after their 1962 war but two people familiar with Singh’s visit said the minister will review India’s operational readiness.

India last year in May detected Chinese troops inside its territory sparking tensions that have now lasted almost 14 months. In June last year, tensions spiked after Indian and Chinese troops clashed in Galwan in eastern Ladakh, killing 20 Indian soldiers. Beijing later said it had lost four of its soldiers in the clash, seen as the first to cause casualties in more than four decades. Both sides have mobilized an estimated 50,000 to 60,000 troops along the LAC.

In February the two sides disengaged from the banks of the Pangong Tso lake seen as one of the key points of dispute during the current standoff. But there has been no progress on disengagement since. On Friday, diplomats from the two countries had met to discuss easing of tensions but only agreed to ensure stability at their borders and continue discussions to find an early solution to tensions at existing friction points — Hot Springs, Gogra and Depsang.

Last month, Indian army chief Naravane said that there can be no de-escalation without complete disengagement at all friction points in eastern Ladakh and that the Indian Army is prepared for all contingencies in the region.