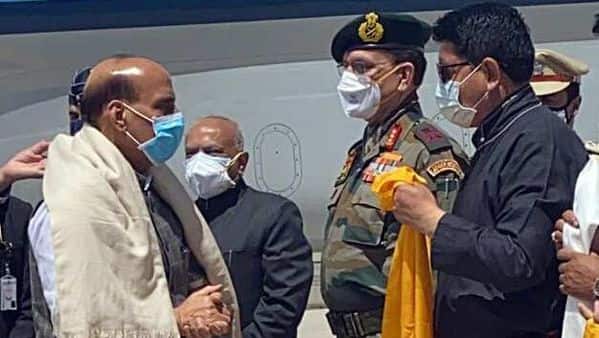 Defence Minister Rajnath Singh on Sunday assessed India’s military preparedness on the first day of his three-day visit to Ladakh.

Singh’s visit to Leh, Ladakh comes two days after India and China held a fresh round of diplomatic talks to resolve the prolonged military standoff that began in early May last year.

Besides, it is Singh’s first visit to eastern Ladakh after the Indian and Chinese militaries pulled back troops, tanks, infantry and other equipment from the Pangong lake areas in February as part of an agreement.

During the visit, Singh was given a detailed briefing about the prevailing situation in the region and India’s combat readiness by top commanders of the Army at the Leh-based headquarters of the 14 Corps.

The defence minister, accompanied by Army Chief Gen MM Naravane, was also apprised about various aspects relating to the deployment of troops.

Listing out other measures taken by the government to ensure the welfare of the veterans, Singh said several steps have been taken to address the issue of resettlement, including organising job fairs through Directorate General Resettlement.

He added that numerous online services under ‘Digital India’ have been introduced for the veterans. These include the launch of ‘e-Sehat’ portal to provide telemedicine services, especially during the ongoing Covid-19 pandemic and the introduction of the Interactive Voice Response System (IVRS) to address the problems faced by the ex-servicemen, he added.

In the three-day visit, Singh is scheduled to visit various key formations and high-altitude bases in the region to assess the ground realities as well as to boost the morale of the troops guarding the Line of Actual Control (LAC) in a hostile environment.

This week, India blamed China for the standoff saying its amassing of a large number of troops close to the border and attempts to unilaterally alter the status quo along the LAC last year were responsible for seriously disturbing peace and tranquillity in the region.

According to military officials, each side currently has around 50,000 to 60,000 troops along the LAC in the sensitive sector.