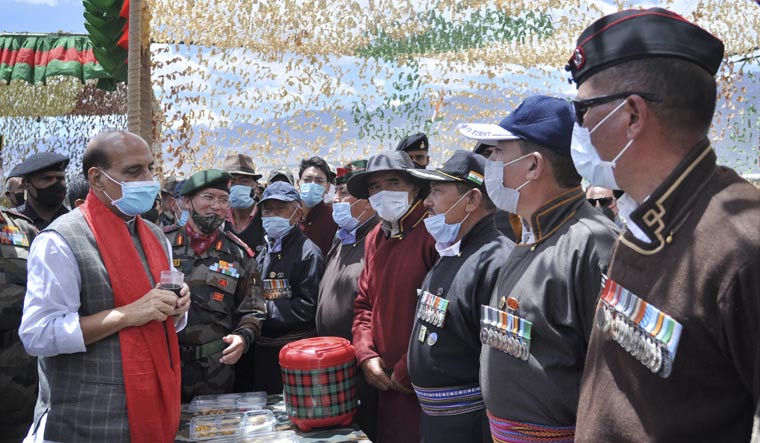 Defence Minister Rajnath Singh on Sunday carried out a comprehensive review of India’s military preparedness in eastern Ladakh on the first day of his three-day visit to the region amid a deadlock with China over the next stage of disengagement at several friction points.

Singh was also apprised about various aspects relating to the deployment of troops as well as measures taken to bolster operational readiness to deal with any misadventure by the adversary, they said.

In an interaction with a group of around 300 armed forces veterans including Ashok Chakra awardee Naib Chhering Mutup (Retd) and Maha Vir Chakra winner Colonel Sonam Wangchuk (Retd), Singh said the dedication of Indian soldiers and ex-servicemen towards the country is an “exemplary example”.

In Leh, Singh held talks with Lt Governor of Ladakh RK Mathur and met senior elected representatives of Kargil, Leh and Ladakh Autonomous Hill Development Council with a focus on the overall development of the regions, officials said.

The defence minister is scheduled to visit various key formations and high-altitude bases in the region to assess the ground realities as well as to boost the morale of the troops guarding the Line of Actual Control (LAC) in a hostile environment.

“The dedication of our soldiers and veterans towards the country is an exemplary example. I express my gratitude from the bottom of my heart to all,” Singh said during the interaction with the ex-servicemen.

“Our aim is that all of you should be taken care of in the same way you had taken care of the country’s security. Despite this, if you have any problems somewhere, then a helpline has been arranged for to address them,” he said.

It is also Singh’s first visit to eastern Ladakh after the Indian and Chinese militaries pulled back troops, tanks, infantry and other equipment from the Pangong lake areas in February as part of an agreement.

Singh’s visit to the region also comes amid fresh sparring between India and China over the standoff.

In his address to the veterans, the defence minister reiterated the government’s commitment to their welfare.

He said Prime Minister Narendra Modi’s decision to roll out the ‘One Rank One Pension’ scheme, ending a decades-long wait, was a testimony to the government’s unwavering commitment towards the welfare of the veterans.

Listing out other measures taken by the government to ensure the welfare of the veterans, Singh said a number of steps have been taken to address the issue of resettlement, including organising job fairs through Directorate General Resettlement.

He added that a number of online services under ‘Digital India’ have been introduced for the veterans.

These include the launch of ‘e-Sehat’ portal to provide telemedicine services, especially during the ongoing COVID-19 pandemic and the introduction of the Interactive Voice Response System (IVRS) to address the problems faced by the ex-servicemen, he added.