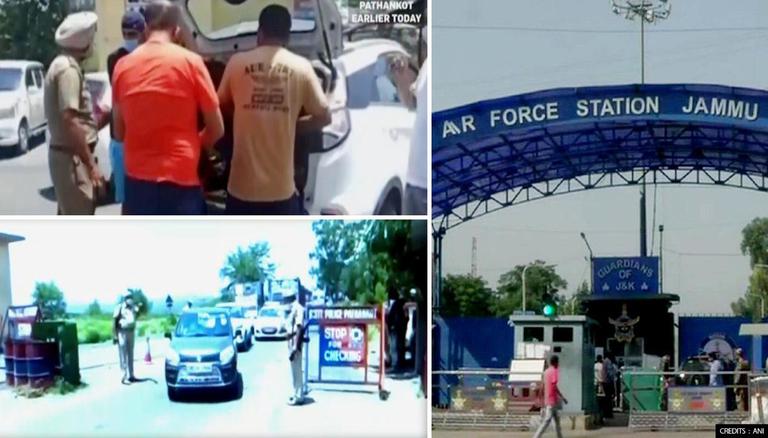 Pathankot district has been placed on high alert after two explosive-laden drones crashed into the Air Force station in Jammu on the intervening night of June 26-​27. Vigil was being maintained near key installations in Pathankot. Police personnel have also been deployed at all exit and entry points of the city. Multiple search operations are currently being carried out in different parts of the city.

Anti-riot vehicles have been deployed across the city and checking of vehicles on the streets has intensified. They are also checking the identity of every person in search of the suspects.

Pathankot SSP Surendra Lamba told PTI, “Whenever there is an incident of this kind, a maximum alert is sounded in neighbouring areas.” He also said that additional forces have been deployed and they are vigorously checking inter-state border movement. Specialised commandos and SWAT teams of Punjab Police have also been deployed, he added.

Search operations are also being carried out in rural areas as it is being anticipated that some suspects could hide in the nearby villages.

Earlier, in 2016, the Pathankot air base had come under terror attack from four Pakistan-based Jaish-e-Mohammad terrorists. Later, all four insurgents were killed by NSG commandos who were specially flown in from New Delhi on the intervening night of January 1 and 2, 2016.

On Sunday, two blasts occurred in the premises of the technical area of the Jammu airbase, which were later confirmed to be drone attacks. The blasts were heard within a gap of 5 minutes, the first blast sound is captured in the CCTV at 1.37 am while the second at 1.43 AM. NIA reported that the IED-fitted drone came from across the International border. Two Indian Air Force (IAF) personnel have suffered minor injuries in the drone explosions.  IAF stations in Pathankot, Punjab, and Awantipur, Srinagar have been put on high alert as sources state that the possible target of the drones was the aircraft parked in the dispersal area, ten meters away.

The Lieutenant Governor of Jammu and Kashmir, Manoj Sinha spoke to Defence Minister Rajnath Singh and reviewed the vital security installations with senior police officers. He biiefed Rajnath Singh about the vital security installations in J&K and about the steps being taken to counter terrorists in the valley. In addition, Sinha had also chaired a meeting of top officials of the Jammu and Kashmir administration, police and other officials. The L-G has directed them to thwart any similar attempts by the terrorists.