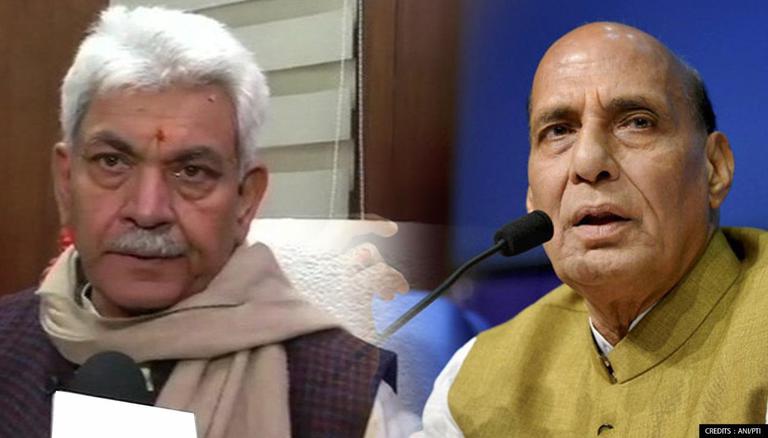 The Lieutenant Governor of Jammu and Kashmir, Manoj Sinha spoke to Defence Minister Rajnath Singh and reviewed the vital security installations with senior police officers. This comes amid Rajnath Singh’s Ladakh visit and the drone attacks on Jammu airbase on June 27. According to reports, Sinha briefed Rajnath Singh about the steps being taken to prevent such attacks in the future.

Sunday’s terror attack has caused a grave security concern for the security forces. Sinha also briefed Rajnath Singh about the vital security installations in J&K and about the steps being taken to counter terrorists in the valley. In addition, Sinha had also chaired a meeting of top officials of the Jammu and Kashmir administration, police and other officials.

The L-G has directed them to thwart any similar attempts by the terrorists. Apart from this, Sinha has reportedly gone through the details of all security layers while calling for an audit of all forces and security installations. Meanwhile, the Defence Minister has also chaired a high-level meeting of the officers of the Indian Army, Border Roads Organisation (BRO) and with officials of Union Territory of Ladakh and the Parliament.

Earlier on Sunday, Defence Minister Rajnath Singh carried out a comprehensive review of India’s military preparedness in eastern Ladakh on the first day of his three-day visit to the region amid a deadlock with China over the next stage of disengagement at several friction points. The defence minister, accompanied by Army Chief Gen MM Naravane, was given a detailed briefing about the prevailing situation as well as India’s combat readiness in the region by top commanders of the Army at the Leh-based headquarters of the 14 Corps, officials said.