The Indian Air Force base at Jammu came under a drone attack in the wee hours of Sunday, the first such assault on a military installation in the country.

The attack points to a new threat that has emerged from small drones, which are hard to detect but can carry up to 10 kg of explosives

All angles being probed

Jammu base is used by UAVs and helicopters. A direct hit at the hangar would have caused greater damage

Chandigarh: Military installations have been placed on high alert. “The possibility of such incidents (Jammu blasts) at other places cannot be ruled out. Surveillance in and around military bases has been stepped up and additional resources have been deployed,” an officer said. TNS

Two IAF personnel suffered minor injuries while the roof of a building in the technical section of the base was damaged as the explosive pierced through it. Security and intelligence-gathering agencies are yet to ascertain if the explosives were carried by drones or the drones themselves were designed to explode on command from the controller. 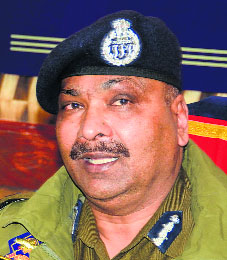 The attack at the IAF station in Jammu is a terror attack.

“The attack at the IAF station in Jammu is a terror attack,” Jammu and Kashmir police chief Dilbag Singh said, adding that the police and other agencies were working with the IAF to unravel the plan behind the attack. A team from the National Investigation Agency, which is likely to taken over the probe, was also at the spot. An FIR has been registered at the Satwari police station under the anti-terror Unlawful Activities (Prevention) Act that allows the arrest of suspects and their detention for up to six months without evidence.

Two separate explosions at an interval of 5 minutes — 1:27 am and 1:32 am — rocked the air base. The attack points to a new threat that has emerged from small drones which are hard to detect but can carry up to 10 kg of explosives. The air base is located 14 km from the border with Pakistan. Agencies are trying to ascertain if the drone (or drones) was being controlled from across the border or from within India. It is not impossible for a controller to handle it sitting 14 km away as such technology does exist. It would however need powerful radio signals, which are normally with the military.

In the past two years, more than 20 drone intrusions have been made from across the border in Punjab and Jammu and Kashmir. Automatic weapons like AK-47, drugs and ammunition have been dropped in the past. At least one such drone, of Chinese make, was seized by the Punjab Police from a village in Gurdaspur last year.

The J&K police chief, meanwhile, said another terror strike was averted when a terrorist, believed to be working for Pakistan-based outfit Lashkar-e-Toiba, was arrested with an improvised explosive device (IED) that was to be used for a strike “in a crowded place”. The arrest is not linked to the airport attack, Dilbag Singh said.