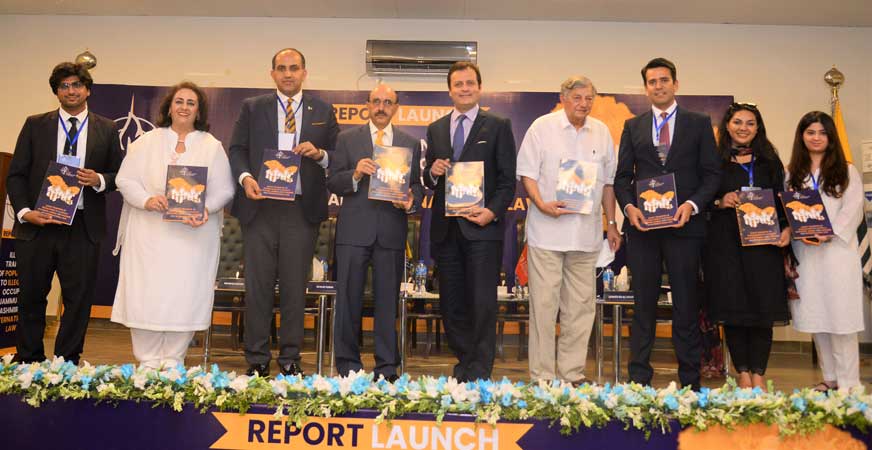 The Center for Law and Security (CLAS) in collaboration with the Azad Jammu and Kashmir President Secretariat Islamabad organized the launch of a report and a panel discussion on the illegal transfer of population to Indian Illegally Occupied Jammu & Kashmir (IIOJ&K) and international law at Kashmir House, Islamabad, according to a press release.

The panel discussion focused on India’s violation of international law, options for Pakistan and the initiatives the Pakistani government has taken with regards to Kashmir.

Welcome remarks were delivered by Faisal Mushtaq who mentioned the previous conference held by CLAS on illegal transfer of population in IIOJK in January 2021. He said that the conference served as a platform for insightful discussions and conclusive recommendations. He emphasized on the need to advocate for the rights of the Kashmiris and the crimes committed by India in IIOJK.

The panel discussion was moderated by Executive Director CLAS Rehman Azhar. The discussion started with Ahmer Bilal Soofi who stated that no one has a more documented legal position besides Kashmir because of the UN Resolutions. He mentioned that India’s moves are against their own constitution. He mentioned that Pakistan has a very strong case against India regarding Kashmir. He praised the team of CLAS and their report. Ambassador Riaz Khokhar, while discussing the recent meeting of Prime Minister Narendra Modi with Kashmir leaders, called it a public relations stunt. He further stressed that Pakistan has a strong legal case, however, the international community sides with India. He noted that CLAS and its work is educating people regarding Kashmir and international law.

Senator Walid Iqbal talked about the power of social media and why it’s necessary to spread awareness. He mentioned that the Senate will hold a spirited debate regarding Kashmir. Sobia Kamal Khan mentioned the human rights violations Kashmir has faced and reassured that Pakistan will always stand by Kashmir.

Shehryar Khan Afridi called the report the need of the hour. He stressed upon the importance of having such discussions. He said that Kashmir has never been taken seriously. He praised Prime Minister Imran Khan on his initiatives regarding Kashmir which include creating committees and advisory boards. He mentioned Pakistan Government’s collaboration with important stakeholders across the globe. He discussed the interactive sessions that were held around the world regarding Kashmir to spread awareness. He also talked about bringing the Kashmiri narrative to the digital front by airing documentaries and films to highlight the atrocities faced by the Kashmiris.

Sardar Masood Khan emphasized on the struggles of the Kashmiris and their will power to still fight. He said that if the Kashmiris were the ones to give up, India would have taken over Kashmir many years ago. He further mentioned that communication builds narratives and enables an environment which allows one to seek justice which is why it is important to raise awareness. He discussed India’s strategy in building the terrorism narrative and Pakistan’s way forward by showing Kulbhushan Jadhav as an innocent citizen while portraying the Kashmiris as terrorists.

Sardar Masood Khan also discussed several international humanitarian law and human rights violations by India. He stressed that Pakistan’s case against India is strong however Pakistan needs to capitalize its legal resources to push the momentum forward in favour of the Kashmiri people. He praised the CLAS team for addressing the international law violations by India in IIOJK and their work on the report.