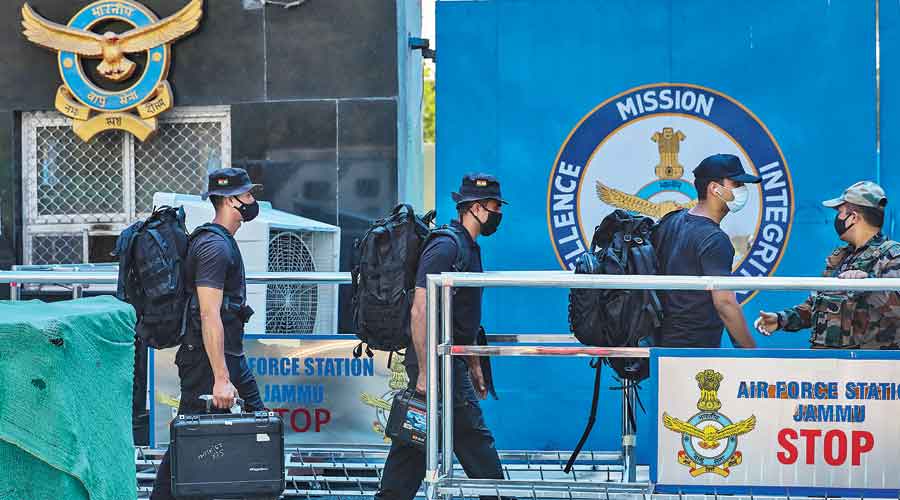 The heavily guarded Indian Air Force Station at Jammu airport was hit early on Sunday by two low-intensity blasts that police suspect were the first drone attacks on Indian soil and had been carried out by militants.

The air force had not till Sunday night confirmed the use of drones.

The IAF said two of its officials were injured but no equipment was damaged in the attack, which appears to have shaken the country’s security establishment and led to calls for a revamp of the security infrastructure at key installations.

Police sources said one of the blasts occurred at 1.47am and ripped off the roof of a building in the IAF station’s technical area, injuring two officials. The other blast took place minutes later on open ground, reportedly causing no damage.

Police and intelligence officials said the intended targets seemed to have been Mi17 helicopters and transport aircraft parked at the airport as well as air traffic control, but they had escaped unharmed. One bomb, however, landed not far from the ATC, operated by the air force.

Police officers said the remnants of drones had been found, implying that remotely operated unmanned aerial vehicles (UAVs) had been turned into improvised explosive devices to target the installation.

Former director-general of Jammu and Kashmir police S.P. Vaid said the attack had “added a new dimension” to the threat to India, and steps must be taken to protect “from the air” installations that are “protected from the ground”.

Investigations — led by the National Investigation Agency with the participation of the IAF, police and others   — are on to ascertain whether the purported drones had been launched from across the Pakistan border, which is 15km away, or from nearby areas on the Indian side.

The attack came three days after Prime Minister Narendra Modi held talks with Kashmir leaders in the first outreach since the special status was revoked.

Jammu airport is a dual-use facility that is under the air force’s control but operates passenger flights. Officials said there was no disruption in flight operations because of the explosions.

Jammu and Kashmir DGP Dilbag Singh said it was a terror attack and later told agencies that drones with payloads were suspected to have been used.

A PTI report said investigators had scanned footage from security cameras installed on the airport’s boundary walls to try and determine where the drones had come from, but the cameras were all focused on the roadside.

Sources in the security establishment said the armed forces had already procured some kind of anti-drone technology and were in the process of getting anti-drone systems in large numbers from Israel. The technologies include radio-frequency jammers that can sever communications between drones and their handlers.

The police said an FIR had been registered under the anti-terror Unlawful Activities (Prevention) Act. The NIA has taken over the probe.

Drones had earlier too been used in Jammu and Kashmir but for allegedly dropping weapons, not to carry out blasts.