“In the Middle East War of 1973… it was only when the Israeli army enhanced its technical support… that 80 percent of the damaged tanks in the war could be recovered and sent back to the battlefield… The equipment support abilities of the Israelis contributed a great deal to the reversal of their disadvantageous posture and changed the process and outcome of the war.” — PLA’s Science of Military Strategy

The position of the Chief of Defence Staff (CDS) was established for promoting jointness, integrated capability development and economising defence expenditure. Reports indicate the establishment of Integrated Air Defence and Maritime Commands in the ensuing months. An Integrated Logistics Command (ILC) is to follow. The vast array of weapons and equipment of any military represent a combat capability and retaining these in a state of readiness is a formidable task. In the Indian context, the issue assumes added importance, as a large percentage of the arsenal is of imported origin. Even in indigenous systems, the import content is high and some very critical systems continue to be imported ad infinitum. It is through a well established maintenance and refit capability that battle endurance can be maximised i.e. enable a missile to complete its flight without a malfunction; a helicopter to complete a mission without breaking down and a tank to assault an enemy position without experiencing a mission abort failure.

The ILC needs to be driven by a new kernel of thoughts relevant to the 21st century, aligned to system readiness and not procurement centered. Even Atmanirbhar Bharat has to look into issues of equipment readiness as it rolls out systems for the military. Take the case of the Tejas Light Combat Aircraft or the Arjun Main Battle Tank having an import content of over 50 percent. Ten years down the line, maintenance costs could make operational sustainment unaffordable. The record of defence manufacturing in the public sector has not been very encouraging. Even after 10 to 15 years, a number of aggregates are either on the import list or wherever indigenised, give life of 50 percent or less. If an aircraft or tank engine gives limited life, it ends up lowering sortie reliability and spiking up life-cycle costs.

A prime reason for the country remaining the largest importer of arms has been the absence of a systems view and working in silos by the various departments under the Ministry of Defence. A fire hose of information in each department can lead to collective tragedy, even if every vertical adopts the most preferred course. Some insiders have referred to it as horses pulling in different directions with the absence of institutional wisdom. There are several self-inflicted vulnerabilities as a consequence of the do nothing syndrome such as delays in recapitalisation, technology insertion (Fig 1). Acquisition delays, ageing inventory, wrong choices made have widened these gaps. The CDS needs to carve out a capability development plan with precision and command; analysing life-cycle readiness costs before arriving at total system value. The ILC could provide him this ‘Systems View’.

The nomenclature ILC reflects the logistics predominant mindset of the Indian Army (IA); the Indian Air Force (IAF) and the Indian Navy (IN) would rather prefer an integrated maintenance command which is differentiating. While operations of the IAF and the IN are platform-centric, the IA banks on boots on ground. Logistics is procurement and mass-based while engineering is centered around technology, reliability and speed. With the conventional focus on supplies, clothing and housing, the ILC may end up as a cosmetic change, as the three Services already have adequate integration in these areas. Setting up of ILC with an engineering orientation can assist theatre commands in retaining a long term capability edge; keeping the armed forces future ready. A cue can be taken from the IAF’s Maintenance Command and the United States (US) Army Material Command, both contribute to Strategic Readiness by leading sustainment efforts at the tactical, operational and strategic levels.

It is to be remembered that in any serious crisis related to national security, India will be on its own. There is, therefore, the need to think beyond the algorithm to sustain all round operational capabilities that are distinctive in character, content and capacity. A unified engineering support will revolutionise the impact of equipment capability on mission outcomes, as was achieved by Israel in 1973, where initial surprise and the adversary’s quantitative advantages were offset by superior technical capability. The ILC needs to be rechristened as Integrated Readiness and Engineering Command (IREC) to set its sights towards its True North i.e., to sustain the readiness of weapons and platforms of India’s armed forces.

From a military operational context, the creation of the IREC is highly desirable. The services often point to inadequacy of funding for modernisation. What is not conveyed is that due to budgetary squeeze, operational capability is gravitating towards hollowness; rebuild and upgrades are delayed, there are critical shortages of spare parts, minimum readiness levels are sustained through hanger queens and deviations. Technicians leaving a store with four out of ten parts i.e. 40 percent fill rate is a common phenomenon. The IA is the most affected as its manpower costs take away a large chunk of the pie. Platform readiness is given due importance in the IN and the IAF; the two primary verticals being operations and engineering. The IA still takes a generalised view, content with numbers, not capability. It is time to make the shift towards quantifiable measures of force readiness.

The current stand-off at the Line of Actual Control (LAC) in Ladakh has brought to the fore several shortfalls in capability and operational readiness. A logistics world view over the years in the IA has created gaps in equipment capability which constrain the gallant Indian soldier resulting in high casualties. While there is great emphasis on stocking ammunition, rations, water and the like, not much attention is paid to assault rifles, MMGs, mortars, thermal imagers, tanks, guns delivering mission capabilities as per planned operational tempos. There is a need to visualise war game scenarios and probabilities of action by an increasingly capable adversary and develop capabilities. Integrated engineering support based on a tri-service capability to sustain armaments, missiles, radars, tanks, aircraft, helicopters and warships would be both operationally necessary and cost effective. It will conserve resources, downsize skilled workforce, prevent duplication of technical infrastructure, lower inventory costs and turbo-charge indigenisation. IREC can become a centre of excellence in systems engineering of weapons from cradle to the grave, ushering the concept of Through Life Capability Readiness (TLCR). TLCR is an approach to acquisition and in-service management of an acquired capability to ensure that it remains mission capable through life.

Today, each service has its integral Maintenance, Repair and Overhaul (MRO) infrastructure that comprise Close Support (CS) and Deep Support (DS) outfits. CS comprises Organisational (O) and Intermediate (I) whereas DS comprises Depot (D) level support. While CS is located close to weapons deployed, DS is spread throughout the country as Base Repair Depots (BRD), Army Base Workshops (ABW) and naval dockyards. These are specialist enterprises that carry base re-fit activities and are the last port of call. CS and DS are combined for elementary systems such as small arms, instruments and vehicles in some locations. There is duplication of engineering infrastructure across three services and optimisation is certainly called for. For example, ABW executing DS of armaments can effectively support naval guns and air force cannons. Missile repair centres of the IN can provide all round support. BRDs can service UAVs and aviation assets and similar integration can be extended to radars, communications, and electro-optical systems. As more indigenous systems are rolled out, an integrated engineering support will be more economical and effective like medical support.

The Iceberg Effect and TLCR

Operation and support costs are fait accompli once an acquisition has been made. Post introduction, the weapon has to be maintained as per OEM protocols to remain mission capable. A few years after procurement, the OEM generally notifies that the system will soon become obsolescent and buoys up the prices of sub-systems and spares. The IREC could find an enduring solution to this problem. It is common knowledge that any Main Battle Tank or fighter aircraft requires three to five times the acquisition cost to be sustained over the life-cycle. Called the Iceberg Effect (Fig 2), it is a response customised by OEMs to India’s poor acquisition management. It is time to graduate to value-centric procurement and TLCR. 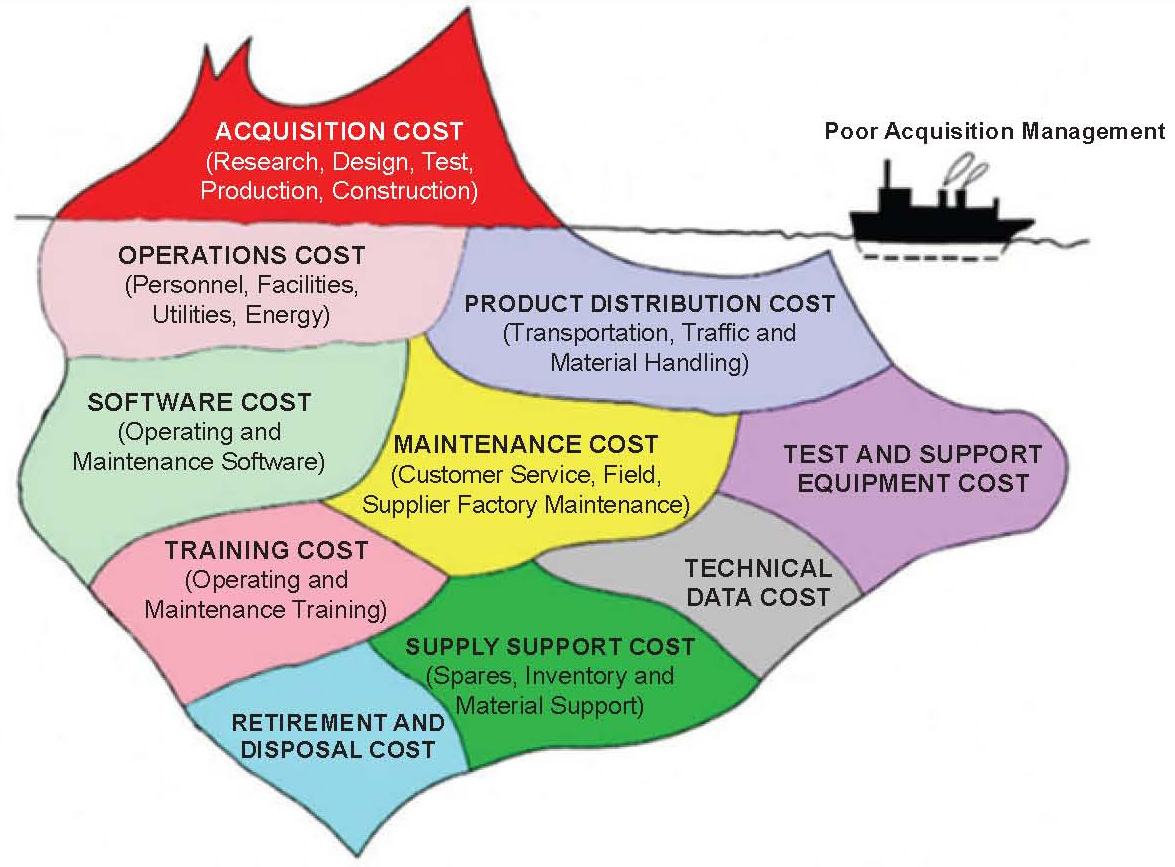 The IREC: Structure and Functions

The IREC needs to be organised to sustain integrated readiness, maximise system availability, manage obsolescence, improve the quality of indigenous manufactures and handhold local industry on behalf of the CDS. The Directorates of Quality Assurance and Standardisation could be merged with the IREC to make technical support all encompassing. IREC could comprise four verticals namely MRO, Indigenisation, Sustainment Engineering and Testing & Quality Assurance. Prominent functions could be:–

The IREC could scale up equipment readiness with availabilities above 90 percent as against the current level of 60 to 65 percent. The TLCR will ensure that the military remains agile to respond to capability surprises. It could turbo-charge MSMEs through localisation of spares and sub-systems. Impressive cost savings could come through downsizing of workforce, automation, leaner stocks, indigenisation and resource sharing. There are approximately 2.25 lakh maintainers (tri service) and another 10,000 or so engaged in MRO activities with DPSUs. A mere 10 to 15 percent optimisation through outsourcing implies downsizing by 25,000 to 30,000 personnel. Highly skilled technicians could be gainfully utilised through lateral absorption in ordnance factories and DPSUs bringing the collectivist culture of teamwork and loyalty with focus on system effectiveness and quality in these outfits.

There is a rich cache of technical data and tacit knowledge with maintainers on weapon systems. They know how platforms are wired, operated, deployed and what its vulnerabilities are. Engineering skills do not happen overnight, these have to be nurtured. Today, these lie fragmented and distributed; it is time to consolidate and document it as Institutional Wisdom. Systems such as the Apache, M777, the S400, Tejas and K9 will need heavy payouts for remaining mission-capable. Indigenous warships have major systems such as propulsion, navigation, armaments and sensors coming from abroad. There is a need to progressively enhance indigenous content and provide a hedge against disruptions from foreign supply chains. Israel is a shining example of self reliance, achieving it in its stride as it set out to address multiple security challenges, using skills and competencies of the Israel Defence Forces. A long-term plan maximising the integration of locally developed sub-systems in upgrade projects, is the key to Atmanirbhar Bharat.

Establishment of the IREC could bring in higher operational effectiveness through TLCR and savings by downsizing, resource sharing, optimisation and merger of redundant organisations. The IREC could be the military’s sole repository of institutional wisdom on systems engineering and advise the higher defence leadership on acquisition management and life-cycle support. This is the surest way of addressing critical operational and technology security gaps. The IREC could provide theatre commands reliable weapons to develop composite responses to capability surprises, making formations deploy not with deficiencies, but known capabilities. It could assist the CDS to give “Proudly Made in India” a brand, a positive halo and bring to fruition his vision and the aspiration of every Indian, “equipping the military with Indian designed and developed weapons for defending India.” If required, logistics components could be put as add-on once the IREC has been stabilised.