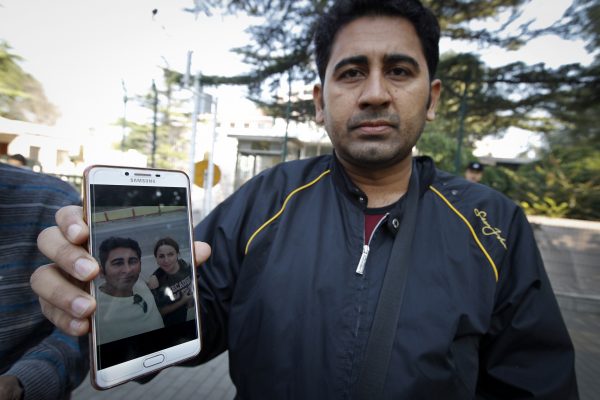 On May 7, in the hours after Friday prayers, textile and carpet merchant Abdul Wali was preparing to lock up his shop in Islamabad in preparation for the COVID-19 lockdown that had been imposed in the Pakistani capital. The deputy commissioner had announced that public transport would be suspended after 6 p.m., so Wali faced a race against time if he wanted to catch one of the last few buses heading north to spend Eid-ul-Fitr with his family like every year.

During the rush to wrap things up, Wali received a call informing him that his eldest brother had been abducted.

“My brother’s wife hadn’t heard from him for quite a few days. She was informed by a few close friends of my brother that he had been kidnapped by local authorities,” Wali told The Diplomat.

Abdul Wali belongs to a Uyghur Muslim family originally hailing from Dabancheng district of Urumqi, the capital of China’s Xinjiang Uyghur Autonomous Region. His father moved to Pakistan in the 1960s amidst China’s initiation of curbs on Uyghur culture and the locals’ practice of Islam. After doing a few small-time jobs he established an export business and married a Pakistani woman, Wali’s mother, a few years after moving to the country, eventually inviting some members of the extended family to move to Pakistan as well.

Wali says his brother, an Islamic cleric who travels across the region as part of missionary exercises, has been accused of being a member of the East Turkestan Islamic Movement (ETIM), an Islamist militant group outlawed as a terror outfit in both China and Pakistan.

“My brother hasn’t touched a gun in his life. He is a preacher of Islam and has been targeted because he speaks up for his fellow [Uyghur] Imams and Muslims, who are being persecuted in our home country, as the Muslim ummah [community] watches in silence,” Wali said.

Wali has now moved to be with his extended family in a northern Khyber Pakhtunkhwa town. Together, they await further news on his brother, who has now been missing for almost two months. Having missed his bus on the day the lockdown was imposed in the capital, Wali got a ride from a friend, Ibrahim Ahmed, who travels the route as part of his transport business.

Ahmed, whose own father had moved from a village in Xinjiang’s Kashgar city to a town near Gilgit in northern Pakistan in the 1990s, reveals that the Pakistani Uyghur community has increasingly suppressed its identity in recent years amidst growing Chinese influence.

Gilgit-Baltistan, a geopolitical loophole that borders Xinjiang and is a part of the longstanding Kashmir dispute, is the gateway to the $62 billion China-Pakistan Economic Corridor (CPEC), Beijing’s biggest overseas investment and an important part of its headline Belt and Road Initiative (BRI). Pakistan, which loudly proclaims CPEC to be its economic lifeline, has increasingly acquiesced to Chinese demands since the initiation of the project, which couples financial misappropriation with human rights abuses. This now includes clamping down on the Uyghurs. In recent years Pakistan’s contribution in that regard has evolved from counterterrorism measures taken against Uyghur-origin militants affiliated with South Asian jihadist outfits to lifting individuals at the behest of Chinese government.

In 2018, a protest was initiated by Pakistani men whose Uyghur wives had been detained in Chinese internment camps. However, the protesters were threatened and dispersed, leaving individuals to plead their case. Among them is a Lahore-based trader Imran Malik.

“It’s been three years now that I have been registering protests regarding by wife’s whereabouts. She went back to China in 2018, and I haven’t heard from her since. I don’t know where she is and how she is,” Malik told The Diplomat.

Rights groups fear that Malik’s wife, along with over a million other Uyghur Muslims, is detained in Chinese “re-education camps” as part of Beijing’s erasure of Uyghur Islamic identity. These camps have been designed as part of Beijing’s bid to ensure that the Uyghur Muslims “unlearn” Islamic rituals, which the Chinese government interprets as the root of violent separatism in the country. There have been reports of local Uyghurs being forced to eat pork, which is forbidden according to Islamic theology.

Thousands of mosques have been destroyed in Xinjiang. There have been bans on Islamic clothing including veils and “abnormal beards.” There has been specific targeting of Islamic imams, along with bans on fasting during Ramadan for government workers and anyone under the age of 18. The crackdown during Ramadan this year leading up to Eid-ul-Fitr resulted in mosques being empty and few locals being seen openly fasting in Xinjiang.

On May 13, the Uyghur Human Rights Project (UHRP) released its “Islam Dispossessed” report, which cites the case of 1,046 Turkic origin imams being detained in Xinjiang. Among the countries that have helped China arrest imams, and carry out what UHRP says “likely amounts to genocide under international law,” is Pakistan. Many of the imams were trained in madrassas in Pakistan, which UHRP says has “capitulated quickly to Chinese demands.”

“With its crackdown, Pakistan has helped mainstream the Chinese narrative on ETIM, which wasn’t heard of before 9/11,” said UHRP’s Peter Irwin, the author of “Islam Dispossessed,” while talking to The Diplomat.

Irwin highlights the fact that Pakistan is completely toeing the Chinese line on the persecution of Uyghur Muslims, by denying that any action is taking place against the community. As the Chinese government limits media exposure to the camps, its narrative is facilitated by Muslim countries downplaying the crimes against the Uyghur population, according to Irwin.

“It is a battle of narratives, but there is just overwhelming evidence with regards to what is being done to Uyghur Muslims in Xinjiang. We have testimonies from imams, we have interviews with many other locals who have escaped captivity. There is a clear picture of what these camps really are,” Irwin said.

“Yes, there are cases of anti-Muslim actions being taken in the West as well – which countries like Pakistan are extremely vocal against. But when you compare the magnitude of what is going on in China, there really is no comparison,” he added.

Zumretay Arkin’s family was among those that managed to escape from Xinjiang. Arkin is now the program and advocacy manager for the World Uyghur Congress (WUC). She reveals that while Pakistan was an escape route of choice for many Uyghurs, today many members of the community who have been in Pakistan for decades fear for their future.

“We share a border with Pakistan, which is also an Islamic country. It was easier for us to find refuge there decades ago,” Arkin told The Diplomat. “But now Pakistan is deporting Uyghur Muslims, putting our lives at risk. Now Pakistani agencies are reporting directly to Chinese authorities in the ongoing crackdown.”

Arkin is especially critical of the current Imran Khan-led government in Pakistan for “echoing Chinese propaganda.” The WUC condemned Khan’s interview with Al-Jazeera in 2019, where he said he was “not aware” of what is happening to Uyghur Muslims, despite the Pakistani premier’s vocal support for Kashmir, Palestine, and even Muslims in the West, usually centering around Islamist narratives.

While Imran Khan says he is in “private communication” with the Chinese government, former Foreign Minister Khurshid Kasuri told The Diplomat that he had found the Chinese “pretty open” in their communication during his time in the foreign office.

“Turkey should be vocal about the Uyghur issue. They are Turkic origin people. It is not in Pakistan’s interest to discuss issues related to China publicly. Because when there are public condemnations, it is not based on any moral position, but an exhibit of a whip being used to ascertain particular political goals,” Kasuri said.

However, Zumretay Arkin says Imran Khan has gone beyond mere silence on the matter. On the Uyghur question, Khan regularly says that China has done a lot for Pakistan, implying that the country cannot speak up even if it wanted to owing to the economic cost. Last week, in an interview with Axios on HBO, Khan once again expressed similar subservience to China and denialism vis-à-vis Uyghur Muslims.

“This is clear gaslighting. The evidence is not just provided by us, there are many reporters, still reporting on the persecution. Scholars and researchers have worked on it for decades. There have been document leaks directly from the Chinese government. Millions are speaking up on the human rights abuses against Uyghur Muslims, which Pakistan is now participating in,” said Arkin.

In its 2017 report “Seeking a Place to Breathe Freely,” the WUC published a list of Uyghurs that had been deported by the Pakistani government. The numbers have exponentially increased since the report was published. With mass surveillance, tracking, and other artificial intelligence software, ever-more sophisticated technology is being used by Chinese authorities, now in tandem with Pakistani authorities, to persecute Uyghur Muslims.

“This is the first modern tech-assisted genocide in history,” said Peter Irwin of the Uyghur Human Rights Project.

*Some names have been changed due to security concerns