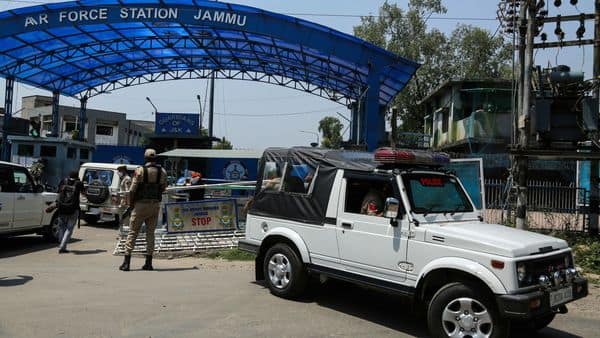 Two explosives-laden drones crashed into the Indian Air Force station at Jammu airport in the early hours of Sunday. The IAF said two low intensity explosions took place in the technical area of Jammu Air Force Station. The first blast took place at at 1:27 am and the second at 1:32 am. “One caused minor damage to the roof of a building while the other exploded in an open area. There was no damage to any equipment,” it said. Following the explosions, security was tightened up in and around the base areas including key installations in nearby regions. The NIA team reached the Air Force Station in Jammu to probe the explosions.

Here’s what we know so far

NIA at IAF base in Jammu, likely to take over probe

A team of National Investigation Agency or NIA has arrived at the Air Force base in Jammu. According to reports, the central probe agency is all likely to take over the blasts case. Some officials informed the news agency that the NIA personnel were already supervising the investigation at the scene of the explosions after joining the probe.

An FIR has been registered under the Unlawful Activities (Prevention) Act. The officials suspect that the Pakistan-based terrorists, perhaps for the first time, used unmanned aerial vehicles to target the base. The case has been registered under relevant sections of the Explosive Substances Act, Unlawful Activities (Prevention) Act and the Indian Penal Code (IPC) at Satwari police station on the application of a junior warrant officer of the IAF.

Blasts at the IAF station is a terror attack: J&K DGP

J&K DGP Dilbagh Singh has termed the explosions as a “terrorist attack”. He said: “The attack at the IAF station in Jammu is a terror attack.” Speaking to PTI, he said the police and other agencies were working together with Air Force officials to unravel the plan behind the attack.

Jammu airport is a civil airport with the runway and the ATC (air traffic control) under the IAF. Jammu Airport director Pravat Ranjan Beuria told PTI that there was no disruption in flight operations due to the explosions. “Flights to and from Jammu airport are operating as per schedule,” he said.

In the wake of explosion at IAF base in Jammu, an alert was sounded in Punjab’s border district of Pathankot. The officials said tight vigil was being maintained near key installations in Pathankot. The Pathankot Air Force base had come under terror attack in 2016. Police said patrolling has been strengthened near sensitive areas in and around Pathankot and additional forces have been deployed. Speaking to PTI, Pathankot SSP Surendra Lamba said: “We are on our guard in view of the situation. Whenever there is an incident of this kind, maximum alert is sounded in neighbouring areas.” He also said that the forces were checking inter-state border movement. He also said specialised commandos and SWAT teams of Punjab Police were being deployed strategically.

J&K DGP Dilbagh Singh said the use of drone with payload in both the blasts at Jammu airfield suspected to drop explosive material. “Another IED weighing 5-6 kgs was recovered by Jammu police. This IED was received by LeT outfit operative and was to be planted at some crowded place. Major terror attack has been averted with this recovery. The suspect lifted being interrogated. More suspects likely to be picked up in this foiled IED blast attempt. Police also working on Jammu airfield blasts along with other agencies,” he said.