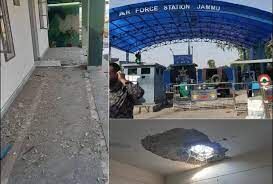 Jammu: Two minor blasts reportedly took place at the Air Force base in Jammu Airport that is believed to be dropped from a drone, the first of its kind attack India ever has witnessed on Sunday.

The roof of a building in the technical section was damaged and two Air Force personnel are said to have been injured in the blasts that occurred at 1.37 am and 1.42 am on Sunday. Reports suggested that the high-security airport is located around 14 km from the border with Pakistan.

However, the confirmation whether it was a drone or something else is yet to be confirmed and an investigation is on over the suspicion that some aerial platform was used to drop the bombs.

Kashmir police chief Dilbag Singh called the blasts a terror attack and an FIR under the anti-terror Unlawful Activities (Prevention) Act has been registered. The National Investigation Agency has reportedly taken over the case.

The sound of the explosions is reported to have been heard kilometres afar, creating some panic among residents nearby. The injured officers, who have been given first aid for their splinter injuries, did not confirm whether they heard drone before the explosions, the Military sources said.

Sources said that the incident happened hours before Defence Minister Rajnath Singh and Army Chief General MM Naravane began their three-day visit to Ladakh to take stock of the country’s military readiness in the wake of an existing standoff with China along LOC.

Two persons, reported to have links with the Lashkar-e-Taiba, were arrested with an IED who were, J&K Police said, out there to attack a crowded place. However, so far no links established between the arrest and the alleged drone attack.

Reports claiming Pakistan using drones to drop weapons in the Indian territory have been surfaced earlier.