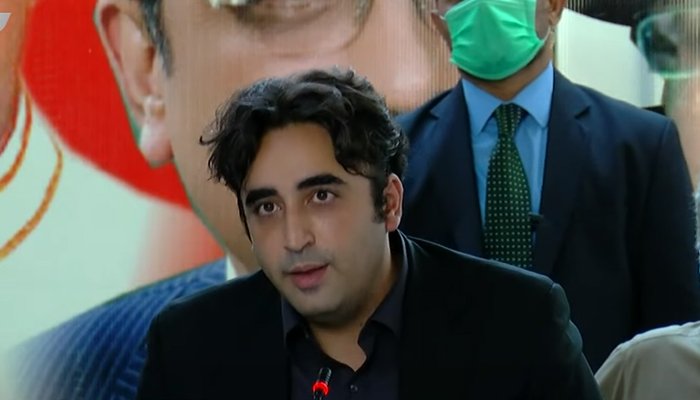 Pakistan People’s Party Chairman Bilawal Bhutto-Zardari has said that he has full faith in his party’s candidates in Azad Jammu and Kashmir and they would form a government in the autonomous region after the upcoming elections, Geo News reported.

The PPP leader, while speaking to the media outlet, lashed out at Prime Minister Imran Khan, saying that he had always criticised his policy for Kashmir and his attitude towards the region.

Bilawal is in Kotli to muster support and galvanise PPP voters ahead of the 11th General Elections of Azad Jammu and Kashmir. The polls will be held on July 25.

“There is a clear difference between the attitude of Imran Khan and the prime ministers before him,” he said.

Bilawal said that if the PTI believed its strength lay in the fact that it was in power at the Centre, then he believed the PPP was his strength.

“I have full faith in the PPP candidates (of Azad Kashmir). They will stand by us,” he added. “We believe in our party’s strength and that our candidates have what it takes to form PPP’s government in Kashmir.”

The 11th General Elections of Azad Jammu and Kashmir will be held on July 25, the region’s election commission had announced earlier this month.

According to the schedule announced by Chief Election Commissioner retired Justice Abdul Rasheed Sulehria, the nomination papers will be filed by the candidates before the returning officers on or before June 6 up till 4pm while the scrutiny of nomination papers will be conducted the very next day am onwards and the lists of validly nominated candidates will be publicised on the same day.

The last date for filing appeals before the election commission against the acceptance or rejection of nomination papers by returning officers has been fixed for June 27 before 2pm, while the hearing of appeals will be conducted from June 28 to 29, with the decisions announced on June 30 and July 1.

Pakistan People’s Party Chairman Bilawal Bhutto-Zardari in connection with his election campaign in Azad Jammu and Kashmir visited Dhan Gali on Friday along with Qamar Zaman Kaira, where he was greeted with rousing reception.

Thousands of party workers raised slogans on his arrival and showered rose petals on his motorcade.

Thousands of workers received their chairman with traditional zeal and fervour at Dhadial raising Jeay Bhutto and other party slogans.

Addressing PPP workers, Chairman Bilawal said that “today we are with our Kashmiri brethren with who we have shared relations from three generations”.

“Kashmiri people supported Shaheed Zulfikar Ali Bhutto. They also supported Shaheed Mohtarma Benazir Bhutto. We have struggled against dictatorships together and history is a witness to that. You had supported President Zardari and Qamar Zaman Kaira was your minister for Kashmir affairs. You supported peoples Party in difficult times as well. The development work which was carried out in Kashmir was and is unprecedented,” he said.

Bilawal said that the behaviour and policy of federal and Kashmir governments with the people is derogating. “We feel your pain because you are the comrades of Shaheed Zulfikar Ali Bhutto and Shaheed Mohtarma Benazir Bhutto and I cannot leave you at the mercy of these callous governments. Now I am among you all, and once again you have to support the PPP like you did with the Quaid-e-Awam and Shaheed Benazir Bhutto,” he added.

“If you want for the problems facing Kashmir to be solved, then you have to support the PPP. In occupied Kashmir people are fighting against Modi’s policies and here in Azad Kashmir people are fighting poverty, inflation and unemployment in Imran Khan’s government. You are suffering because of the failed and incompetent government of Imran Khan. The people of Kashmir always prospered during the PPP governments. The PPP is the only party to get you out of these sufferings. We should form a government of PPP which can not only stand up to Modi’s government but also save you from this PTIMF government,” he further said.

The PPP chief asked the workers to campaign door to door and deliver the message of PPP. He resolved that the next prime minister of Azad Kashmir will be from PPP. He asked to the people to elect PPP candidate, Afsar Shahid with a huge margin.

Bilawal said that he is always happy to visit Kashmir because the relations between the PPP and the people of Kashmir go back three generations. “Our relation is not only political but historical, and it will continue for generations to come. When you supported Shaheed Bhutto, we wrote history together. When you supported Shaheed Mohtarma Benazir Bhutto, we also recorded a history,” he said.

He said that “when you supported President Zardari, the PPP government carried out historic development. Now, we have started the journey of a new generation”. “The youth of both Azad and Occupied Kashmir are also starting a new journey. They are fighting against Modi’s government in Occupied Kashmir and against Imran Khan’s policy of unemployment, poverty and inflation in Azad Kashmir. They cannot send their children to schools, buy medicines for their elders and feed their children,” he added.

The PPP chief said that “Shaheed Zulfikar Ali Bhutto had said that we will fight for Kashmir for a thousand years if need be”.

“There was a time when Shaheed Mohtarma Benazir Bhutto said that where Kashmiris shed sweat, we will shed blood,” he said. Now, Modi has done a historical injustice to Kashmiri people and Imran Khan’s response is “What can I do?”, he remarked.

“When Zulfikar Ali Bhutto used to give a call for strike in Azad Kashmir, the people of Occupied Kashmir used to observe it as well. Imran Khan tried to find a solution for Kashmir by changing the name of Kashmir Highway to Srinagar Highway. You have to respond to this failed and incompetent prime minister by your votes,” the PPP chief said.

“After electing a prime minister in Kashmir, we will elect a PPP prime minister in Pakistan as well, who will not compromise on Kashmir and will also be able to solve your problems. There is only one party which can not only protect Azad Kashmir, but Occupied Kashmir as well. You have to elect PPP candidate with huge margin. The PPP will serve the people of Kashmir after getting elected on 25 July,” he added.