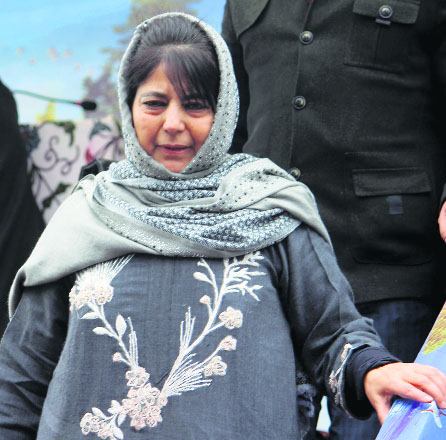 After J&K, the Centre is likely to meet the leaders of Ladakh. The Kargil Democratic Alliance, a body of leaders representing Kargil district, confirmed the upcoming meeting tentatively scheduled for July 1.

The people are feeling stifled. Let them breathe, rest will follow. Govt must realise dissent is not a criminal act. –  Mehbooba Mufti, PDP President

Srinagar: Militants shot dead an SPO in Pulwama district of J&K on Sunday. His wife and daughter were injured, sources said.

Minister of Home GK Reddy is expected to chair the meeting. It is learnt that the representatives of the two districts of Ladakh — Leh and Kargil — are discussing the issues to be raised for the development of Ladakh. A section of leaders have been seeking statehood for Ladakh.

Meanwhile, Peoples Democratic Party (PDP) chief Mehbooba Mufti today said the onus of making the dialogue process on Jammu and Kashmir credible was on the government and a starting point would be “freedom to let people breathe”. “Give the people right to breathe,” the former J&K CM said, flagging the anxieties and anguish of people on the ground “who were being sent to jails for just speaking their minds”. “The people are feeling stifled. Let them breathe and rest will follow. The ongoing suppression in J&K must end for the dialogue process started by the Prime Minister to become credible. The government has to realise dissent is not a criminal act,” Mufti said. She said while the PDP would continue to struggle for the restoration of Article 370 through legal and democratic means, she would personally not contest elections till the special status was restored even though the PDP may participate in elections.Mufti has consistently maintained the stand that she won’t enter the poll fray individually until Article 370 was restored.

The PDP chief also said the region needed healing for any movement forward. The remarks came in context of the government proposal of quick delimitation for early elections in the UT followed by statehood.

“If anyone breathes hard in J&K, they are put in jails,” Mufti said, maintaining that jobs and land rights of the people of the region needed to be protected. “This is the only way for the PM to end ‘Dilli ki doori and Dil ki doori’ with J&K,” she said.

The PDP chief said the principal thing was “end suppression and oppression and understand that dissent does not amount to a criminal act”.