As if the spectacle of snow-capped mountains were not enough, a bunch of friends try out the Atal Tunnel for size and find out first-hand why it is likely to make the journey to Keylong a breeze 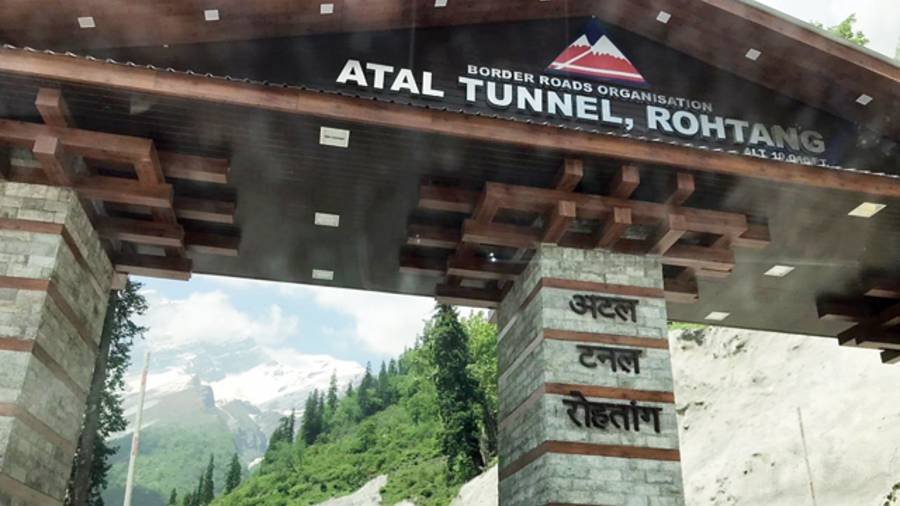 Down the Valley of the Shadow,

“If you seek for Eldorado!”

The pilot and the co-pilot who drove the car christened Blue Dove, a Baleno, were determined to seek their Eldorado as they did “ride boldly ride”. One needs to be equipped with boldness and courage to steer through the narrow tracks with regular threatening turns as one explores the magnificence of the Himalayas.

The pilot who drove the four-wheeler from Gurgaon to Kasol, and then through the Atal Tunnel (Rohtang) to touch the Manali-Leh highway again will surely internalise this journey as she next imparts Theory Of Knowledge. If one is in tune with the International Baccalaureate curriculum, one will vouch for the fact that TOK is one of the most engaging subjects that can be taught at school level.

Her co-pilot of Costa Rican origin Xiomara Maria Rivera Lopez — who teaches Spanish — complemented the pilot by exhibiting the same grit, guts and gumption required to not conquer but embrace the same magnificence. In the back seat, I munched on chips, hoping the munching will subdue the pacing heartbeat and in vain tried playing disc jockey wondering how to blend bachata with bhangra and my vote for John Denver. The three of us in Blue Dove, battling the monstrous eyes in the form of fast-approaching headlights, had our own choices of music, but one common journey.

We were determined to not escape but avoid the hustle, humidity, bustle and the panic of the pandemic. At the cost of ruffling feathers, I think we, humankind, have found an easy solace in blaming the pandemic for everything that is going wrong, from falling efficiency in the workplace to relationships hitting rock bottom. 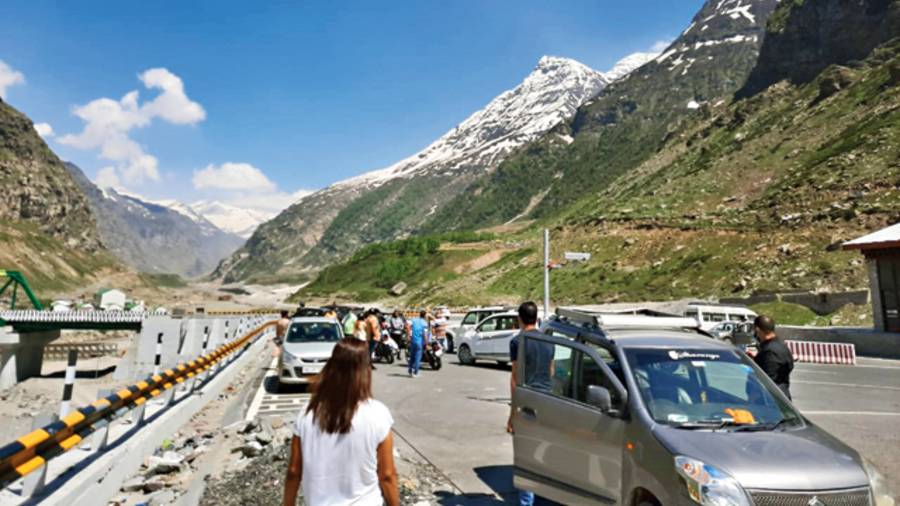 The very thought of travelling might seem taboo during these ‘masked days’. To indulge in a thrill like a road trip, which involved travelling through the longest tunnel in the world above 10,000ft from sea level — isn’t surprising if it earns more than raised eyebrows. We were equipped with the necessities that included the Himachal Pradesh entry pass for tourists, RT-PCR negative results, identity proofs, and voluntarily supported and cooperated with every scanning at regular checkposts, no matter how tedious the process was.

When we started the journey from Gurgaon, our destination was Kasol. We didn’t realise the magnetising pull of the Himalayas would make us stretch the limits and touch the road to Leh.

The first stop for us was Chandigarh, where we rested Blue Dove. I got to see the famous Mohali cricket stadium. The shops were shut, but the eateries were serving customers. It was about a five-hour journey from Gurgaon to Chandigarh. 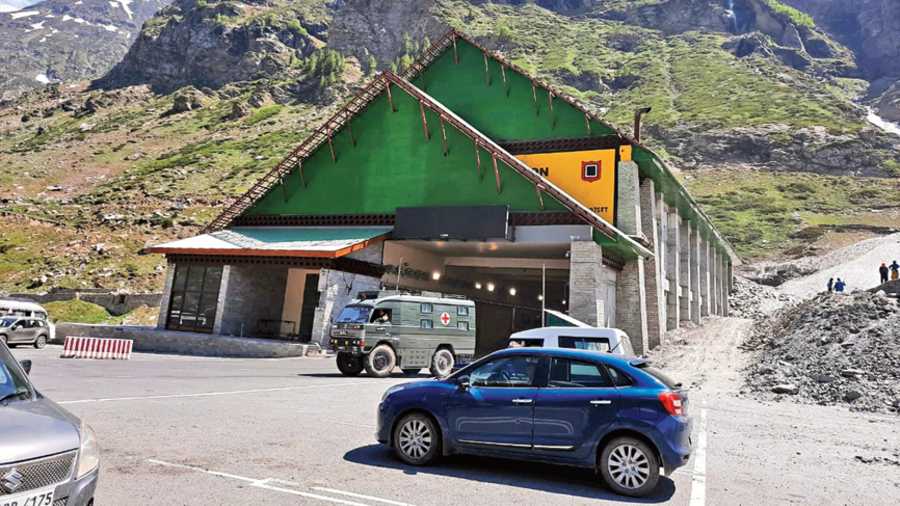 The next destination was Kasol. The journey is believed to be an eight- to nine-hour one along NH154. We firmly believe in the tortoise philosophy, so we were steady, adventurous, but paid heed to hosh over josh.

For instance, when we were caught in a threatening hailstorm in Mandi, we allowed the weather to calm down a bit before ‘gearing’ up to reach the destination.

The manner in which our lady in the driving seat literally steered us through the narrow strips of road and inconsistent weather conditions is admirable and awe-inspiring. The TOK specialist IB facilitator Lopa Sharma was poise personified, especially when fog and dust coupled with droplets and snow pelted out of the blue at Blue Dove.

Driving in the hills is not like driving in the plains. The craggy hairpin turns grow sharper as one climbs higher. The breeze that caresses the cheeks is cooler and the heart races faster when one notices the height reached through car windows. The proficiency with which our pilot embraced the mountain heights makes it difficult to fathom that this was her driving debut on such terrain. It was midnight when we reached our Hill View Hotel in Kasol. 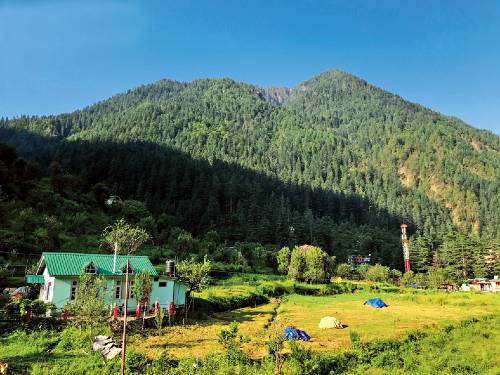 The snow-capped peaks that greeted us next morning were an ethereal sight. It seemed like a gifted painter’s finest painting with pale blue shades and shining unreal white. The purity and greenery not only added to the scenic beauty but also pumped belief in the hearts that soon, once the balance in nature is restored, it’ll be a better place for the entire human race. 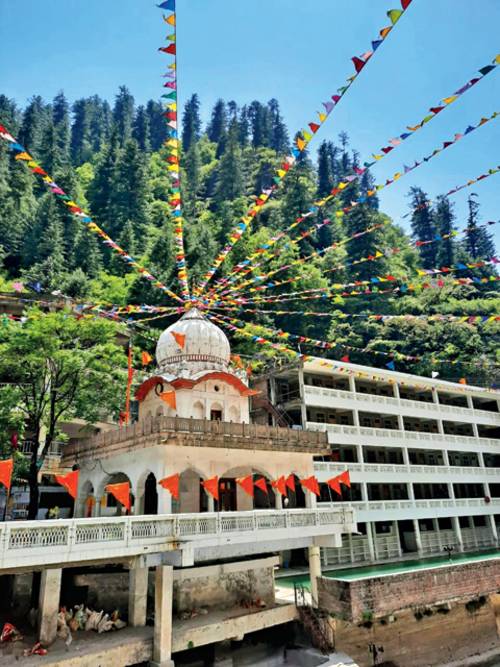 Manikaran Gurdwara near Kasol is a must-visit. If one books early enough, there’s an accommodation facility as well. The place is known for its hot springs and offers free food to travellers. There are small villages near Kasol, like the Tosh village, which one may visit to experience uninterrupted tranquillity.

A visit to Solang Valley is what added the spice to the thrill in our trip. The third day of this once-in-a-lifetime tour was reserved for a visit to Manali. It’s a two-hour drive from Kasol and the place, at this time, is inhabited by work-from-home professionals. The office hours are spent in cafes and bars with music and being lost in smoke. One can’t help but bask in fascination at the Zoom meetings from these resorts and villas that  have added a new dimension to the pandemic-hit work culture. 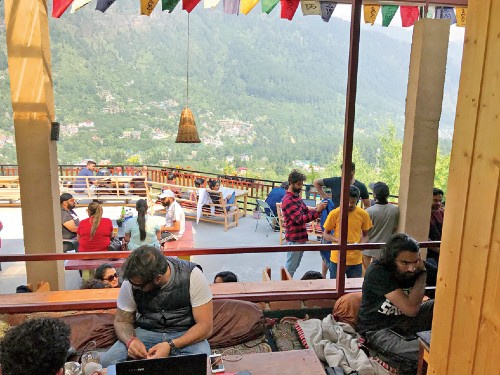 Once we were out from Rocky’s in Manali, we thought of scaling new heights, visiting Solang Valley. We knew the following day would be a day to travel back, perhaps to harsh reality, in the form of hustle, humidity, bustle and lockdown life. The watch read past 2pm and in these parts, the pandemic rules are so strict that paragliding and rafting, along with other adventure sports that add to the charm of a Manali visit, were not operating. This also meant that we wouldn’t be allowed to visit Solang Valley.

On the third and final day of our stay, when we were prepared to head back to Gurgaon from Kasol, our ‘head of the table’ suggested we visit Solang Valley, which meant the journey back would take an extra four hours. Since it would still be she behind the wheels, both Xiomara and I nodded in unison.

Solang Valley is also known as the Snow Valley. A one-and-a-half-hour drive from Solang Valley took us in the direction of the Rohtang Pass. We didn’t know that this was the secret mission of Lopa ma’am. A highway tunnel built under the Rohtang Pass is the world’s longest tunnel above 10,000ft above sea level. This is called the Atal Tunnel. A drive through this almost 10km stretch was easily the high point of this trip. This tunnel has reduced the distance between Manali and Leh by 46km. We reached our destination. 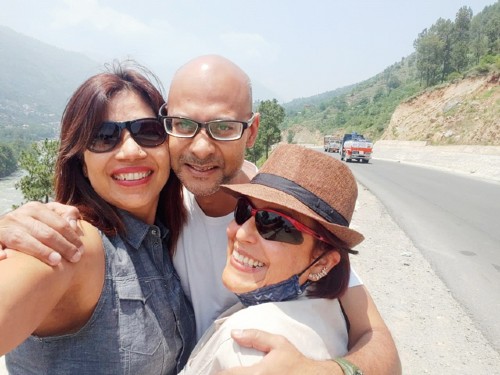 From here, the journey back to Gurgaon would mean 25 hours. It was 4pm already. The journey back was anything but a joy ride. Glaring headlights greeting us at every hairpin curve, sometimes racing towards us. The darkness was interrupted, not by the shine in the skies but the monstrous headlights and vehicles whizzing past.

One didn’t nurture the urge to pump up the volume. Xiomara and I took turns to catch up with power naps while our pilot bravely fought the temptation of allowing the upper and lower eyelids to meet. While we were on the edgy terrain, the calmness of the river Beas accompanied us. The 26-hour road trip to Gurgaon was an experience that the three of us will perhaps recognise as a metaphor.

In the poem Eldorado by Edgar Allan Poe, who was

one of the most influential authors of the 1800s, we find a knight spending a lifetime searching for a land called Eldorado. The last stanza of the poem tells us that the land is found “down the valley of the shadow” and is, perhaps, not attainable to mortals. I personally find ‘hope’ or at least the idea of clinging to hope till the last breath. The journey is important. Destinations may change, may appear unattainable, one milestone may lead to another.

At a time when sheer negativity has enveloped us, and we suffer from disillusionment, I hope we’ll have our Eldorado to search for, Our Gotham city to build and protect. The panic of the pandemic is like a Bane to our Gotham City called Hope. This summer, complying with the Covid rules, I hope we find in us the zeal and the means to travel, anywhere, away from the stress so that we can come back stronger to defeat the despondence once and forever.

Pictures: The author and Lopa Sharma

The author is the founder, Theatrecian, and film studies teacher at Pathways World School, Aravali