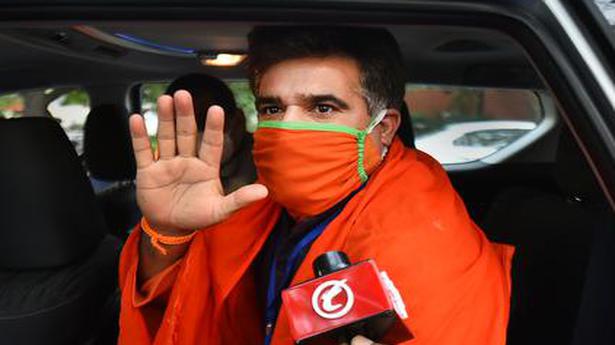 Speaking to reporters at his party headquarters here upon his return from Delhi where he took party in an all-party, he also said the Centre is promise-bound to restore the statehood to Jammu and Kashmir.

Some leaders are still dreaming about the restoration of Article 370 which is “next to impossible”, Jammu and Kashmir BJP president Ravinder Raina said Saturday, advising political parties to leave the chapter behind and take part in assembly polls whenever they are held.

Speaking to reporters at his party headquarters here upon his return from Delhi where he took party in an all-party, he also said the Centre is promise-bound to restore the statehood to Jammu and Kashmir.

“Some leaders are still dreaming about the restoration of Article 370 which gave birth to separatism, terrorism and Pakistani ideology in J&K and claimed lakhs of lives and caused pain to the people. Its restoration is next to impossible. It cannot be restored till doomsday,” Mr. Raina told.

Asked about PDP president Mehbooba Mufti’s remarks that she will not take part in elections till the restoration of Article 370, Mr. Raina said registered political parties should now move on and work for the welfare of the people of Jammu and Kashmir.

“Home Minister Amit Shah made it clear to the participants that he had assured on the floor of the house that the statehood will be restored when the situation gets normal. The Prime Minister had also, in his address to the nation, had talked about the restoration of statehood,” he said.

He said some leaders, toeing their respective party line, are also talking about Ladakh, but they need to understand the region is a separate Union Territory. “Ladakh was carved out of J&K and made a separate Union Territory on August 5, 2019. That is the truth.” Asked about the statement of senior Congress leader P Chidambaram that the Centre wants to hold assembly elections before restoring the statehood to J&K, Mr. Raina said, “He was not in the meeting but there are some leaders in the Congress who are making anti-national statements. They should stop making anti-national statements.” He said all the 14 participants put forth their viewpoint in the meeting and “we also raised all issues concerning Jammu and Kashmir”.

“We became the strong voice of the nationalist people of Jammu and Kashmir and talking on all issues – from delimitation to a dignified return of Kashmiri Pandits,” he said, adding, “we asked the Centre to set up an apex committee to prepare a roadmap for their return”.

Mr. Raina said the BJP delegation highlighted the issues of different sections of the society including the refugees from Pakistan-occupied Kashmir (PoK) and demanded de-freezing of some of the seats reserved for PoK areas in the J&K Assembly which “we are separately raising with delimitation commission shortly”.

He said the prime minister’s assertion that he wanted to end ‘Dilli ki duri’ as well as ‘Dil ki duri’ (distance from Delhi and distance of hearts) during the June 24 meeting makes it clear that the doors of New Delhi are open for the people of J&K.

“The prime minister’s call was to come together in the interest of the nation to fulfil the dream of ‘New J&K and Strong J&K’. The government will ensure adequate funds for all-round development of J&K,” Mr. Raina said.