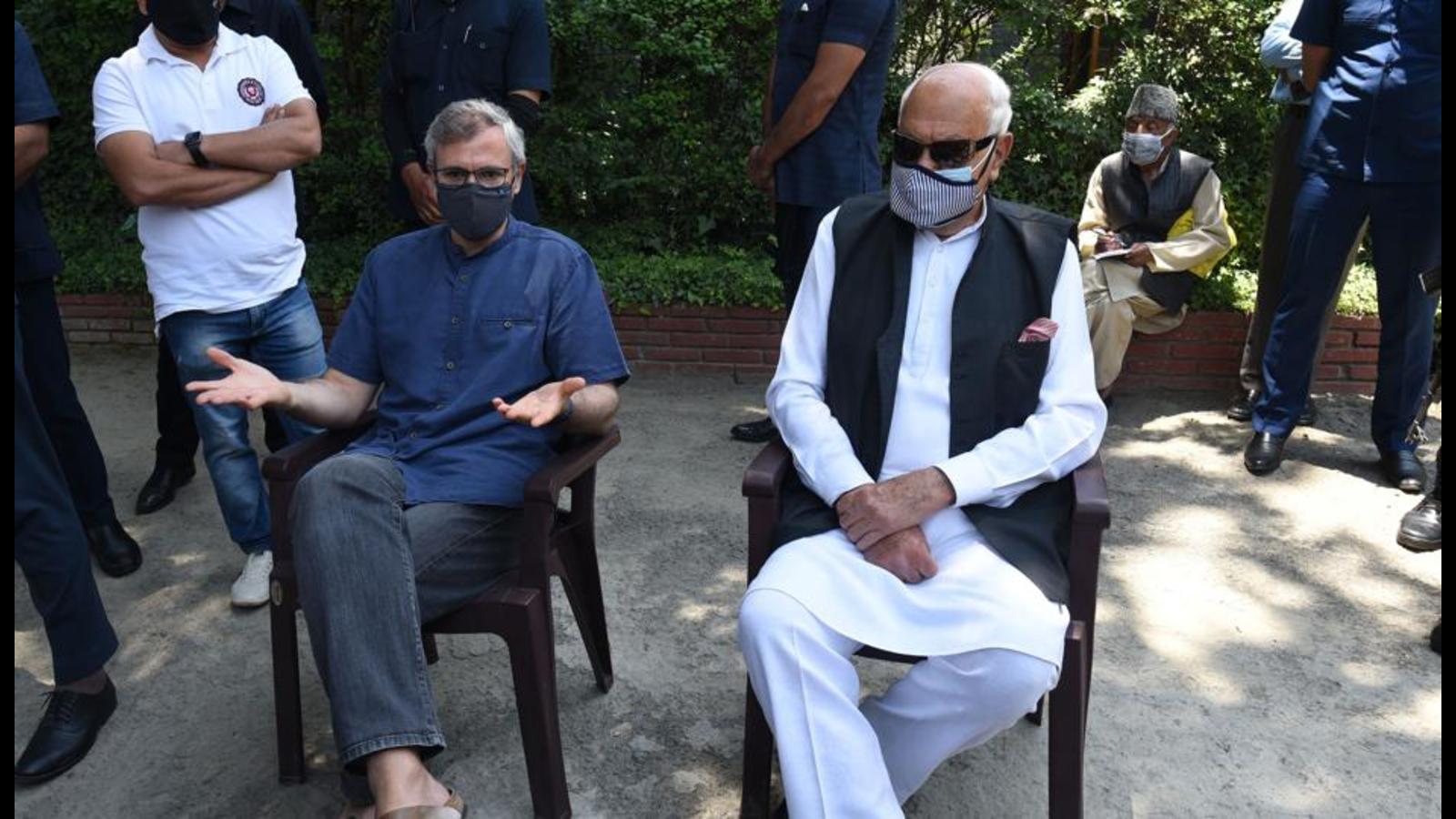 National Conference (NC) chief Farooq Abdullah on Saturday said there was “a level of mistrust” in Jammu and Kashmir and it was for the Centre to remove it, even as his son and former chief minister Omar Abdullah, who is the NC vice-president, demanded restoration of Jammu and Kashmir’s statehood before holding Assembly polls.

Speaking to reporters upon their return from Delhi after attending an all-party meet convened by Prime Minister Narendra Modi on J&K, Omar Abdullah on Saturday said they will continue to agitate over the revocation of Article 370 like the Bharatiya Janata Party did for the Ram Temple issue. He said during the all-party meeting with Prime Minister Narendra Modi, the parties – NC, Peoples Democratic Party and Communist Party of India (M) – which are part of Peoples’ Alliance for Gupkar Declaration (PAGD) talked about the agenda of the alliance before Modi.

“We didn’t talk about anything that was outside the agenda of the Gupkar Alliance. The alliance said that we don’t accept changes of August 5, 2019 and whatever needs to be done to undo that, we will do that constitutionally, politically legally and peacefully,” said Omar.

Leaders from BJP, Congress, J&K Apni Party and People’s Conference also participated in the meeting – the first political outreach since BJP government’s abrogation of the special status of J&K under Article 370 on August 5, 2019 and the splitting of the region into two union territories – J&K and Ladakh.

As the centre brought changes in J&K, it restricted people in J&K to their homes by imposing curfew and snapping communication channels to prevent large scale protests against the move. All the mainstream political leaders including the Abdullahs and PDP president Mehbooba Mufti were put under detention for months.

Following the decisions, a bunch of petitions are pending before the Supreme Court against the effective abrogation of Article 370.

“I don’t believe that just because the issue (of revocation of Article 370) is sub-judice or it is before the Supreme Court that it is not a subject for discussion. Unfortunately, these words (not to discuss because it was sub-judice) were taken by two people – (Congress leader) Ghulam Nabi Azad and (former PDP leader) Muzaffar Beig – during the meeting,” he said.

“Of course it is subject for discussion. It was talked about in our DDC polls. We will continue to agitate the matter legally, constitutionally and peacefully. That is our right and we will exercise that right,” he said.

Omar said that even though so many matters are before the Supreme Court, does that mean we stop talking over them.

“For the longest time Babri Masjid demolition was in front of the Supreme Court, did BJP stop talking about it. They continued to press their agenda on Ram Temple and therefore even if the matter (of Article 370) is before the Supreme Court that does not stop us from stating our point of view and we will continue to do that,” he said.

He said that the NC has authorised Dr Farooq Abdullah to take a view on the delimitation commission as and when necessary. “There has been no fresh approach from the commission to the party. And when it makes an approach, Dr Farooq Saab has been authorized to take a view,” he said.

Farooq Abdullah said, “I made it very clear (in the meeting) that the first prime minister of India (Jawharlal Nehru) promised us a plebiscite but went back on it. Before (1996) elections, Narasimha Raoji promised us autonomy. He said ‘sky is the limit but not independence’. We said we have never asked for independence, we have asked for autonomy. He promised us on the floor of the house. Where is that?

I said frankly there is a level of mistrust and that mistrust has to be removed. How you remove it, you have to take that call. That is why even Dr Karan Singh today has said that statehood must be brought forward. So let’s not jump and see what they do. How do they remove that mistrust or will they continue that mistrust.”

JAMMU
Jammu and Kashmir Pradesh Congress Committee president Ghulam Ahmad Mir Saturday said that the ball was in the court of Centre now, for the positive outcome of the deliberations of the all party meeting by the Prime Minister, where the Congress placed people’s priorities rightly, as per the aspirations of the people of Jammu and Kashmir.

Briefing the senior party functionaries here, after attending all party meet, Mir said that Congress played its role in the right earnest as per guidance of the party high command in consultation with the top leadership and led by Ghulam Nabi Azad, who initiated the deliberations fixing the priorities of the people of Jammu and Kashmir to move ahead for restoration of democracy at the earliest.

He said that broader issues taken up by the Congress in the meeting have been revealed by the leader of the team Ghulam Nabi Azad, which were heard with great patience and rapt attention by the Prime Minister and Home Minister.

“The issue of statehood at the earliest before the elections, transparent delimitation exercise after taking people on board followed by political process besides the demand for safeguards for land and jobs guarantee and other issues were raised forcefully, besides few other important issues,” he said.

He said that all the political parties of different shades invited, responded to the call of the Prime Minister which was a positive indication for the way forward.

“Now it is for the Prime Minister to respond to this gesture and the ball is in the court of the Centre to create conducive atmosphere for future exercise for the early restoration of democracy in Jammu and Kashmir,” he said.