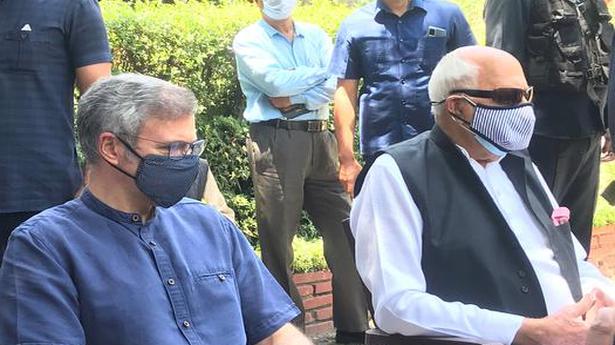 “Not delimitation-election-statehood but delimitation-statehood-election. If you have to conduct an election, return the statehood first. Whenever and wherever we get a chance, we will keep stressing on this,” Mr. Abdullah said, in an interview to a few journalists at his residence in Srinagar, after the Abdullahs returned from Delhi where they met Prime Minister Narendra Modi on June 24.

Referring to senior Congress leader Ghulam Nabi Azad’s remarks made during the meeting with the PM, Mr. Abdullah said, “Before Prime Minister’s address, Mr. Azad expressed the view on behalf of all of us and said that this timeline (delimitation-election-statehood) is not acceptable to us.”

He said all the Gupkar alliance members made it clear that “they don’t accept August 5, 2019 decisions”.

“We will continue to fight peacefully, constitutionally, legally and politically to undo the August 5 decision. We don’t want to betray people. If we tell people that we are seeking reversal of August 5 from Modi Sahib, it would be a betrayal?” he added.

The former chief minister made it clear that the struggle to restore J&K’s special status is a long one. “It took BJP 70 years to fulfil its agenda. If it takes us 70 weeks or 70 months, or whatever time it takes, we will not retract from our mission,” Mr. Abdullah said.

He said the Prime Minister listened to the stand of the members of the Gupkar alliance. “We conveyed to him that people are unhappy,” he said.

Mr. Abdullah said only two leaders, Mr. Azad and Muzaffar Hussian Baigh, referred to Article 370 as subjudice and therefore beyond discussion during the meeting with the PM.

“When the BJP could talk about the Ram temple despite it being before the court (then), why can’t we talk about Article 370? It is a subject of discussion. It was a subject in the DDC polls. We will continue to agitate the matter,” he said.

Mr Abdullah said the people of Kashmir were facing an “unchecked bureaucracy”.

“A Deputy Commissioner arrested someone for merely saying that he wished to talk to local officers as outsiders do not understand him. People are being harassed and arrested. There is unchecked bureaucratic rule and if people say all this is good till there is a decision from the Supreme Court, we will surrender. Wherever people get some kind of solace, we are for it,” he added.

Meanwhile, NC president Dr. Abdullah described the meeting with Mr Modi as “very good” and said people should wait to see if the Centre was ready to remove mistrust existing on the ground in J&K.

“There is a level of mistrust, and that mistrust has to be removed and how you (GoI) remove it, you have to decide. Let’s not jump the gun. Let’s see what they do to remove that mistrust or will they continue the mistrust,” Dr. Abdullah said.