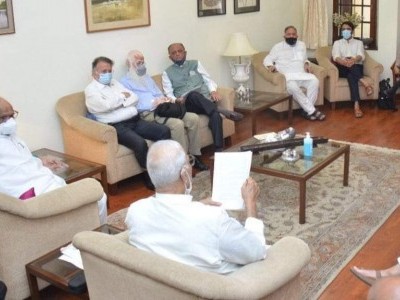 Pune: NCP chief Sharad Pawar on Friday claimed that formation of any national alliance was not the topic of discussion at the meeting of eight opposition parties hosted by him earlier this week, but also said that if any such coalition emerges, its leadership will have to be “collective”.

The aim of the meeting at his Delhi residence on Tuesday was to discuss how they can support the ongoing farmers’ agitation, he told reporters here.

Speculation was rife that the agenda of the meeting, for which no Congress leader was present, was to discuss a possible alliance which could be an alternative to the BJP.

“Currently, farmers are protesting on the borders of Delhi. The protest is apolitical, however, we thought as it is related to agriculture, in which way we can support them…The aim was to come together and discuss how we can help the farmers by raising the issues in Parliament and giving suggestions to the Centre,” Pawar said.

The idea was to come out with a white paper and put forth the issues related to the farm sector before the Union government, the former Union agriculture minister said.

Asked what would be the form of any future alliance against the BJP and what would be Congress’s place in it, Pawar said, “There was no discussion on this, however, in my view Congress will be needed to be taken along if any alternative alliance is to be formed.

“I said the same thing at the meeting also,” Pawar said.

Asked about the prime ministerial face of any such alliance with Congress on board, the NCP chief again maintained that there was no discussion on that issue.

“But in my opinion, there has to be collective leadership. Keeping this in mind we will have to move ahead,” said Pawar, seen as the architect of the ruling Shiv Sena-NCP-Congress coalition in Maharashtra.

Asked about the talk of him leading such alliance, the veteran leader said, “Sharad Pawar did all such things for several years, but now my role will be to help, offer guidance and make efforts to keep everybody united.”

On Prime Minister Narendra Modi’s meeting with leaders from Jammu and Kashmir and the talk of holding elections there, Pawar said he welcomed the move.

On Maharashtra Congress leaders’ statements about contesting future elections without alliance, Pawar said all parties have the right to expand their base.

“To boost the morale of party workers, we all speak (in this way ). If Congress is trying to do the same, we welcome it, because it is their right and they should do it,” he said.