ISLAMABAD, Pakistan: The Chairman of the Parliamentary Committee on Kashmir Shehryar Khan Afridi Saturday said that India is involved in demographic terrorism in the Illegally Occupied Jammu and Kashmir (IIOJK) and the massive transfer of Hindus from mainland India to the IIOJK is a part of a greater plan of India to turn Muslim majority state of Jammu and Kashmir into a Hindu majority state.

Shehryar Khan Afridi expressed these views while addressing the audience at the Report launch on the Illegal Transfer of Population to Illegal Indian Occupied Jammu and Kashmir in International Law held here at the Kashmir Council. 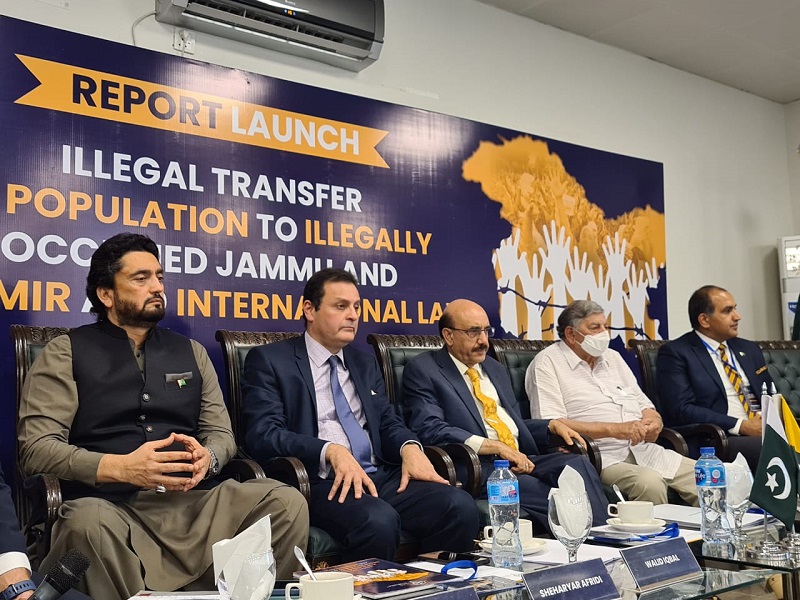 Shehryar Khan Afridi said that Kashmir Committee is the voice of the nation and anything initiated from the Parliament has a direct and deep rooted impact.

He said that Kashmir Committee had decided to add public component into the country’s narrative on Kashmir and formed Advisory Boards to assist the committee.

He said that the advisory boards would have experts from private sector to further the public awareness over Kashmir dispute.

He said that the advisory board on Culture would help develop films and documentaries to tell the misery being faced by the Kashmiri people at hands of the occupational regime of India in Jammu and Kashmir.

He said that the cultural board would help protect, project and promote the Kashmiri culture, its literature, history and heritage as Kashmiri culture is under Indian invasion.

He said that the world needs to be educated on half widows, pallet guns, economic strangulation of Kashmir by Indian occupational regime and the cultural board would help project these issues being faced by the Kashmiri people.

He said that the board on academia would help promote research and education on the issue of Kashmir.

He said that the advisory board on human rights would help raise the Kashmir cause at the human rights forums of the world and for the first time, top human rights activists would be speaking for Kashmiris at the world forums.

He said that the diplomatic front would also help lobbying with the world policymakers and decision makers on the Kashmir issue.

President of Azad Jammu and Kashmir Sardar Masood Khan and other speakers also spoke on the occasion.