Just few hours ago, two low-intensity blasts rocked the technical area of Air Force Station, Jammu raised a very serious concern. While exact details about the origin of blasts are yet to be known, it is assumed that the attack was carried out using some aerial platform possibly a quadcopter.

Just few hours ago, two low-intensity blasts rocked the technical area of Air Force Station, Jammu raised a very serious concern. While exact details about the origin of blasts are yet to be known, it is assumed that the attack was carried out using some aerial platform possibly a quadcopter. If true, these would be the first terrorist attacks in India using aerial platforms or drones. It was sheer luck that firstly the explosive devices were too small and secondly terrorists missed their target and hence no significant damage was caused. While no terror group has taken the responsibility as I write these lines, this is absolutely sure that the terrorists sponsored by the Pakistan government are behind this. However, sooner or later some unknown or lesser-known group will claim the responsibility. Also Read – Breaking News LIVE Updates, 27 June 2021: FIR Registered Under UAPA After Twin Blast at Jammu IAF Base, Probe on

Drones in the hands of terror groups can be lethal and Indian security forces need to think seriously about this. The use of drones by terrorist is nothing new. In October 2016, Coalition Forces in Mosul found ISIS using drones to drop Grenades and explosives over Kurdish Forces as well as Coalition Army. Sometimes they were flying over a dozen missions at the same time. This drone threat was so severe that the Mosul offensive of the Coalition forces was stalled for many days. Today, our Indian markets are swarmed with the cheap Chinese toys and hence the attack on Jammu Air Force Station has triggered a new debate. Today, forget about military assets, a lone wolf can now effectively target civilian assets like Schools, Hospitals and public gatherings too resulting in damage and spread terror. Also Read – After PM Modi’s Meet With J&K Parties, Centre Invites Ladakh, Kargil Leaders on July 1

Fig 1.1 Crater Caused in the roof of the technical Building at Jammu Airforce Station

Some of the openly available vehicles on market for cheap can carry loads of few Kilograms and can pack a lethal punch in themselves with a little improvisation. They are silent, small and there is no foolproof detection measure for them. Even when fully alert, they can be detected only when they are within few meters of the target. Also Read – Jammu and Kashmir: Grenade Attack at CRPF Party in Srinagar, 3 Civilians Injured

Here are a few takeaways from these attacks-

1. Theory of use of drones- The buildings are far off from the perimeter of the Air Force station and hence it is near impossible for any human to come inside the carry out such an attack. It is only possible with the use of an aerial platform. Further, the point of impact of these explosive devices was missed. It is assumed that the terrorists wanted to target the parked helicopters but dropped the load in a haste and with a significant error which resulted in the safety of our equipment. Few uncorroborated media reports confirm that some parts of a drone were found nearby.

2. Motive of the terrorists- When we see the point of impact of these attacks, it becomes clear that the terrorists wanted to target the helicopters parked in the near vicinity of the technical area but due to some reasons they missed the target. This luckily saved precious assets.

3. Unauthorised colonies in the vicinity & lessons from previous terror attacks- Since Jammu Airforce Station is a common facility used by Airforce as well as Civil use, such an attack could be possible from the nearby areas. In the past few years, several unauthorised colonies have come up in the Jammu area. Large chunks of the Kashmiri population, as well as Rohingya infiltrators, were also found in Jammu. The people inside these colonies were primarily from a single community and were getting politically appeased over a period too. Residents of these colonies have been known to harbour the terrorists prior to and after several terror attacks in the Jammu area in the last two decades hence they are sensitive.

4. Easy availability of Drones in the Market- Drones are commonly available everywhere in India in the open market/ online platforms. Some models of DJI (a Chinese company) like S900 can even carry a payload of up to 3 Kgs. This model is easily available in India whereas some other drones like Firefly Alta-8 have the capacity to carry even 9-10 Kilograms (20 Pounds) of payload. This is scary. Furthermore, with the advancement of technology, these quadcopters are quite silent hence difficult to spot them in the night when they are flying at a height. It is very easy for a terrorist to strap on some explosive on these quadcopters, put some improvised release mechanism and use them to cause terror. 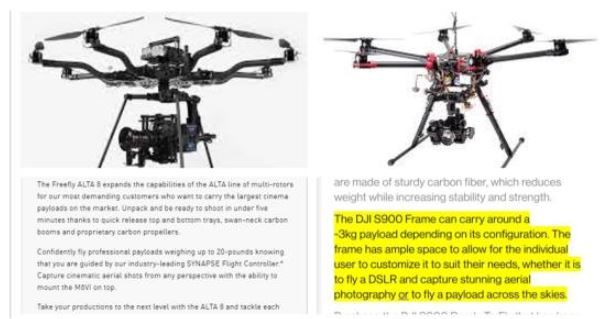 Some of the commonly available drones in India

5. Improvision of the explosive devices- Preliminary eyewitness account revealed that the explosions were of very low intensity. While the one dropped outside the building was not able to cause any damage, the one which hit the roof of the building caused a small crater. As per the experts, both the devices were small and lightweight. Images of the explosion suggest crude bombs to be used in the attack. Some improvised mechanism was adopted to secure the bomb with the drone and release it at a stipulated time.

Although National Investigation Agency (NIA) is carrying out the investigation and exact details will be known later; one thing is sure that India needs to revise its terror response mechanism in view of the current attacks. At the same time, needs to crack down on unauthorised habitation in the vicinity of strategic installations. Today it was a military target but possibilities of a dirty attack on any civilian facility like schools, hospitals, religious places, or festival gatherings can not be ruled out.

Weapon manufacturers are using Artificial Intelligence, Stealth features, advanced robotics, Composite materials, and state of art communication channels to make them more silent, invisible, and lethal. Despite all this, we are still far off from an effective counter-measure against these rogue birds so the only option left with us is that the Government of India must take strong measures to fix the accountability of drone owners and sale of these cheap Chinese toys in India. Maybe a licensing system or mandatory registration of all the drones of an area is required. We must do it now and we must do it without any further delay.

(DISCLAIMER: The views and opinions expressed in this article are those of the author and do not necessarily reflect the official policy or position of India.com. The writer is solely responsible for any claims arising out of the contents of this article.)