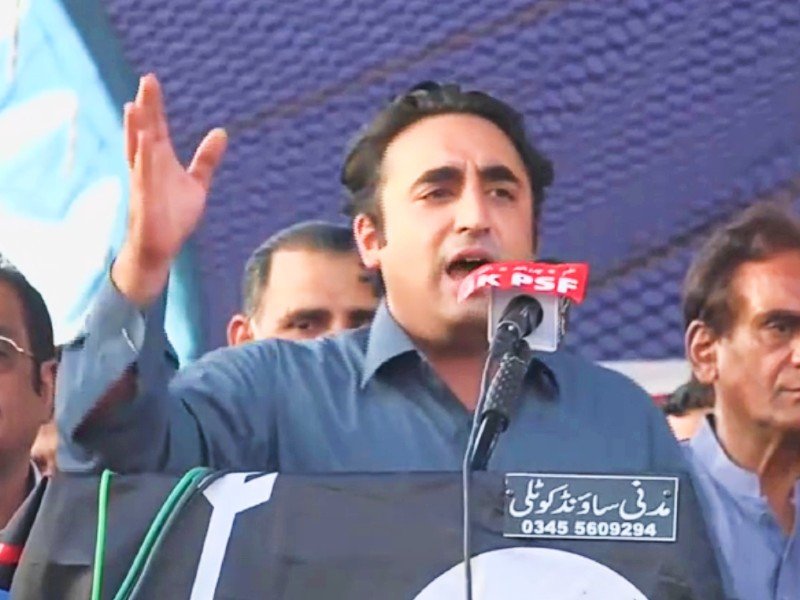 Addressing a rally in Azad Jammu and Kashmir’s (AJK) Kotli, Bilawal, while slamming the premier’s remarks, said that they were irresponsible.

“The selected says we do not need a nuclear programme [if Kashmir issue is resolved]… doesn’t that make him a security risk?” he added.

The PPP leader said that the prime minister has been making mistakes whenever he talks about the Kashmir issue for the last three years and has not been able to form any policy on such a critical matter. “We say to this government that we will not let Kashmir be sold. No one will be allowed to dictate to the Kashmiris… only they will make their decision.”

He said when Indian Prime Minister Narendra Modi revoked the semi-autonomous status of Indian Occupied Jammu and Kashmir (IOJK) on August 5, 2019, PM Imran merely said: “What can we do?”

“What kind of a coward prime minister do we have? Whose orders is he following?” he questioned and added if the people of IOK are facing oppression at the hands of Modi then the people of AJK are also facing the wrath of PM Imran’s government in the garb of inflation and incompetence.

“You will have to give us a majority vote so not only we can tackle the oppression of Modi but also respond to the selected,” he added.

Bilawal said if Pakistan is standing on its feet today, then it is because of the PPP. “Zulfiqar Ali Bhutto gave this country a nuclear programme and Benazir Bhutto the missile programme.”

He said that wherever you go in AJK, you will find infrastructure built during the PPP tenures. “The PPP established 19 colleges in Kotli alone.” He said that those who say that the PPP is finished should come to Kotli and witness the spirit of the people here for his party.

Since his party’s formation, Bilawal said, its policy has always been that the Kashmir issue would be resolved only by the Kashmiris and to date it is still our policy. “Only people of Kashmir can decide their fate,” he further said.

Earlier in an interview with Jonathan Swan of ‘Axios on HBO’, PM Imran had said that once the Kashmir issue is resolved, there will no longer be any need for nuclear deterrence.

“The moment there is a settlement on Kashmir, I believe Pakistan and India will live as civilised neighbours without nuclear deterrence,” the premier had said.