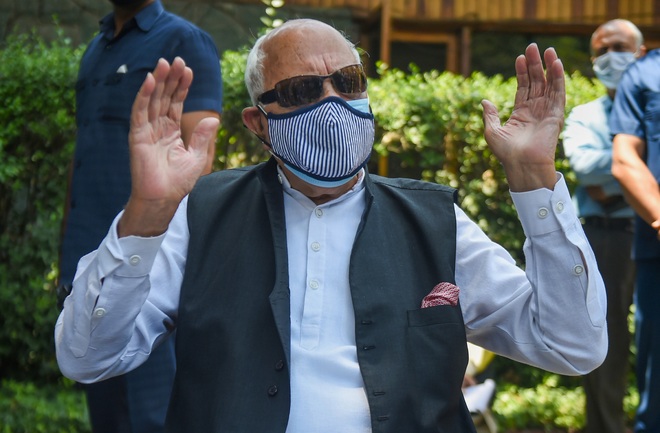 Back in Srinagar after the crucial meeting with Prime Minister Narendra Modi, National Conference leaders Farooq Abdullah and Omar Abdullah again raised their demand for statehood before elections were conducted in Jammu and Kashmir.

NC president Farooq said it was for the Centre to address the prevailing mistrust between Delhi and J&K. He said the next step on the outcome and the way forward after the PM’s meet would be decided after deliberations within the party and members of the People’s Alliance of Gupkar Declaration (PAGD).

Both the NC leaders ruled out any chasms within the PAGD and said the alliance and its purpose were intact and relevant.

Omar said the party had authorised Farooq Abdullah to decide on participation in the next meeting of the Delimitation Commission in which J&K Lok Sabha MPs were associate members. The NC MPs had boycotted the last meeting in February. The PM has called for quick delimitation to enable early elections in J&K.

Addressing reporters, Farooq said India’s first Prime Minister Jawaharlal Nehru had assured a plebiscite to J&K, but that did not happen. “Prior to 1996 elections, then Prime Minister PV Narasimha Rao had promised autonomy from the floor of the House. It was not granted. There is a level of mistrust. We should wait to see whether the Centre will remove it,” Abdullah said.

The Congress, however, rejected any discussion on the plebiscite and stuck to its demand that statehood be restored for elections to happen in J&K.

Omar also said today that Congress veteran Ghulam Nabi Azad had conveyed to the PM on everyone’s behalf in the meeting about the elections-before-statehood timeline not being acceptable.

On Article 370, Omar said the struggle would continue. He said it took 70 years for the BJP to abrogate the special status of J&K. “We will also struggle for as long as it takes,” he said.

New Delhi: Lauding the government’s efforts in making attempts to resolve the “complex Kashmir issue”, a group of retired IPS officers on Saturday wrote an open letter to the PM, expressing hope the promise of bringing economic development to J&K would be fulfilled. Backing the decision to scrap Article 370 and divide J&K into two UTs, the group contended even Pak had started calling for reinstatement of statehood, “which amounts to accepting J&K is an integral part of Union of India”. — TNS