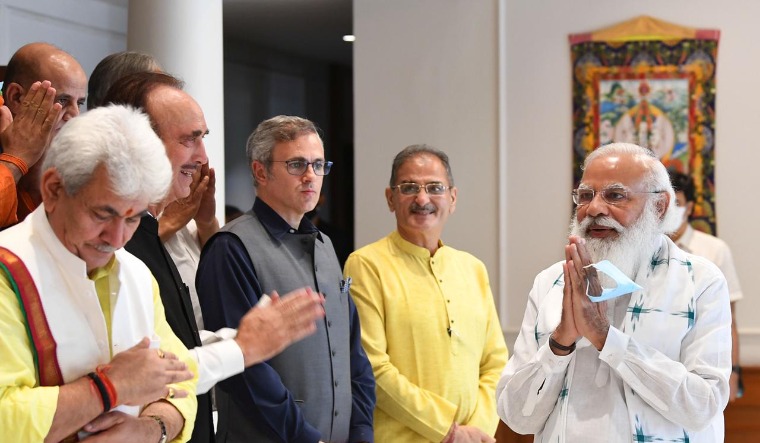 With the Central government linking the restoration of statehood to Jammu and Kashmir to the completion of delimitation of Assembly constituencies followed by holding of Assembly elections first, the process of delimitation has gathered pace in the Union territory (UT).

The BJP government then set up the Delimitation Commission in March last year to set in motion fresh delimitation of Assembly seats in the UT.

They are the Minister of State in the Prime Minister’s Office (PMO) Dr Jitendra Singh and Jugal Kishore Sharma from the BJP (both are residents of Jammu) and Farooq Abdullah, Mohammad Akbar Lone and Hasnain Masoodi, all sitting National Conference MPs from Srinagar, Baramulla and Anantnag, respectively.

The commission has been a non-starter as the NC had challenged the J&K Reorganisation Act, 2019, under which the Centre bifurcated Jammu and Kashmir into the UTs of Jammu and Kashmir and Ladakh and increased the number of Assembly seats by seven seats.

In February, the Union ministry for justice and law increased the term of the commission by six months.

When Jammu and Kashmir was a state, the number of assembly seats were 107 including 24 for Pakistan occupied Kashmir (PoK). Elections in Kashmir were held on 46 seats, 37 in Jammu and four in Ladakh, two each in Kargil and Leh districts. Two MLAs, both women, were nominated.

According to informed sources, delimitation will benefit Jammu as the region is likely to gain five seats and Kashmir two.

Observers believe the delimitation has been set in motion by the BJP government to shift the balance of power from Kashmir to Jammu.

With the NC expressing willingness to participate in the delimitation exercise after the meeting with Modi, the commission is likely to submit the report before the expiry of its term in October. In which case, the Assembly elections could be held in the UT before winter or latest by March.

A day before Modi met leaders from Jammu and Kashmir, the ECI held virtual discussions on delimitation with the deputy commissioners of the UT, who are also the district election officers.

On June 8, the commission had written to all 20 deputy commissioners of the UT to share data pertaining to electorates and other information in their districts and the Assembly segments.

After delimitation, there will be up to 12 seats reserved for scheduled castes (SCs) and scheduled tribes (STs). In the previous Assembly, seven seats were reserved for the SC category—Chhamb, Domana, R.S. Pura, Samba, Hiranagar, Chenani and Ramban.

After the fresh delimitation, Assembly seats will be reserved for the first time for the STs.

J&K being the only Muslim-majority state in India, reservation to SCs has benefited only the minority (Hindus).

Observers believe the BJP has condoned the demand for the restoration of statehood and completion of the process of delimitation and election because it would want to benefit from the process in the election.

The party will propagate the increase in the number of seats to Jammu as one of its major achievements.

There are chances that the Delimitation Commission could also reserve seats for the West Pakistan refugees who were granted full citizenship rights in Jammu and Kashmir after the abrogation of Article 370. There is also talk of reservation in the Assembly for Kashmiri Pandits. The move will strengthen the prospects of the BJP in the elections in Hindu-majority Jammu region.

The BJP is hoping to return to power in Jammu and Kashmir by pandering to the regional aspirations of Jammu and wooing parties like the J&K Apni Party, which was formed by former PDP leader and minister Altaf Bukhari—with the backing of the saffron party after the reading down of Article 370—and J&K People’s Conference led by Sajad Lone. Lone had allied with the BJP in 2015 elections and won two seats from Kupwara. He was made a minister after the BJP formed a coalition with the PDP. The coalition collapsed in June 2018.