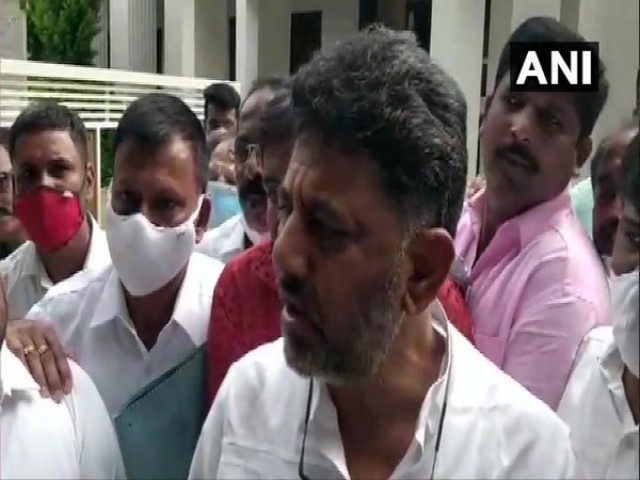 Belur (Karnataka): Amid political turmoil in the state, Karnataka Congress president DK Shivakumar on Friday welcomed new leaders to the party and advised them not to indulge in groupism.

While speaking with the reporters at the Congress Party office, Shivakumar said, “Whoever comes from other parties and joins Congress needs to follow the party’s ideology, instead of indulging in groupism.”

Shivakumar advised leaders to make public statements in favour of a ‘person’ instead of the party. Shivakumar made this statement after several leaders like Zameer Ahmad, Bheema Naik, Kampli Ganesh, Akhanda Srinivas Murthy and S Ramappa said Siddaramaiah must be the next chief minister of the state.

Senior Congress leader Siddaramaiah on Thursday had asked MLAs not to make public statements and project him as the chief ministerial candidate for the 2023 assembly polls, even as there is a perceived split within the party on the issue with factions loyal to him and state unit president Shivakumar.

Shivakumar on Friday also said that they need to follow the guidelines of the Congress party. “Worshiping a person or creating groupism doesn’t serve the purpose of the party,” he said.

Shivakumar also sternly said that this behaviour cannot be accepted at any point in time and trying to make groups in the Congress Party cannot be tolerated. He also asked party leaders to be cautious when welcoming anybody to Congress party.
Earlier on Friday, Shivakumar slammed the Centre for not taking the COVID-19 vaccination drive seriously in the country. In a tweet, he wrote, “Black fungus refuses to go away. Delta Plus has arrived, as if to assure us there will be a third wave. April and May were a nightmare,but did June really bring a new dawn? This suffering and uncertainty is the price we are paying for the Govt not taking vaccination seriously.”

“I wish I could give you false hope but the pace of vaccination in Karnataka is just not fast enough to prevent a third wave. We need to go faster, higher, stronger,” the Karnataka Congress president tweeted.