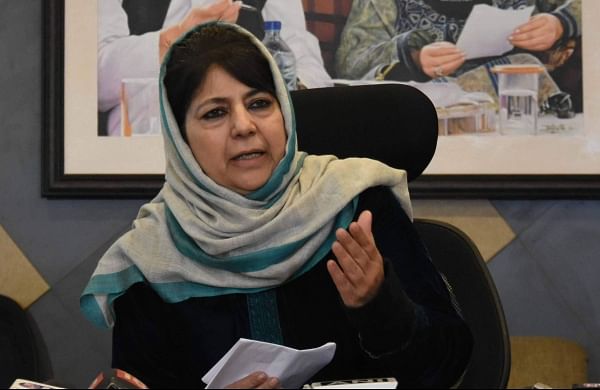 NEW DELHI: PDP president Mehbooba Mufti on Friday said she herself will not contest any elections until special status of Jammu and Kashmir is restored and stressed that the central leadership should focus on ensuring “dil ki doori” with the people of the erstwhile state is removed.

The former chief minister emphasised on removing the “draconian” orders that were passed on August 5, 2019, on abrogation of Jammu and Kahsmir’s special status.

The “era of suppression and oppression” has to come to an end, she said.

“I have made it clear many times that I would not contest any elections under the Union Territory, but at the same time my party is also aware of the fact that we will not yield political space to anyone. We contested the District Development Council elections held last year,” Mehbooba said.

“Similarly, if elections are announced for the assembly, the party would sit and discuss,” the PDP president told PTI here.

However, Mehbooba, who was part of the 14-member delegation that met Prime Minister Narendra Modi on Thursday to discuss the road forward for Jammu and Kashmir, emphasised that there is a need for taking many confidence building measures.

These include providing relief to the tourism and trading community of Jammu, Kashmir and Ladakh regions, she said.

“Dil ki doori (distance of hearts) has to be decreased with the people of Jammu and Kashmir and for that all the draconian orders passed have to stop. It’s an era of oppression of suppression in Jammu and Kashmir nowadays,” the PDP leader said.

“Anyone who has a grievance against an officer is booked under preventive detention, giving vent to genuine feelings on Twitter lands you in jail. Is this what is called democracy,” she asked.

Mehbooba said there is an immediate need to put a full-stop to such actions and allow people to breathe freely.

The 14-member delegation not only met the prime minister, but also Union Home Minister Amit Shah and senior bureaucrats.

The other members of the delegation were former chief ministers Farooq Abdullah, Ghulam Nabi Azad and Omar Abdullah.