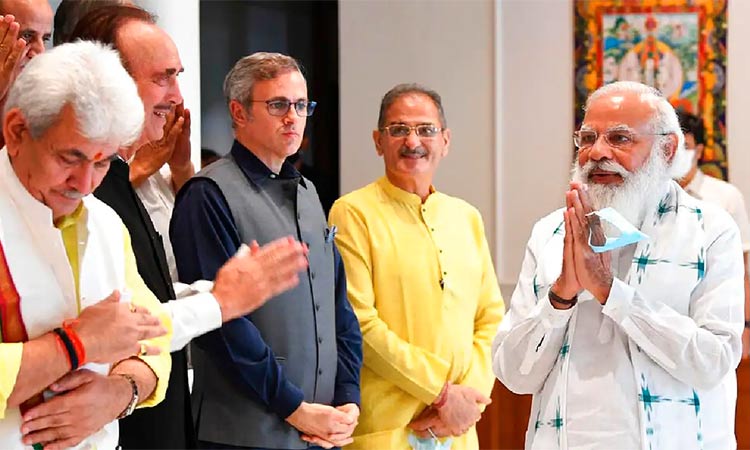 Narendra Modi held a crucial meeting with political leaders from the Union Territory of Jammu and Kashmir on June 24 for the first time after the abrogation of Article 370. Associated Press

The Indian prime minister’s meeting with the political leaders of Jammu and Kashmir on Thursday was meant to be an icebreaker of sorts. It was not meant to achieve any breakthrough. The state has been given a shock treatment as it were when the Modi government nullified the state’s special status guaranteed through Article 370 of the Constitution, though it was meant to be a temporary guarantee.

The government had also removed Article 35A of the Jammu and Kashmir state constitution with restrictions as to who could buy or possess land in the state, and how a woman who is a citizen of the state would lose her domicile right to own land if she married an outsider. The government did not stop there. They turned the state into a Union Territory, and separated Ladakh, the mainly Buddhist Himalayan region from the state, and made it a Union Territory. The union territory is less than a state or province in the constitutional scheme. The union territory comes under the direct control of the Union federal government.

Most of the provincial leaders were also kept under house arrest for a year and more. The government said that these were precautionary measures to prevent protests from breaking out. It seemed that the ploy had worked, and the people of the state remained passive.

The acts of terrorism by a few extreme elements, which the Indian government believes are supported by outsiders and emanate from outside territory, have also decreased according to officials. The leaders had talked of restoring Jammu and Kashmir to full statehood which it had enjoyed before August 2019, and there was also a muted demand from Peoples Democratic Party leader Mehbooba Mufti. Reports quoted her as saying that it was the Indian government and prime minister Jawaharlal Nehru, and not Pakistan, who had given Jammu and Kashmir special status under Article 370. National Conference leader Omar Abdullah had indicated that his party will fight the legal battle for restoration of Article 370.

Prime Minister Modi seems to have heard all the views, but he did not respond directly. He tweeted about the meeting saying, “Our democracy’s biggest strength is the ability to sit across a table and exchange views.” He had however expressed his views in two other tweets. He said that his government’s priority is to “strengthen grassroots democracy” and that delimitation – reconfiguration of constituencies — should happen quickly so that elections can take place and there could be an elected government. And in the same tweet in which he talked about exchanging views, he said further, “I told the leaders of J&K that it is the people, especially the youth, who have to provide political leadership to J&K…” There is a clear hint here that the prime minister is looking beyond the present group of J&K leaders and he wants new leaders to emerge.

This is indeed the plan of the Modi government when it dismantled Article 370 and Article 35A. The prime minister and his party BJP believe that the controversial state, which is the bone of contention between India and Pakistan since Independence, and over which they had fought wars in 1948 and 1965, and a skirmish in Kargil in 1999, has to be fully integrated into the Indian state, legally and politically.

The big question of course is whether Mr Modi’s plans to solve the Kashmir question at least from the Indian side will succeed through the measures he has chosen. Some think that removal of Article 370 and Article 35A was a shock-and-awe measure, and that it would not work. Perhaps Mr Modi too has second thoughts, and he wants to sincerely find a political way to deal with the issue.