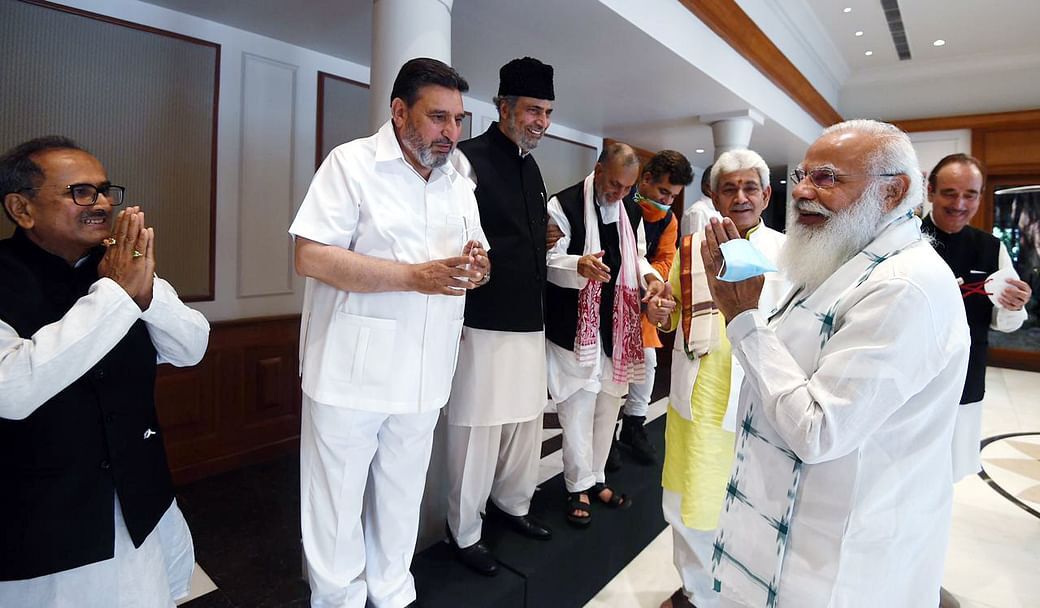 The meeting held between the Central government and leaders from Jammu and Kashmir is said to have opened a new chapter in the politics of the Valley. The logjam that had ensued soon after the abrogation of Article 370, forming a crevice between the Kashmiri leaders and the Central leaders now seemed to have disappeared.

Kashmiri leaders belonging to the various political parties, including Congress, the National Conference, the PDP and the CPM have met Prime Minister Narendra Modi, and Home Minister Amit Shah in New Delhi, accepting an invitation from PM Modi as a trigger to move further.

Most of the Kashmiri leaders, who ensured their presence in the meeting, had been subjected to various kinds of incarceration for more than one year during the tumultuous times following the repeal of Article 370. After the meeting, the leaders seemed content with the Centre’s new move to normalise their ties with the Union government.

The delimitation, holding of Assembly elections and restoration of the statehood of Kashmir were presented by the Prime Minister as the main focus of the Centre-Kashmiri leaders’ meeting. The National Conference chief Farooq Abdullah, the PDP chief and former Chief Minister Mehbooba Mufti and the Congress leader Gulam Nabi Azad were among the eight party leaders who met the Central government leadership.

The Kashmiri leaders admitted after the meeting that they did not find any difficulty in talking their minds in the meeting. Despite their objections to certain issues related to delimitation and the restoration of the statehood, the leaders are found to have agreed to the Centre’s proposed methods as a process to hand over the power to the Kashmiri people.

PM Modi emphasized that the Centre is committed to restoring the democratic process in the valley. He urged the leaders to be on board this process whereby the statehood can follow after the Assembly elections. Before the elections, the delimitation of regions should be undertaken and the leaders have been requested to extend their full support to the delimitation process.

The Union Home Minister Amit Shah said that it was the Centre and people of Kashmir’s desire that the democratic values should be restored. All leaders concerned are committed to bringing democracy alive in the Valley and had agreed on realising the set democratic goals, including the delimitation exercise and peaceful elections as key milestones in restoring statehood, Shah added.

Despite differences, all party leaders are in the same league that is demand for the restoration of statehood. The Congress leader Ghulam Nabi Azad insisted that the statehood status should be restored as a precursor to the Assembly elections. Azad is also said to have demanded that the Union government should protect the domiciliary rights of Kashmiri people related to the land and state services and measures to rehabilitate Kashmiri Pundits.

But the Centre is keen to hold Assembly elections before reinstating the statehood. As of the release of the political prisoners, as many as 75 leaders are still behind bars under the National Security Act since the abrogation of Article 370, Azad said. The government has assured that their release would be considered after reviewing the situation.

The senior Congress leader, who got the first chance to talk, said he refrained from raising the restoration of Article 370 in the meeting since it is a matter that is before the Supreme Court. But that was not the case with PDP supremo Mehbooba Mufti who made remarks referring to Article 370.

Mehbooba Mufti was heard talking to the media after the meeting that the people of Kashmir will democratically, constitutionally and peacefully struggle to reinstate Article 370. Calling the repeal of the Article, unconstitutional, illegal and immoral, she said the BJP struggled for 70 years to abolish it. She said the provisions of Article 370 have not been the gratuity given by Pakistan but the rights of the Kashmiri people granted by India and Nehru.

The National Conference opposed the means of delimitation but assured the party’s full cooperation with the process. The NC leader Omar Abdullah was of the opinion that whatever the move the Centre makes in regards to the promises it has made in the Parliament will eventually help the Kashmiri cause of reconciliation with the Union government.

However, Omar Abdullah is not happy with the proposal for the delimitation which he sees as an exercise to single out J&K. He said the delimitation process would further alienate J&K from the rest of the country. He urged the Centre to review its decision to go ahead with the delimitation exercise, pointing out that it will raise several suspicions. But he does not want to be an impediment in the process, saying that his party will consider taking part in the process if a fresh invitation is received from the Delimitation Commission.

The CPM representative was also unhappy with the delimitation proposal. On the heels of Omar Abdullah, the CPM leader from the Valley, Mohammed Yousuf Tarigami questioned the Centre’s intention to go ahead with the exercise in Kashmir while the announcement of the same in other states, including Assam and West Bengal, was held up and it conducted State Assembly elections. But for him also, the meeting gave a new impetus in building trust with the Centre.

As a response to all the apprehensions raised by the Kashmiri leaders, the Union Home Minister Amit Shah announced that the recommendations and suggestions would be taken into consideration in any matter related to the delimitation and the restoration of the statehood. However, he neither announced a date nor gave a hint when the process will finish and hold Assembly elections, but said the statehood will be restored at the right time.

What transpired after the meeting, which was said to have been held without any set agenda besides the key topics pertained to the delimitation and Assembly elections where the leaders from the valley were asked to talk any subject freely, the leaders who have endured much humiliation following the abrogation of the Article 370 appeared to have forgotten the ordeal they all had undergone.

Reports said that the leaders and the Central leadership did not hold up in cross-talks and heated arguments. PM Modi is said to have heard them all patiently and promised that the government will take all requirements that can ensure a peace zone in the region.

Although the talks were described as a first step in the direction of dialogue, there was neither any reference to a subsequent meeting nor any indication about one.