Taking the first steps for restoring the long-stalled political process in Jammu and Kashmir, Prime Minister Narendra Modi on Thursday urged leaders of 14 political parties from the UT to join the ongoing delimitation process and said the exercise must conclude quickly to enable an early poll and an elected government in the region.

Full statehood is important to restore trust. Delimitation must be revisited — Omar Abdullah

The border is peaceful, there can’t be a better time to restore statehood — Ghulam Nabi Azad

The people will never accept 370 abrogation. Will fight to get it restored — Mehbooba Mufti

A very positive meeting, we are hopeful — Sajjad Lone

PM heard everyone. They poured their hearts out —Altaf Bukhari

“Our priority is to strengthen grassroots democracy in J&K. Delimitation has to happen at a quick pace so that polls can happen and J&K gets an elected government that gives strength to J&K’s development trajectory,” the PM said after a three-and-a-half-hour-long comprehensive discussion with the leaders of mainstream J&K parties on the future of the area.

We have demanded that full statehood with J&K’s independent cadre be restored to us as a measure of confidence-building.

While the PM described the meeting as “an important step in the ongoing efforts towards a developed and progressive J&K,” all attendees said the discussions happened in a “very cordial atmosphere and the PM spoke of reducing “Dilli ki doori and dil ki doori.”

In their first interaction with the PM since the abrogation of Article 370 and bifurcation of the state on August 5, 2019, the People’s Alliance for Gupkar Declaration said restoration of full statehood was necessary to rebuild “the lost trust between the Centre and the people of J&K.” 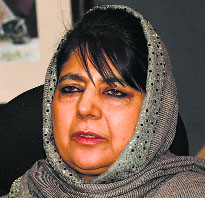 People are angry and humiliated. They do not accept the way in which Article 370 was abrogated.

National Conference chief Farooq Abdullah and PDP president Mehbooba Mufti both flagged the abrogation of special status as “unconstitutional” but said they would contest it legally since the case was pending in court. Speaking for the NC, Omar Abdullah said the party did not accept the August 5 decision, but also did not believe in taking the law into its hands.

“The matter is before the Supreme Court and we hope to get justice. We will continue our legal fight for the restoration of J&K’s special status. Also, we have demanded that full statehood with J&K’s independent cadre be restored to us as a measure of confidence-building. This is important to restore the lost faith of our people. We also do not believe that the distance of hearts can be bridged with this one meeting. But yes, restoration of statehood would be a good starting point to bridge this gap of hearts between Delhi and J&K,” Omar said, adding that the delimitation exercise was needless. The NC, at the meeting, urged the PM to have a relook at the delimitation issue, with Omar saying later, “If the aim of August 5, 2019, decisions was to mainstream J&K with India, why set it apart with an early delimitation when the exercise in the rest of the country will happen in 2026?”

Home Minister Amit Shah, however, categorically clarified after the meeting that the future of Jammu and Kashmir was discussed and the delimitation exercise and peaceful elections were important milestones for restoring statehood, as promised in Parliament.

While most participants appeared reconciled to the criticality of delimitation, they did make an aggressive local pitch. Mufti termed the talks with the PM as “very cordial” but added that the people of J&K did not accept the unconstitutional and illegal abrogation of Article 370.

The Congress led by former J&K CM Ghulam Nabi Azad asked for restoration of statehood before the elections in J&K and reminded that the government had said the promise would be fulfilled at an appropriate time.

“We told the PM that there can be no better time to restore full statehood in J&K and conduct elections. He, however, said delimitation should happen first and then elections and statehood will follow,” said Azad. He added that the PM agreed with all parties that bureaucratic rule could not replace political rule and the two were way different in the nature of outreach.

All other participants, including People’s Conference’s Sajjad Lone, former Deputy CM Muzaffar Baig, and Apni Party’s Altaf Bukhari hailed the meeting for its “cordiality and great atmospherics”, saying the PM “heard everyone as they poured their hearts out and shared the anguish and pain of J&K’s people and assured early restoration of the democratic processes in J&K.”

NSA Ajit Doval, Lt Governor of J&K Manoj Sinha and Minister of State in the PMO Jitendra Singh too attended.