Four students, who were arrested from Ladakh in connection with a blast near the Israel Embassy here in January, were sent to 10-day police remand by a magistrate court, officials said on Friday. 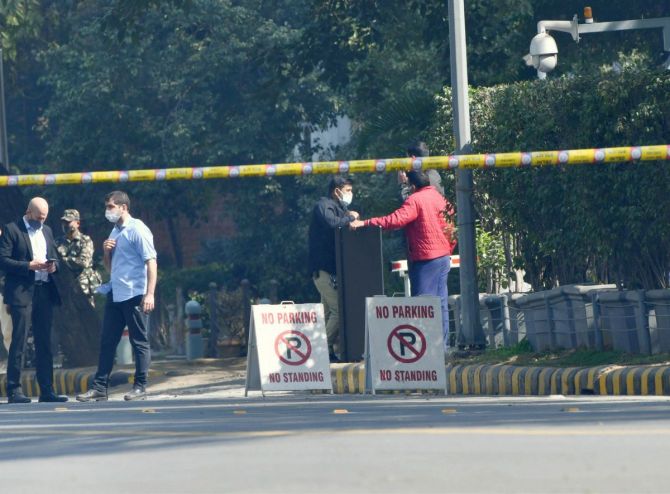 The students were arrested from Kargil on Thursday and brought to Delhi on transit remand, they said.

A minor IED blast took place outside the Embassy of Israel in the heart of Lutyens’ Delhi on January 29. There were no casualties.

Some cars were damaged in the explosion that occurred about 150 metres away from the embassy on the Dr APJ Abdul Kalam Road.

The four students have been identified as Nazir Hussain, 26, Zulfikar Ali Wazir, 25, Aiaz Hussain, 28, and Muzammil Hussain, 25, the police said, adding that all of them are residents of Thang village in Ladakh’s Kargil district.

“They were presented before a magistrate court on Thursday which sent them to police remand for 10 days,” a senior police officer said.

They had come to Delhi in November last year and were preparing for competitive examinations, he said.

All four of them were in Delhi on the day of the incident and their phones were found to be switched off, police said.

During interrogation, the suspects have been questioned about their period of stay in Delhi and why their phones were found to be switched during the time of the incident, police said.

The police are likely to conduct searches at the locations where the students stayed in Delhi, including Mukherjee Nagar area where they had been staying for a brief period while preparing for competitive exams, they said.

Further investigation into the case is underway.

In a joint operation with a central intelligence agency and the Kargil Police, the Special Cell of the Delhi Police had detained the four persons in connection with the conspiracy to plan and execute terror activities in the national capital, a statement issued on Thursday quoting Delhi Police PRO Chinmoy Biswal had said.

The Delhi Police Special Cell, which was probing the incident, had registered a case of ‘conspiracy’ behind the blast.

The Ministry of Home Affairs had handed over the probe of the blast to the National Investigation Agency on February 2.

Recently, the NIA announced a reward of Rs 10 lakh each for identification of two people captured on CCTV camera.